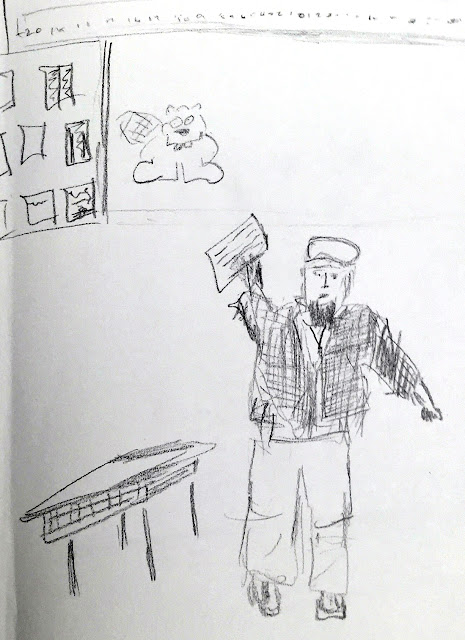 Here's an overview - cribbed from my official "narrative report/evaluation" of my recent residency (following the ones at Eielson and in Eagle) throught the Artist In Schools program that the Fairbanks Arts Association fosters in conjunction with the school district. This was a bit different, as the Golden Heart Academy itself is housed inside the Fairbanks Youth Facility, which was definitely unique opportunity to reach an under-served and over-looked population.
More below the fold...


It also made for some logistical speed-bumps from abiding by the facility’s restrictions in an understandably highly controlled setting - paying attention to little details like no staples, or not being able to bring in my usual implements like dip-pens, and learning to use little rubber pencils were among the many adjustments made. But aside from those, it wasn’t any different than other residencies in that there were some talented students who participated that were really into it, and I made a personal connection with some individuals, and hopefully provided a positive example of alternative ways to express themselves. Art changes lives in my experience, specifically it was cartooning that kept me out of a whole lot of additional trouble when I was growing up every year in fact. 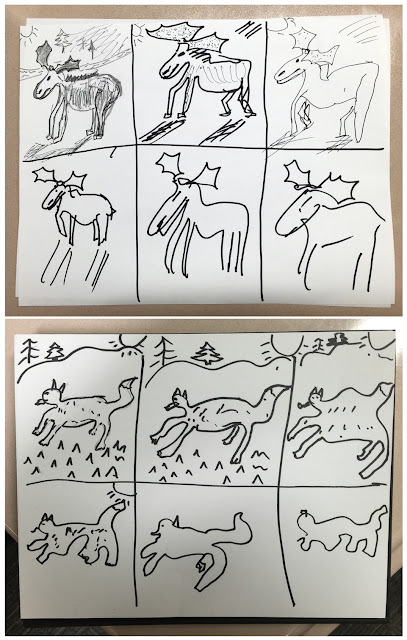 Over the course of the five-day residency (second week of December, 2017) we explored cartoon and comic art through daily in-class exercises to get warmed up, and experiment with various techniques in character development, generating ideas, collaborative cartoon “jams,” single-panel “gags,” comic strips, and longer one-page narratives. The final result was after collecting the student sketchbooks to review their homework, a group comic-book that documented the residency was published for everyone to have a copy of. At the release party I expressed my hope to someday read a graphic novels created by each of them. 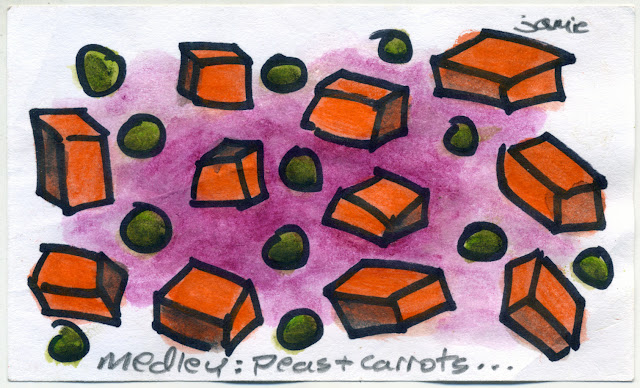 Along with demonstrations and examples of my work from my portfolio, we discussed the process by which cartoons are created, and shared ideas about possible commercial applications using their artwork. Faculty and staff there were very supportive and welcoming, the students engaged and creative. Due to facility regulations and restrictions, exposure and interaction to other faculty/staff not directly observing or participating in specific classes was by necessity limited. That was offset to a degree by daily sharing in lunches and open/free periods. 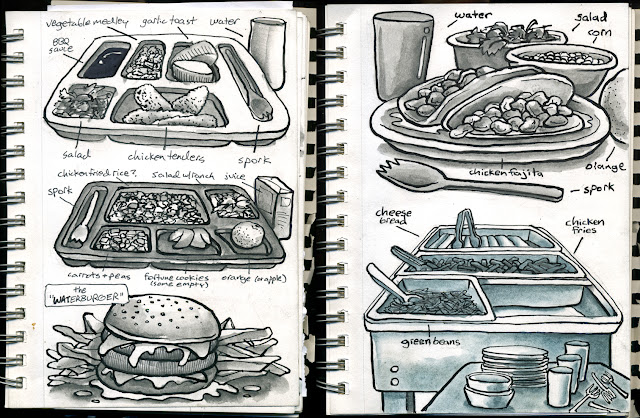 Here's a scan from my sketchbook of the meals: normally during these residencies the artist is supposed to spend time creating their own work in a public area so folks who are otherwise not directly taking a class with me can interact and observe works-in-progress, or even just hang out and draw or read some comics. Given the nature of the institution that was a challenge, so I opted to join them for lunch, and doodled out the daily menu. It dovetailed quite nicely with the past couple years of similar activities with the Fairbanks Urban Sketchers group. Also I never knew chicken could take so many varied forms... Time spent practicing in-class exercises and completion of homework assignments was credited to student coursework for the week, as was attendance. Components of the student work involved both elements of literacy skills (ostensibly it was an English class), like wordplay for example, and artistic craftsmanship (drawing). This all made for a successful evaluation when it came to setting and meeting learning objectives for the residency. 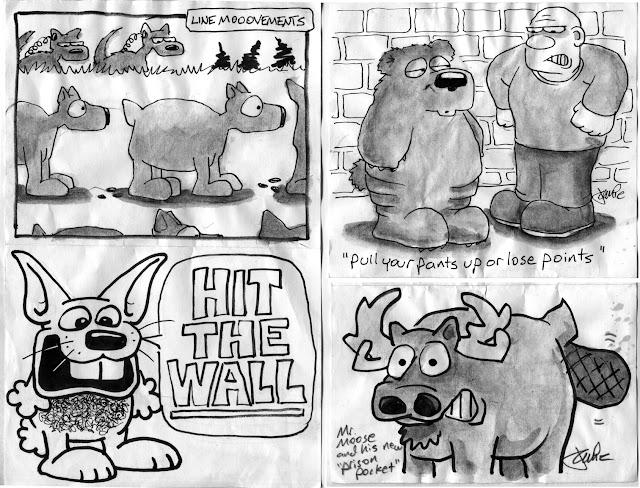 Basically it was an extreme condensation of the battery of things covered in any one of my usual classes. I provided instruction in basic skills in creating both cartoons and comic art, and handouts and samples of my own work including the process: from generating ideas, to sketching with pencils, composition + layout, pen & ink techniques (mark-making with different textures such as hatching, crosshatching, stippling, scumbling, and watercolor wash); demonstrated techniques in all of the above; maintained keeping of individual sketchbook journals; lectured on legibility of lettering; explored and discussed different types and formats of cartoons (single-panel/gag, editorial, comic strips, minicomics, collaborative aspects, traditional comic books); lectured about commercial and freelance illustration opportunities and graphic novels along with showcasing publications by former students; demonstrated and assigned various exercises in increasing drawing skills; demonstrated and experimented with various materials and techniques; reviewed homework and critiqued individual extra-curricular efforts; retrieved sketchbooks and collected in-class assignments to cull for publishing samples of student works in the resulting school comic book.

"Secure”: Hearing in-house lingo like “May I cross?” for permission to move around, and learning about “check-in," T.O. (temporary orientation), points meetings (behavior = points = levels (steps) = privileges (ex: stay up later, coupons, phonecalls, outings, personal clothing), jobs like laundryman, vacuum cleaner, classroom man, window cleaning, multi-tasking etc. A different world with tightly structured rules and regulations. As true with residencies in general, there was a lot of interesting observations made while immersed in a completely different environment, details about daily life that show up in sharp contrast to the normalcy of established routines and habits. They also serve to throw into sharp relief the choices made - consciously or unconsciously - while navigating throughout the week, so for me it was a another reminder to not take for granted so much of what is simply assumed to be "normal." 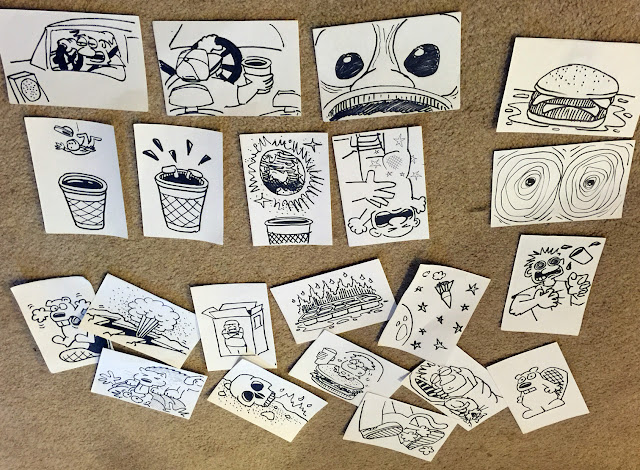 One interesting thing that I did on this gig was to completely eliminate the need for any digital technology, as in not bombarding the students with any slides whatsoever, including leaving off any of the accompanying lectures. That was a first, and it was based on an experience I had a couple years ago when walking into the first day of classes without knowing the computer and projector were unavailable for use. Which both terrified and pissed me off, but provided an excellent lesson in recalibrating my approach to teaching and in retrospect freed me from the tether of technology. All along my habitual visual cues had been metastasizing into a liability as opposed to an asset, and was in effect crippling my classroom – now it’s more about getting to goddamned work instead of so much over-emphasis on looking at and thinking about and talking about it. This is the way I teach Beginning Drawing… but in comparison my enthusiasm for the comics medium tends to get me so excited to share everything I know about it, all at once, it needed to have its chain jerked. 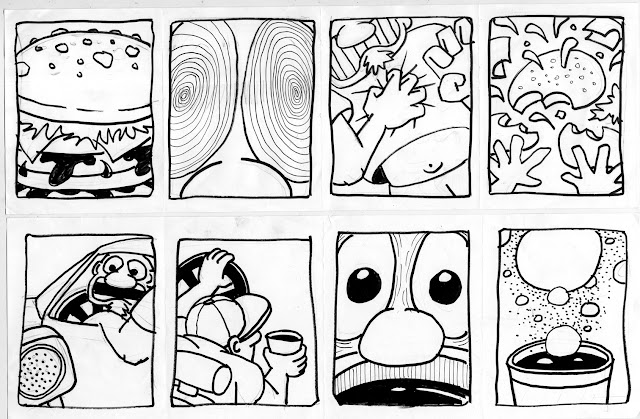 I employed a tried-and-true method of getting the wheels to start spinning with a few different approaches to cartoon jams. This isn excellent way to generate a large amount of raw material from which to, er, draw from, whether it be  single-panel gags, strips, or even the seeds of longer pieces. Personally it was humbling and illuminating to have such an opportunity to spend time making art with such an underserved and overlooked segment of the school district and our community. Also this residency provided me with the chance to connect with faculty and establish working relationships with staff who either recognized or were receptive to learning about the power of comics as a uniquely effective medium by which students can create their own works and tell their own story through sequential art - image and text/pictures and words.

As evidenced by the sample sequence above, one can derive immense satisfaction and get inspiration from the most mundane experiences. It's always interesting to compare and contrast how different people pay attention to details as it reflects their awareness, and as with much art, can be a window or a mirror of expression. As with many experiences with students and strangers alike, for me it always comes down to validated the many varied efforts in creating works of art. Making a strong personal connection and lasting impression on how creating comics is a rewarding activity and can even be a potential career. These kids were in a difficult place in their lives, and it was inspiring to hope this residency gave them another option for a healthy, alternative activities that will fulfill them and provide a positive outlet. Maybe I should start offering something like my own residencies or even internships. 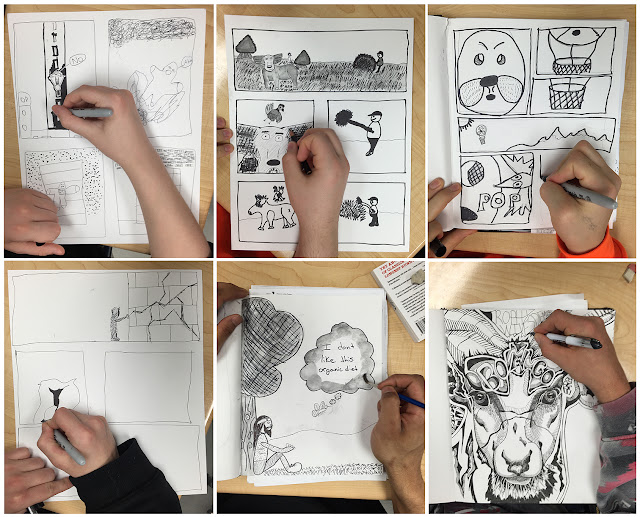 Viewers with a keen eye will note the one drawing above that's not like the others: several other staff members and instructors (some with amazing talents of their own) were present for classes and participated in exercises. Additional copies of the published group comic were distributed to other staff and faculty, and available in the in-house library, which was really cool to see how many comics were on the shelves. Longtime readers here will recognize how important and valuable a tool graphic novels are to fomenting literacy. While there was no specific workshops or in-services devoted to other teachers or the in-house community, an opportunity may avail itself after the holiday break to present a separate event in the form of a 45-minute long overview to any interested folks. 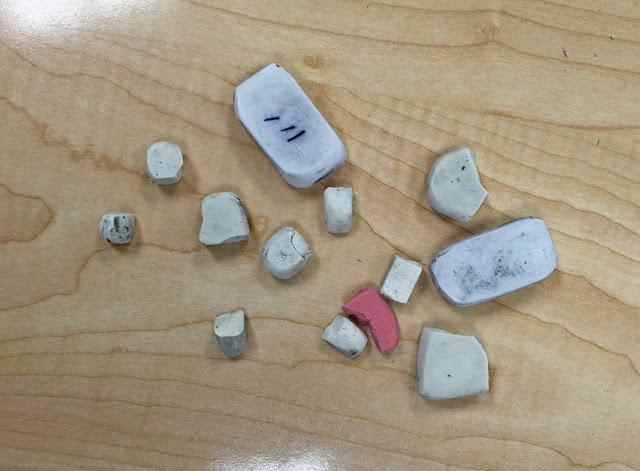 It's important to follow up on these residencies and show results, as it's not just an amusing distraction or luxury, it can be a potent message and way to literally illustrate the effect art can have on people. What better example than a fistful of nubs to demonstrate how we can erase the past and create new worlds and contribute in a better, more meaningful way. 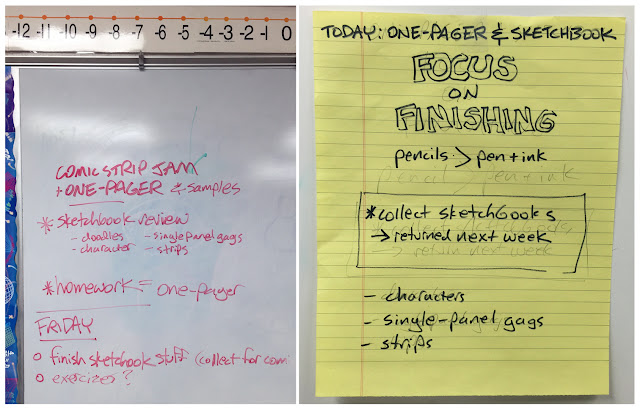 Time was spent divided between both halves of the student population (Treatment and Detention). When all was said & done I really wished there was another week to keep on drawing - never run out of things to do! Here's a sample schedule: 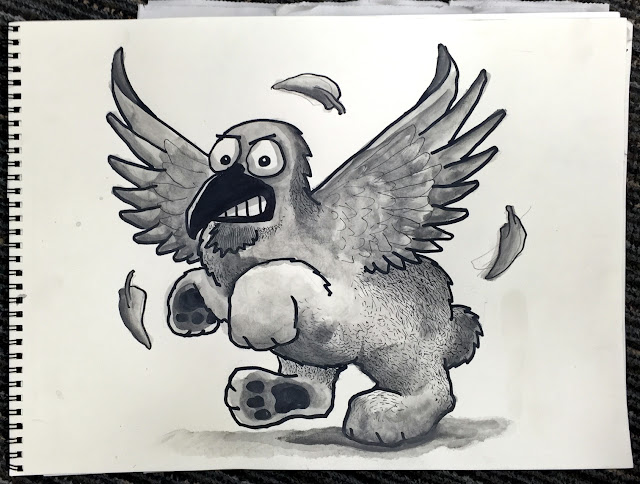 One idea (done as a successful intro to character development in a couple other residencies) was to have students come up with different ideas for their official school mascot. Turned out there already was one: the Golden Heart Gryphons, which I think i just simply awesome and way better than the usual wolf or lynx etc. As an aside I sketched up an Alaskan variation, which failed as far as historical accuracy: supposed to have the forelimbs of a bird also (the reworked correct version appeared in their comic book). Because I was finishing up both teaching a semester and a seasonal job plus a few other engagements on top of two shows, I was largely unable to attend to much of the details in planning this residency. So I'm extremely grateful for the time and effort of everyone involved: their professionalism, accommodation and support was invaluable and greatly appreciated. I rated the collaboration - specifically the coordination in planning + implementation as excellent, though all I had to do was show up. Funny how lots of things in life are like that. 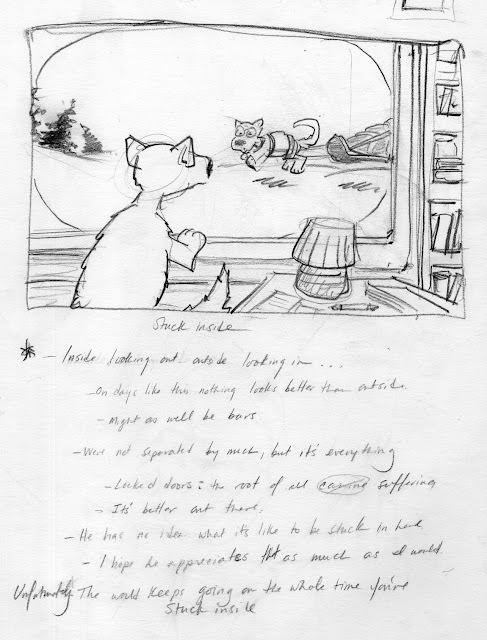 Lastly I did a Nuggets cartoon inspired by the whole experience, which the teacher who spearheaded bringing me into the facility, Nicole Stellon O'Donnell, did the caption text for. Left to my own devices I kept coming up with variants on "stuck inside," which didn't encompass the totality of the experience, from both perspectives. It was a good call, especially as she does a far better job with succinct turns of phrases given her wonderful and evocative writing.

The Fairbanks Daily News-Miner did a great little piece on the residency (link to article here), which resulted in getting some really good exposure to the educational program, along with an outstanding full-color 9" splash across the page of the panel. 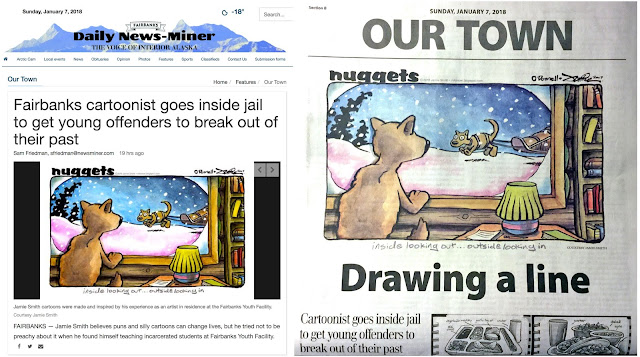