Following up on a previous post on the Cartoon & Comic Art course, thought I'd reply to a couple queries and credit a specific handful of the many resources that were culled from to construct the class. Of course, that got outta hand, and this link-heavy page is the result. These range from countless encounters and interactions with individual cartoonists working both in the field as creators and educators, as well as experiences in workshops where one has the opportunity to pick the brains of other artists. Institutions such as SCAD, MCAD, The Center For Cartoon Studies, SAW and others provide a great place to develop lasting professional relationships and gain insight on different techniques, and gain invaluable, personal perspectives on the many fascinating facets of the field.

Disclaimer: there is simply no end to the number of material out there, and so this is only an abbreviated - by no means definitive (see here for another excellent roster) - sampler from literally looking over my shoulder in the studio at the stuff on my own shelves. Some are out of print, but there always seems to be a new crop budding in the bookstores, which is a fabulous occurrence. Even from many overall duds there is usually - sometimes - an idea or two worth copying to add to the mix, at least for the accruing compost-heap that constitutes a defacto textbook.
Also this list is slightly skewed towards an emphasis on generating material for single-panel
ideas, and is most decidedly not appropriate for all ages - classroom usage requires prudent editing. Plus there is the list of resources linked on the right-hand side of the blog too. 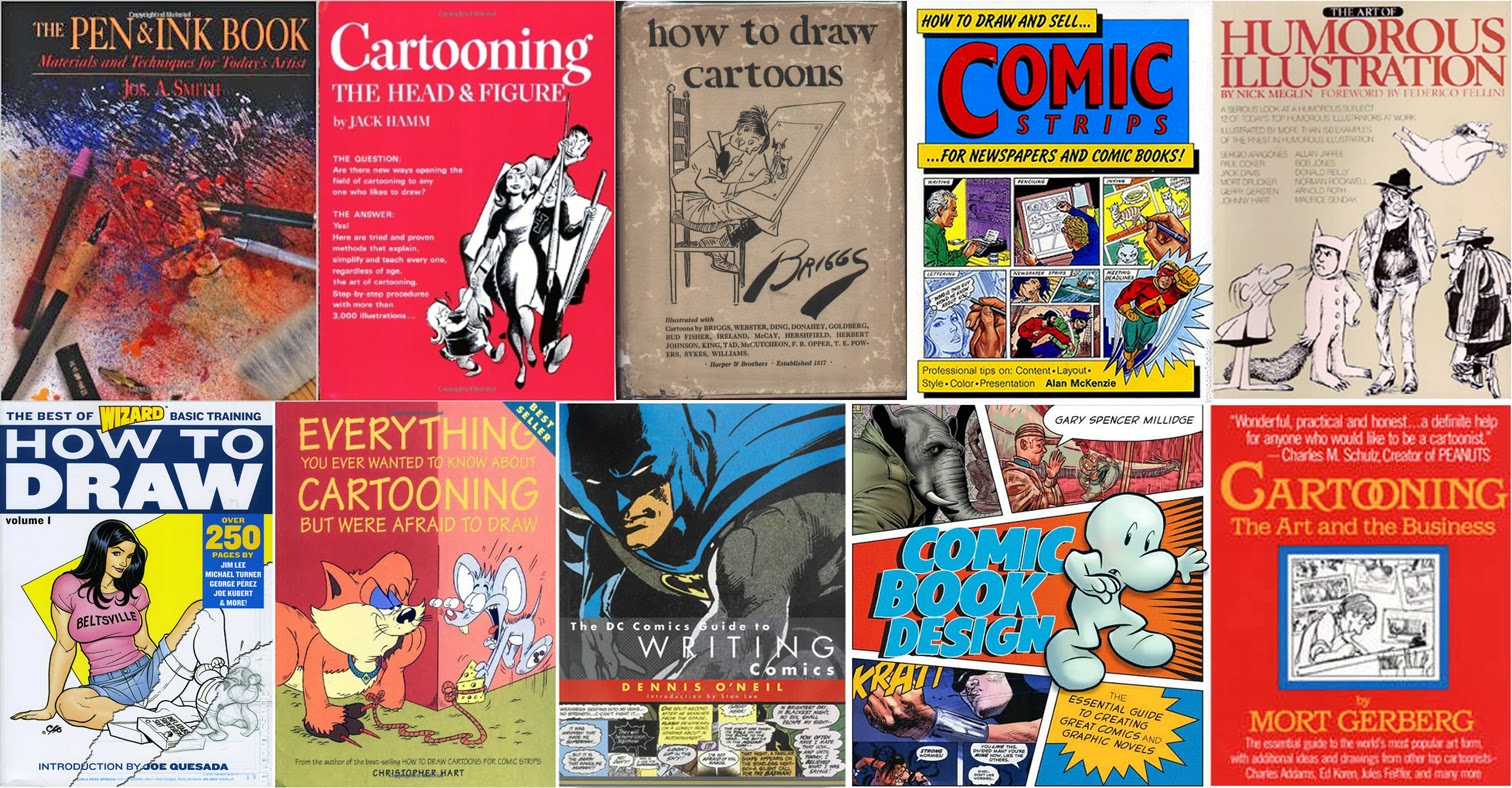 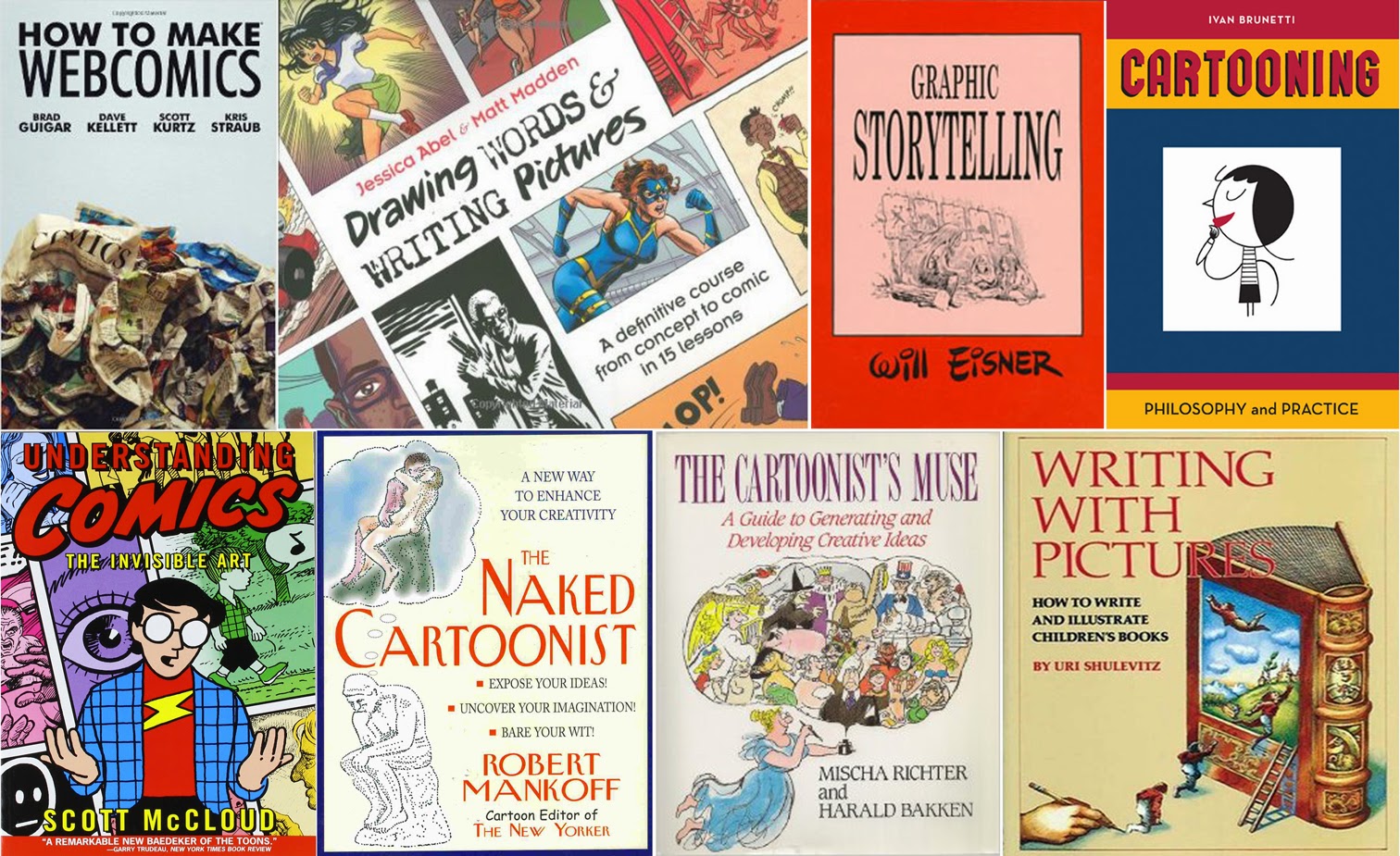 Anthologies: Flight, Titmouse, MOME, Popgun, The Best American Comics, Best Editorial Cartoons of the Year, Dark Horse Presents etc. These are my preferred method of showcasing the range of subject matter and diversity of style that are possible within the world of contemporary comics.

Graphic Novels: One could say this is a "desert island" list of sorts, though it would have to be a pretty good-sized island. But I try and take these titles with me to classes as examples, the number of which is dependent on the size of the bag, box or bin (and whether or not a parking spot close to the door can be had, or if I use my new little luggage-roller setup):

Along with industry honors such as the Eisner Award, Harvey and the Ignatz Awards, comics have been picking up increasing amounts of accolades from related fields like the Hugo, Locus, Bram Stoker, and World Fantasy Awards, even the Caldecott and Hans Christian Anderson Awards. Aside from self-publishers, some standout publishers of alternative/independent material include: Image Comics, Vertigo, Dark Horse, Top Shelf, Oni Press, Fantagraphics, Drawn and Quarterly and Last Gasp.
Educators: Aside from the Abel/Madden & McCloud books listed above, here are some specific resources geared more towards using comics in the classroom. James Sturm's "A Case For Comics" is an excellent summation (under "Promoting a Comics Curriculum" in The Center for Cartoon Studies' "Teaching Comics" page. And Gene Yang also has an excellent page "Comics in Education" devoted to promoting comics as a viable educational tool, above & beyond the basic potential for instilling a lifelong love of learning through reading. 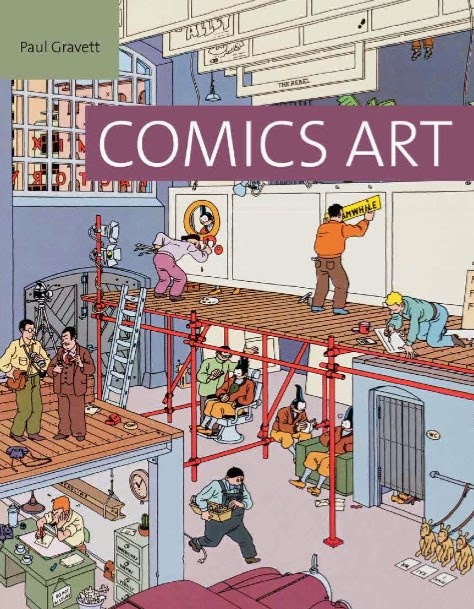 Probably the closest I've ever come to deviating from the longstanding compost-heap approach to generating a default "textbook" for the class has been a masterful overview recently published in Comics Art from Paul Gravett. At the very least it'll be required reading for the advanced students, as I haven't yet come across such an excellent survey that touches upon so many facets of the artform.


Comics Art is a new book by British comics expert, curator and historian, Paul Gravett, published on 7th November by Tate [Publishing, who describe it partly as:] “Richly illustrated with many images taken from original artwork and rare artifacts, Comics Art gives a fascinating, accessible guide to some of the special properties of sequential art, such as panels, page layouts, speech balloons and wordless or ‘silent’ narration. It addresses concerns about how comics perpetuate stereotypes and support the status quo, while assessing their growing significance, notably through autobiography and reportage, as vehicles for provocative voices often silenced in other media. Comics Art also explores the diversity of styles, media and approaches now possible in the medium and exciting developments in digital comics and in comics conceived for galleries and installations.” – Rich Johnson, Bleeding Cool 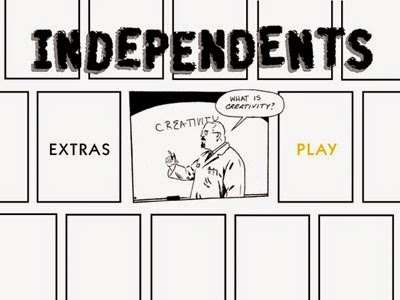 Back in 2009 I briefly mentioned in a post about the only DVD I routinely play for classes: "Independents: A Guide to the Creative Spirit" by director Chris Brand. It's still a must-see in my book, especially for the aspiring comic artist, though any art student would benefit from the commentary and insight from the wide range of creators.
Update: "Stripped" is a 2014 documentary (official website here) that is ostensibly deals with the implosion of the syndication model and print industry, but it's my current #1 film to watch for some really inspiring interviews with the pantheon of industry greats.

An important supplement to the daily exercises and weekly critiqued assignments within the studio is constant exposure to websites, YouTube videos and podcasts of creators and their respective works (many of which are posted on the blogroll to the right). And of course the time-honored, traditional methods of studying and deconstructing the works of the masters, historical and contemporary, and most importantly, the time and space to practice.

But in the end, one of the best selling points about comics is you really don't need much at all (re: degrees, classes, textbooks, training) of anything else other than some paper and a pencil, some pens, and eraser. And a library card. And maybe a photocopier, and/or scanner + computer. Camaraderie with other cartoonists can be crucial. And... and... etc. 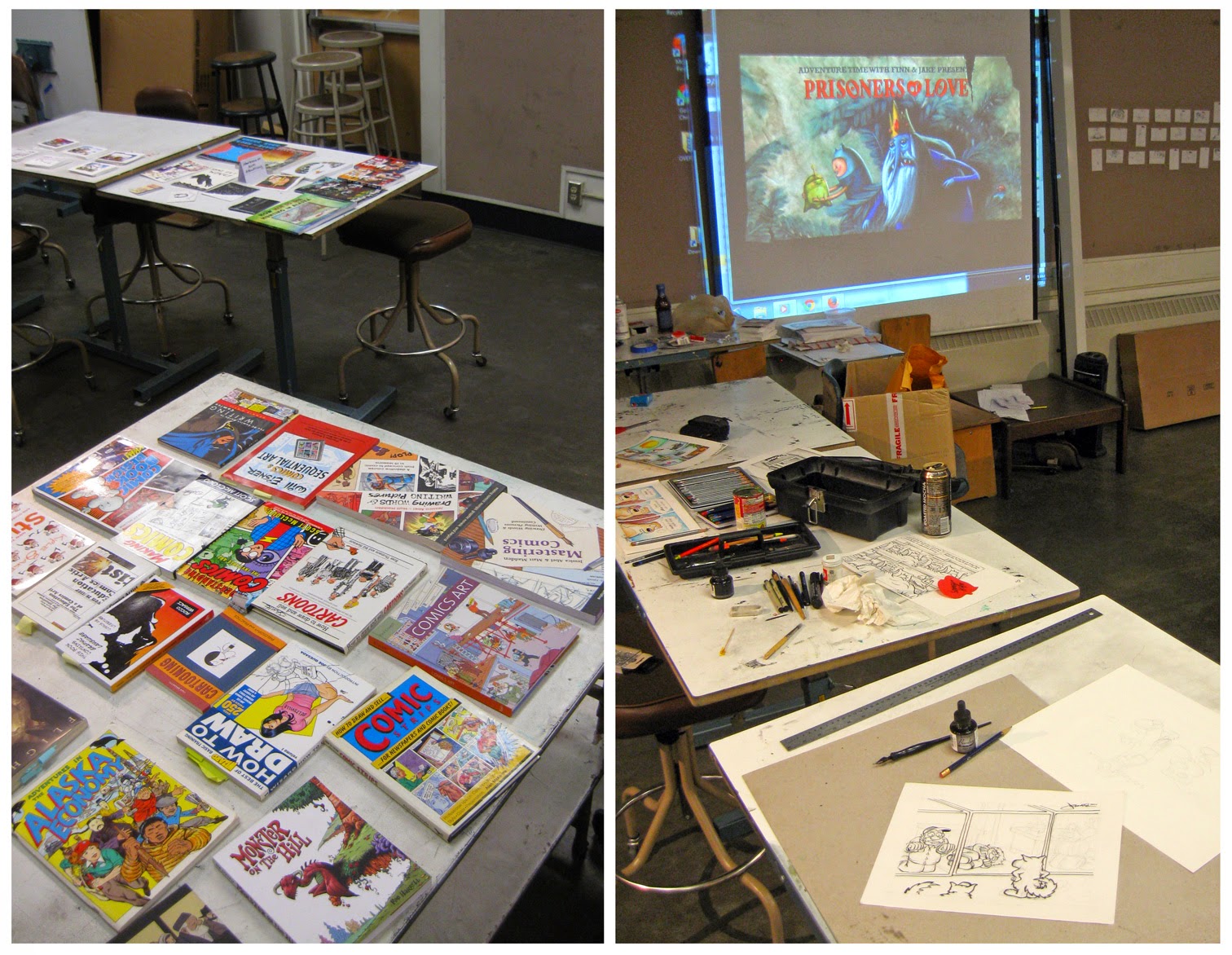