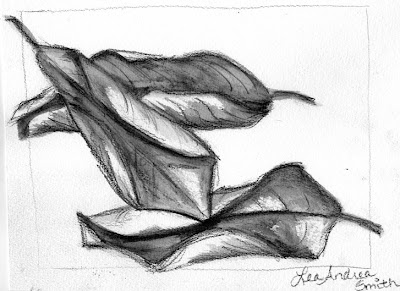 Shown here on this posting are a couple in-class exercises experimenting with wash (overlaying a re-emphasis on both arrangement of compositional elements plus contour line), and a selection of some of the outstanding critique pieces. Some truly exceptional efforts, and a wide range of views from around the campus and community - literally windows into other people's lives, which is one of the meta-points to the whole assignment, a sense of place. That and a damn good charcoal drawing.

I oscillate between giving students the reign (free-range creativity) versus micro-managing. On the one hand some folks need much more support and hands-on guidance, others resist if not outright resent any efforts to influence or control their work. In my own artistic life, I have a foot in each world: freelance and the personal, plus considerable overlap in between the two realms of expression. There's always loopholes in every assignment that can accommodate both the student who needs concise, specific parameters, and the student who needs an outlet to wander off the beaten path, exploring their own interpretations. 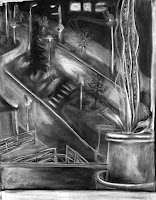 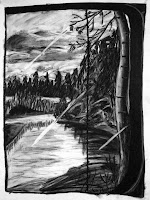 There's a former student of mine that I bumped into last week in the art department halls. She said "I hate art." After blowing it off with bittersweet empathy and cynicism, many hours later it still chafed away in my thoughts. Given that this was from an extraordinarily accomplished art major (and a conscientious student), statements like that might give one pause to reconsider, and reflect; what the hell is the point again? What are you doing? Turns out it was just a cyclic stressing over critiques for multiple studio art classes piling up on top of each other. That's a lot of work to be juggling at one time, and is also one of the reasons behind every so often getting a wee bit of a reinvigorated work ethic myself just seeing what an art student goes through all the time. Like picking up contact creativity, it'll rub off on ya. 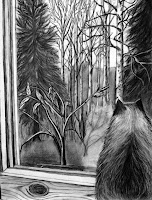 There are the rare days when I feel like hiding from the world, and would really rather stay in the cabin hunched over a new sheet of Bristol board, lost in ink. There are times I hide in the office, a quiet re-coiling after making copies, setting up the demonstration materials, assembling the still life, reviewing the syllabus and schedule, prepping lecture notes, so on and so forth. Sometimes the speed bump of an offhand comment like from that former student opens a brief window where all the assumptions that are suppose to keep the autopilot humming along suddenly stall out, quit working.
Being both a working artist and also a teacher is a weird duality that means understanding the particular demands inherent in producing a piece of art, and maintaining the expectations that others will overcome them as well. Project much? 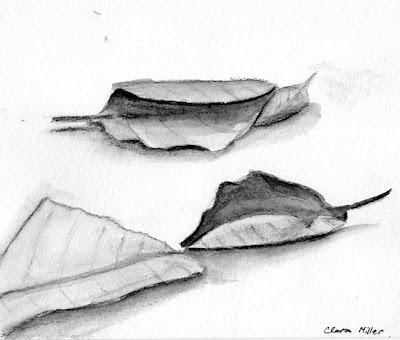 At times I will forget to take into account the fundamentally reflexive and long-accustomed habit of ignoring how I feel, and regardless of my motivation or mood, just do the damn job. That bare-knuckle approach works well whether it's tackling a new topic in some panel or design, or putting on a game face and summoning the fortitude to wade into yet another critique. This is basic, a given that comes with the territory, and with experience becomes second nature, one that I need to remember myself and to remind in others.
Fortunately making and looking at art never gets old, even during those times that I've temporarily forgotten the fact I love doing both. Doing and teaching art share the same potential for pleasure (aside from the constant, inevitable disappointments), both will always lure me into putting everything else aside for the moment - a moment which can stretch out for hours - and focus on the task at hand. There's always going to be something else to do, something that should get done first instead. That's a constant, it never ends, and more often than not the dividing line of success: perseverance in prioritizing. You get, or have to take, the time for creativity, to wonder at creation - something a lot of folks either never get to experience for themselves much less see or take the time to appreciate.

Don't think I've mentioned yet that for every assignment and critique there's an accompanying handout with specific details on what's expected for each piece done in this Beginning Drawing class. Also included is a showcased piece from a previous student, and there's an short show & tell of selected examples from other classes, which after viewing preparatory thumbnails in sketchbooks I'll quite often keep some students after class to go over with for those that might not be getting exactly what we're after. There's some debate amongst art teachers as to whether or not this technique is effective - in some cases it could either preempt a student's own creative interpretation or even fill them with helplessness in light of how good other student's work looks (though I do show a full spread from good to bad to ugly so we can compare + contrast what's working & why, or why not). Neither has really happened in my experience, it's good to both set the bar high and to clearly lay out the parameters. Works for me, and them.