"I hear and I forget. I see and I remember. I do and I understand." - Chinese proverb

Today's in-class exercise was stepped-down in expectations, meaning I eased back on production; all the students had to do was one completed drawing. Trick was, the drawing should in theory coagulate everything they've been taught up to this point in the semester. So to some degree somewhere there should be elements that incorporate and reflect basic concepts already covered.
But as an added bonus, the subject matter introduced reflective surfaces and transparency, which even on an abstracted, micro scale the challenge of a deceptively simple object can be either an amazing exploration of form and value, or an utterly defeating, nightmarish task. More than a few students expressed intense displeasure and frustration with their efforts; more than a few "I hate this," "I hate charcoal" comments, and one even telling me they were going to cry. Hell, maybe I should try that next class. 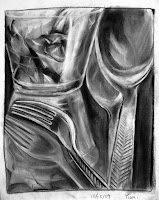 Scavenging throughout the department an hour before class I was able to assemble an "Art Buffet" - (i.e. no food) just clear plastic utensils + cups, tinfoil + mirror. The complexity of the setup was customized according to whether student was a "Beginning Beginner" versus an "Advanced Beginner," in other words the intricacy of detail in each composition could be scaled up or down given the relative abilities of each person. I like an intimate, personal still-life, though usually over the course of the semester several large-scale setups will be on display for weeks at a time in the drawing studio for the more advanced classes, which can be advantageous to piggy-back onto. Also the magic viewfinder was resurrected as a tool by which to help isolate a selection and cropping device. As per previous in-class exercises, they established first a neutral tone for the background from which to gradually push + pull areas of depth, eventually refining the forms through subtractive technique and maybe using white Conté for highlights. As you can see from the posted samples, there were some outstanding studies, and hopefully all the past couple weeks of related exercises will culminate in equally good works done for Thursday's critique.

On a logistical note: every semester has it's surprises, and it had been years since I was brought up short by my own schedule, in that last week I discovered a dead zone where there was nothing specific planned for the day (today). This could be in part because I've been unconsciously on the same trajectory as the intense summer session regiment and thus piling way too much on, plus sometimes extra days are mysteriously added to the semester's calendar. The momentary panic with "what am I gonna do?" is always good for kick-starting spontaneous creative ideas for both artists and art teachers, and as there's always a list of stuff I regret "never getting around to" with each class, there's no shortage of random backup/more in-depth auxiliary exercises to draw from.

"Everywhere I go I'm asked if I think the university stifles writers. My opinion is that they don't stifle enough of them. There's many a best-seller that could have been prevented by a good teacher." - Flannery O'Connor

Today's class also involved admonishing a slacker that if they aren't going to be actually drawing then they might as well go home. As in "why don't you?" - "no, really, just leave" - which translates into a casual, friendly, roundabout way to make the point you are now officially through wasting our time & attention, and the next stage will be outright dismissal. About this time in every semester the dead weight becomes a drag, a drain on me and everybody else in the class, and it's basically a pointless exercise in very expensive babysitting. In other words, the feeling's mutual - if they don't want to be there, then quite simply I don't want them there either. Normally it would be professional to not spell out such ultimatums in public/in front of other students, yet there's something to said for setting an example. Some people raise the bar, others lower it... I sometimes forget the fact that I'm the damn bar.

"The teacher should make a concerted effort never to lose his temper in the presence of the class. If a man, he may take refuge in profane soliloquies. If a woman, she may follow the example of one sweet-faced tranquil girl who went out in the yard and gnawed a post." - William Lyon Phelps

Topping things off was a fantastic thumbnail done for our upcoming critique done while driving, which, while definitely a challenge, is most definitely not encouraged. 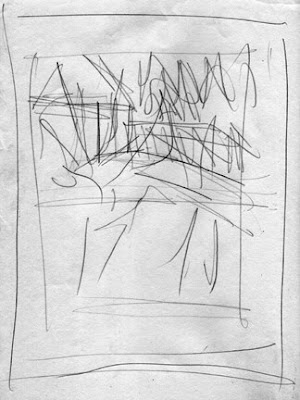