"Getting out of bed in the morning is an act of false confidence." - Jules Feiffer 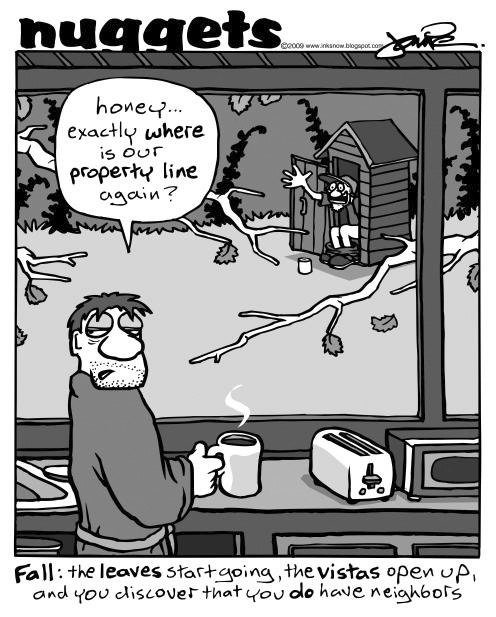 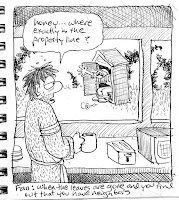 Roll off the couch, displacing disgruntled cats and groggy dog, do a little pee-dance while prepping Mr. Coffee (about the extent of my planning for the immediate future), then shuffle out the door and up the hill to the outhouse. Transcendentalist leanings aside, this ritual ranks more of a white-trash Walden experience than just simply heeding Nature's call.
Tabula rasa: skim over some reading material (any one of various dictionaries, reference books and cartoon anthologies currently shelved in the rack), and eventually assume the vacant stare as the infinite and random associations begin to play out in my fresh, empty head. I used to have an old folk toy as a kid, a Jacob's Ladder, and my thinking process is similar to that; an initial idea is turned over and over, clunking down a string of attached concepts and then begun anew, constantly shuffled and remixed into ever-expanding and frequently less rational and unpredictable non-sequiturs. 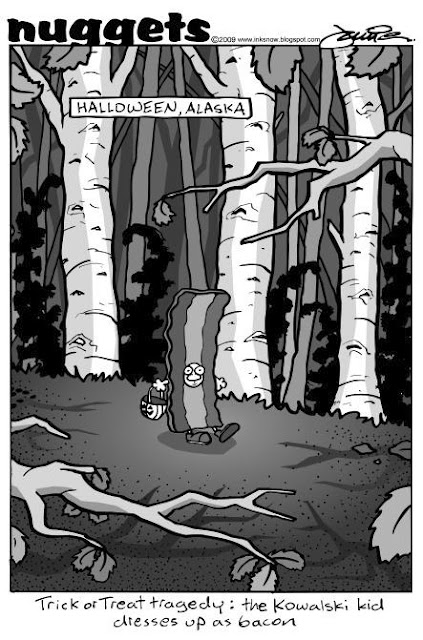 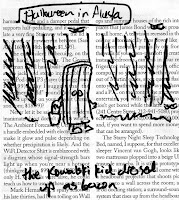 That'd be why there's a pile of scratch-paper and Sharpies (at least until the temperature gets sub-zero, then its pencils) to annotate any doodles that are sluiced out of the mental tailings of the morning.
Daily exposure to the seasonal environments obviously informs and inspires to some degree: Camp Robbers and ravens provide an entertaining soundtrack as birch leaves cascade down around me and the sweet-rot scent of fall permeates everything. Thoughts of hunting and Halloween are prompted by a moose calf with two yearlings wandering around the cabin. Yesterday, a young bull came through with its rack tangled up in rope, dragging more than twenty feet behind it, and I was halfway towards it think about grabbing the loose end and tying it to tree so as to figure out how to cut it off, when I had a vision of the girlfriend coming home after work and finding my flattened corpse out in the yard. That or being dragged through the neighborhood, which probably wouldn't raise too many eyebrows with my reputation. See, these ideas just come to me; you sometimes just have to sit and wait for 'em. 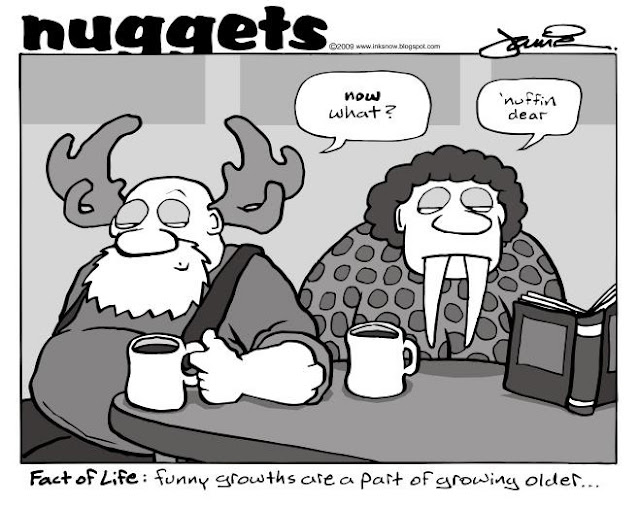 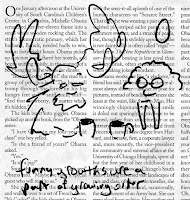 Back inside the coffee's burping away, as hot & ready as my itchy fingers. I tip-toe over to the computer and drawing table trying not to rouse grumpy-bear from bed this early on a weekend morning. When that's a moot point everybody in the neighborhood is woken up with Wagner and the creative juices really start to flow. I love whipping up and riding the vortex: simultaneously reading a little here & there, jotting down notes, some sketching, penciling, inking, scanning, finishing, uploading, posting, writing, emailing: the evolving dance of art for me is more like being at a multiday-long music festival; punctuated equilibrium in action, never know quite what will happen or how, hey, just go with it man. And no, for those of our viewers keeping score at home; nope, no projection at all here, it's a metaphor: nomatter how many folks assume otherwise, it's never a good idea to draw the girlfriend in a cartoon. Especially as a walrus. 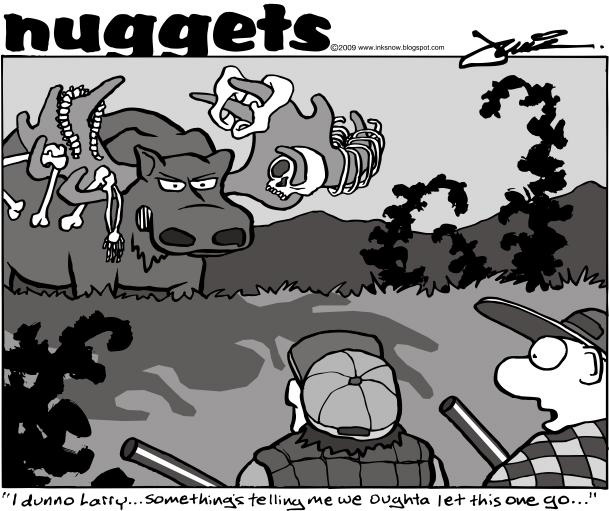 So posted here for edification today are some raw scans of doodles, and some slightly more refined preliminary sketches before reworking and editing into a final piece for publishing. Some undergo major compositional changes, others are pretty much as they sprang out of consciousness onto the page. Note the original sketch was to include the whole skeleton of another bull moose, then that got edited to just a skull, which then in turn morphed into a human skeleton instead (requiring breaking out the old anatomy books for reference), revealing something psychological I'm sure. Some will never see print or the light of day (save here - see next post); some are funnier than others, a couple are obtuse to the point of obscurity, but it's all good. Timing is a factor as well: the outhouse gag is actually from last year, but I missed the seasonal window of opportunity within which to have it be relevant (some cartoons need as much help as possible), and the Halloween one is a fine example of me for once having my shit together far enough in advance of a holiday to be ready for it.

Those couple took a bit more time + attention than usual; taking it as far as I can go or at the least pushing the envelope as far as my artistic comfort zone with the drawing end can be frustrating. Keeping in mind the mantra "a good joke will sell a bad drawing" I'm aware that this isn't creative compensation in trying to shore up a dumb joke - they all are, so that's never an issue - I'll instead try and see if the scenario I envision can actually be executed. Or at least have it make sense to someone other than me, which more often than not is the rub. After an hour or so of struggling to ink in a fairly detailed composition (for a simple cartoon) one begins to fight the nagging question of what's the point, and worse, only to have it fail right before your eyes after not pulling off whatever scenario you hoped for. Maybe it can be successfully resurrected using digital means, which'll take another hour invested in what still might eventually turn out to be hopeless and futile, but hey, this isn't necessarily a deliberate, outcome-oriented process anyways. And this medium isn't exactly one known for painstaking attention to details, so there is a definite point of diminishing returns where one mentally throws up the hands and says it's good enough, time to move on. I mean, one of the enduring bits of advice I've heard: don't sweat the petty stuff.

"If you want to make an apple pie from scratch, you must first create the universe." - Carl Sagan