Disclaimer: this is what happens when you rely on impressions from memory and don't actually do any dammed reference. That'd be the reason why A) Smokey is wearing boots, and B) is being all gangsta with the baggy pants. See, I couldn't remember if his tail is hanging over, or if there's maybe a little hole cut for it to poke out, or is it just kept shoved down the back of his jeans. That has got to be a bit uncomfortable. Looking on-line afterwards, I noticed you never see any pictures of Smokey from the back anyways - what's up with that? And why the hell is he wearing pants anyways? So why not boots too? Boxers of briefs?

The one thing I did research with painstaking care and attention to detail was on the ranger hat. Visible on the table during the still shot of the studio area you can see some of the sketches I did of a borrowed prop from Park Headquarters. Trivia: the official Stetsons worn by rangers are known as "campaign hats" and were originally fashioned from beaver fur before the modern felt version (see also: the "Montana peak" hat crease worn by the Buffalo Soldiers). 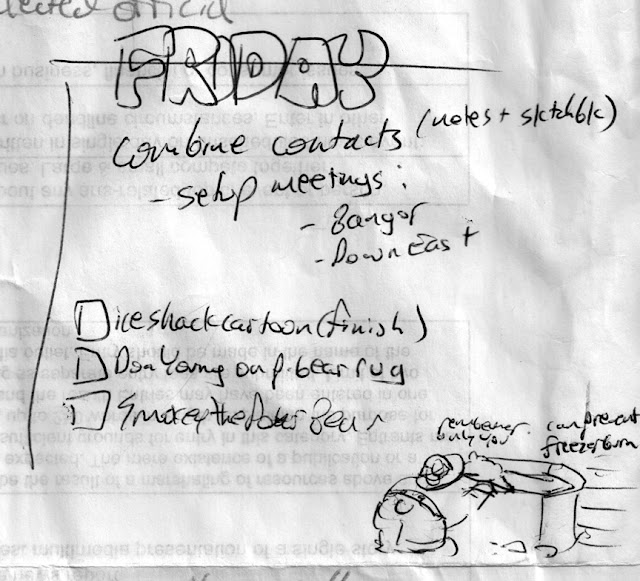 The Demo Reel was produced entirely with iMovie on the new iMac, and aside from the scanned in (or Photoshopped) stills, all the video portion was recorded using a Canon Power Shot camera mounted a tripod setup next to the drawing board. Aside from opening the program last week and farting around for a bit before giving up, this was all a one-shot session from start to finish with no training whatsoever. It took about twelve straight hours of obsessive tunnel vision, from drawing and simultaneously filming each successive stage (five eight-minute sessions of video), importing the AVI files, adding stills and soundtrack, and some editorial tweaking. 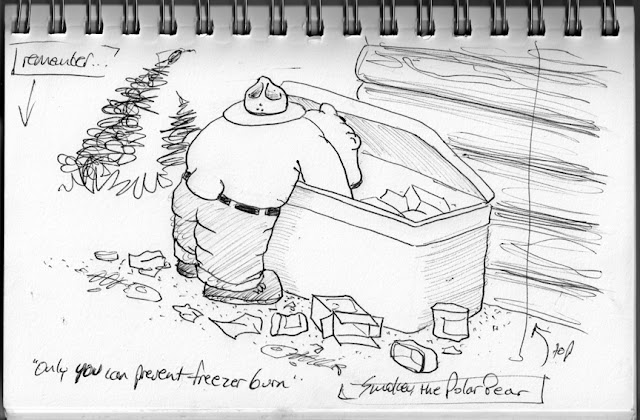 Sure... it could stand some improvement, but I'm pretty pleased with what it wound up looking like. Much like so many cartoons, I get impatient and want instant results, so before too long I just call it good and move on. Now I really have no excuse to start dabbling with some more animation and other miscellaneous video projects that have been simmering away on the back burner. My favorite part is the logo splash at the very end, that and the fantasy that drawing one of these panels could actually take only six minutes. The speeding up was a compromise between the inherently boring action and the geeky fascination I personally have with watching people draw. Besides, even jacked up on serious coffee I could never bang out a cartoon in less than an hour, and there's no image stabilization software that could possibly compensate for that degree of shaking. 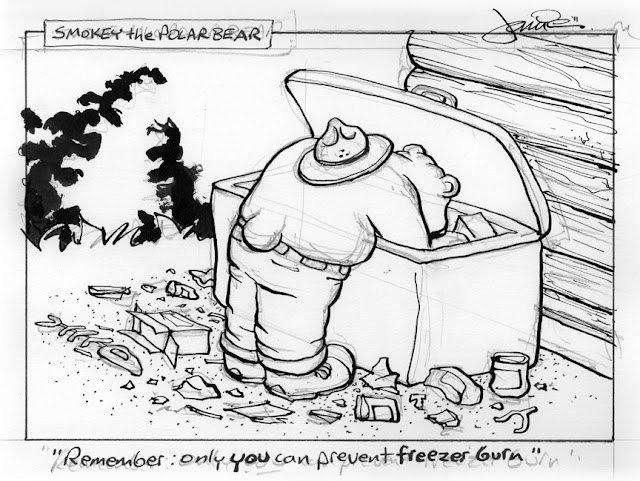 Some obvious faults: timing and pacing are a bit off here and there, as I hadn't yet mastered the transition fine-tuning options that are available; bad lighting (somewhat offset by goofing around with effect settings like black & white etc.); also I completely forgot to stop and scan the pencils; and oh yeah, the whole damn thing is upside down - next time I'll maybe remember to flip all the footage. 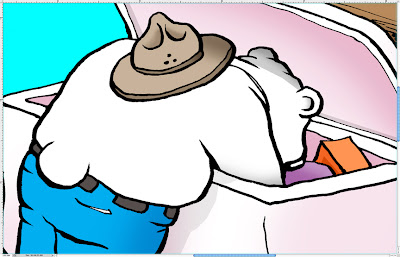 Lastly the music: originally I had for the opening sequence an excerpt from a favorite film/soundtrack - "Work" by Clint Mansell from "The Fountain" - and the fast-forward score was gonna be some drum solo action from Neil Peart (setting the standard here). Licensing and copyrights being what they are, I opted instead to use some material dug up on iTunes, which in the end turned out probably better anyways. Even if it does seem like it's influenced by both "Crumb" and the documentary scenes of the philosopher Professor Louis Levi in Woody Allen's "Crimes and Misdemeanors."

After a three-hour upload in HD format to YouTube (I definitely don't miss the 24k dial-up at the old cabin), their "Content ID System" erroneously detected and immediately flagged it as possibly infringing, containing "content that is owned or administered" by an entity known as "Music Publishing Rights Collecting Society." Based on what followup I was able to dig through, it seems YouTube automatically filters the over 100 years-worth of video uploaded every day, and anything remotely resembling copyrighted content will trigger an alert. Seeing as how both pieces were purchased as royalty free/public domain works, in this case it merits the formal dispute process - enjoy it while it lasts!