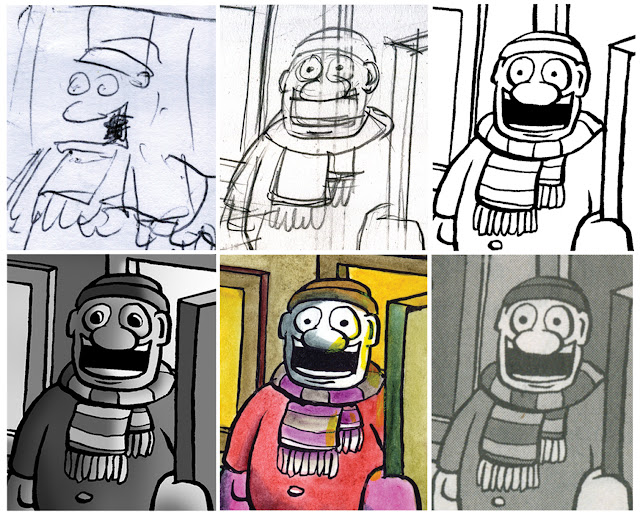 Saved the best for last... one final post before turning the page on 2018.

Scroll down memory lane: The original premise behind this blog was to ostensibly document the behind-the-scenes process of teaching a beginning drawing class. Then over the ensuing years that mission statement has evolved mutated more into a cartooning platform, not that that's necessarily a bad thing in itself. But I'm still seeking to pull back the curtain a bit and focus on some of the little details that all add up to producing a panel. My hope is still that all these snapshots, taken from many varying perspectives, ultimately makes for a sort of patchwork tapestry of content, all knit together like a Frankenstein made in some crazy arts + crafts lab. 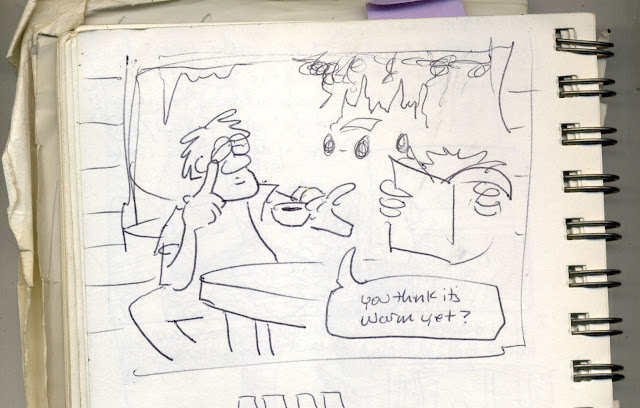 Exploring the video aspect has meant a few entertaining forays into a different medium: "Google Maps" (2016), "Cabin Fever" (2015), "Ruminate" (2014),  and the very first attempt, "Smokey the Polar Bear" (from 2011). Lastly was the penultimate collaboration with banjoist Seth Danielson "Noosance Moosance." They're obviously - painfully so in places - all amateur efforts, entirely homemade with iPhone, iPad, iMac and iMovie. Lots of problems in retrospect, but as with the cartoons themselves, over time they get easier to do, if not clearer to understand.

Now here's what I think is a perfect capstone, as it really emphasizes the foundation of so much when it comes to basic drawing: namely structuring a composition, and utilizing linear perspective to those ends. 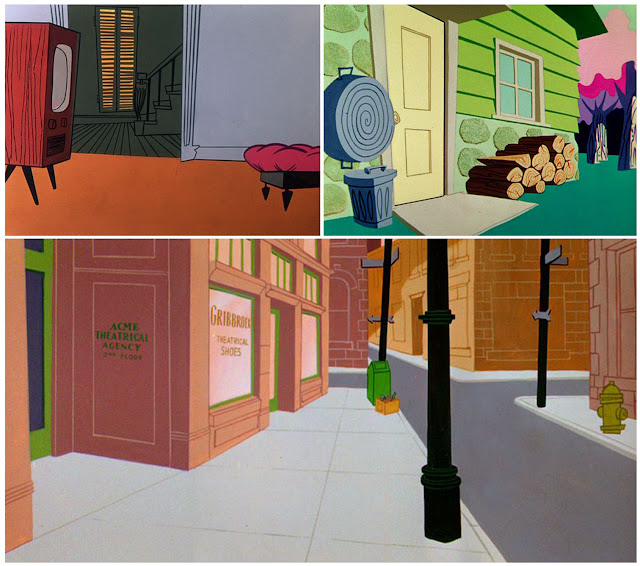 The bulk of this project happened over the same extended holiday weekend as did a background binge-watch of one hundred and eighty episodes of Looney Tunes, all from three Golden Collection DVD boxed sets. To quote Daffy from the classic 1953 Merrie Melodies “Duck Amuck,” emerging from the cabin and re-entering society afterwards made for a curious effect: "That's strange. All of a sudden I don't quite feel like myself. Oh, I feel all right, and yet I... I uh..."

But while working on this very process demo video I was focusing in particular on the methodical approach I have to creating settings for many of my panels: lots of overlapping layers using linear perspective to “set the stage” for characters + props. Simultaneous to this I kept getting drawn into so many of the designs created for Looney Tunes (Paul Julian, Maurice Nobel etc.) – such gorgeous scenes that often go overlooked. It really made for a big “a-HA” moment connecting the dots in a direct line of influence to my own work… that and MAD’s Don Martin + the sense of humor from Jim Henson’s Muppets (speaking of nostalgia I also often binge on every single season of the Muppet Show) completes my personal trinity of aesthetics. 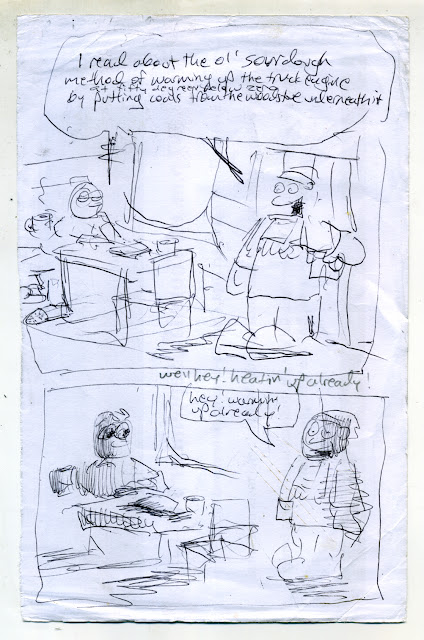 Another aspect I didn't touch on in the video was how/why I didn’t just simply copy + paste the first panel instead of laboriously redrawing it all for the second panel. Hell if shortcuts to save time was of any importance to me then I’m in the wrong business to begin with. Hence my amusement at the logic behind folks using custom-made fonts of their own handwriting, or best of all, this humblebrag effort bemoaning how much more efficient the artist would have been with hindsight. Give me a goddamn break: as an artist you already surrendered the high ground when it comes to wasting your time (and entire life). That's a cynical extreme, but the point remains - abandoning the craft in the name of speed leads to fast-food, art that is high on eye-candy & caloric content, but deficient in essential nutrients, so you wind up aesthetically starving. 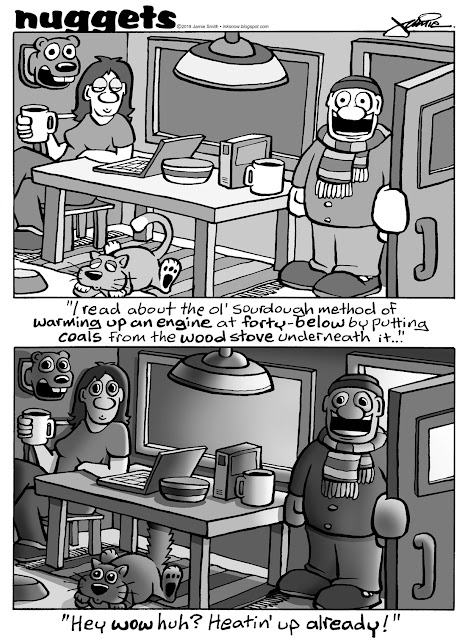 I really wonder at how many folks actually missed out on the overall intent here: in retrospect I suspect that I ought to have rendered everything even more, ah, well... cartoonish, and really exaggerated the explosion. Like with added chunks of flying debris and maybe even sound effects. But then that would have run contrary to my usual deadpan approach, even if playing it underhanded for comedic value runs the risk of going unnoticed, especially in contemporary society's constant overkill on sensory overload. After daily, even hourly viewing of an unending deluge of streaming information that punches us repeatedly in the eyeballs and slaps us upside the brain for entertainment, something that just statically sits on the page just can't compete with the demands of today's attention-deficit-driven consumer market. 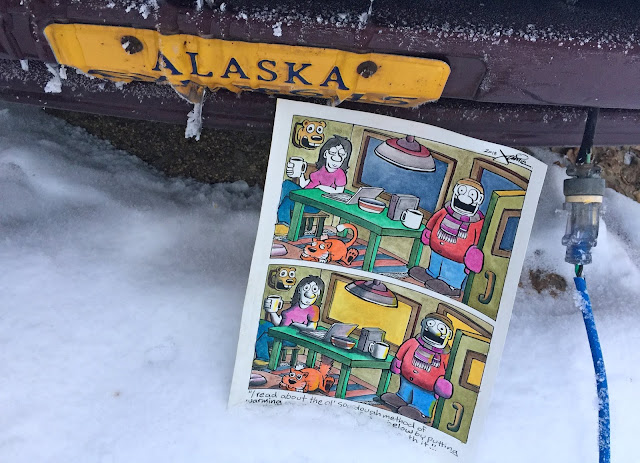 One of the new features I added to this demo reel was including subtitles, so as to provide something in the way of closed captioning. This was first done by typing in directly off the working script, then modifying it in accordance with the segments the words were tagged to appear in synch with on the screen. That took some toggling back & forth, but it helped juggling the overall timing + pacing.

Then I just simply read off the subtitles to get the narration, and lastly plugged in another perfect background piece performed by Poddington Bear, my go-to composer on Free Music Archive.


Actually this endeavor triggered a cascade of other miscellaneous crap: Firefox was all buggy and not even loading the upload page for YouTube – a common problem on many sites with a slow internet connection (dialup speed) that we have out here at the cabin on the hill. Note: Even uploading the mp4 took almost three hours!

So I did clean reinstall, which took a while, and wound up not being the problem anyways. So switched over to Safari, which meant finding and looking up all the account log-in info that is autofilled in Firefox. This solution looked good to go, but by then the editorial feedback I got on the beta version meant wrestling - then ultimately scrapping - any idea of text. Bummer but also kinda good riddance as it was a pain in the ass – but now after deleting everything it was back to shifting all the segments into lengths in time with the voice-over alone. Which in turn meant finding where the iMac microphone was, so as to redo the recording a bit more louder turns out REALLY REALLY LOUD and easier to understand. All in all a vast improvement on the first take.

Enjoy... and the transcript is below the fold

Hi my name’s Jamie Smith, and for thirty years now
I’ve drawn a cartoon called “Nuggets” for a newspaper way up here
in the Interior of Alaska where I live & work & teach

Here’s a breakdown of some of the steps that went into creating
one of my recent weekly panels, titled “Is the car warmed up yet?”

Here is what’s called a thumbnail sketch: It’s where the composition is worked out
(I like to make all my mistakes here, in advance, before moving on to the finished piece)

Now for the pencil stage:
Here’s where I plot out all the lines, methodically layering and arranging elements
First I block out the biggest areas and objects, sketching general shapes out very lightly
working from the largest areas to the smallest, saving the details until the very end

I use linear perspective to create the illusion of depth:
a 3-dimensional space on a flat sheet of paper

It’s just like building a stage for putting on a play:
First you construct the set, as a place to put the props
and arrange the actors to create your scene

When it’s all roughed in & ready I will ink it up using my old-school dip-pens
on smooth Bristol board, using waterproof black India ink

When everything is dry, erase any pencil lines
then scan into a computer for cleanup and conversion
and adding any lettering

Finally it’s time to shade it in by digitally adding the halftones
This is where I use value as a way to add volume
it turns shapes into forms, with directional light sources
and use of increased contrast and smooth gradations
This enhances & defines the drawing, unifying the overall composition.

Now since this was a two-panel piece, it took about twice as long to complete
Maybe an hour to doodle + pencil …another to ink & scan…
… then one more to clean up, edit & shade
Afterwards I go back and add watercolor to the original artwork

Lastly, here’s what it looks like as appearing in print
for the Sunday edition of the Fairbanks Daily News-Miner

thanks for watching - please visit my blog
to read even more details on the process
and some behind-the-scenes secrets of this + other projects
Most of all… Have fun making your own cartoons
at 6:00 AM