Here's a grab-bag medley of images from the veritable buffet of in-class exercises in this year's Cartoon & Comic Arts course (the eighth season offered through UAF Summer Sessions).
(more after the jump)


One of the crucial accouterments of the trade is an accumulation of material from which - often literally - to draw from for inspiration. These take the form of visual + verbal prompts: randomized imagery juxtaposed against non-sequitorial text, and follow from series of cartoon jams with deaf-gag panels.


Hence the succession of assignments serve to not only get the creative juices flowing but also generate the mental mulch-pile... that compost heap of concepts used to continually fertilize the funnies. And there are also physical leftovers which gradually start to pile up on a desk in the corner of the studio, and so the old excuse "I don't have any ideas" doesn't carry any water whatsoever when there is a bottomless well to draw from, within & without.


Tightly timed in such a fashion so as to reflexively bypass the baloney (aka the dreaded inner committee comprised of an editor and critic which more often than not hampers the process), I now start the entire six-week session off with the 60-second "Think Before You Ink" exercise which from that point on everything follows in a similar form - reducing the concepts down to their simplest expression. In comparison to this initial piece, having two or three whole minutes to work up a sketch in any other exercise is a relative luxury.


As with everything editing, timing and pacing come into play when the narrative structure begins to incorporate the passage of time. For example, the class is divided into two different groups, each illustrate a simple sequence (using Sharpie + five index cards per student) by subdividing the story segments up amongst themselves. They then post as a group their different versions on the review wall, and then add in an additional five panels each at chosen points on the other group's unfolding story, expanding upon the overall structure through beats and expositions. We then compare & contrast the relative effectiveness and aesthetics behind these choices. Finally they are asked to reduce the narrative down in each of the two overall sequences to the bare minimum number of panels yet still manage retain the original story.

Playing with points of view from another perspective: changing angles, changing minds, changing worlds. Here's a remix of panels culled from everybody's storyboarded sequence that tasked them with changing the context of the iconic Charlie Brown football scene to that of a classic Western genre instead.


Intermittent reminders of the basics come back into play with quick, timed exercises such as sketching out sequences of scenarios... like waking up late for school, rushing out the door only to discover that it's Sunday. How to best illustrate concepts through simple imagery alone, what marks to make and in what order... these are often instinctual and at their most effective when flowing unfiltered from the end of a pen to paper without any editing whatsoever. Raw, reflexive cartooning is expression in its purest form - like ink itself, black or white, on or off: into the mind and onto the page. 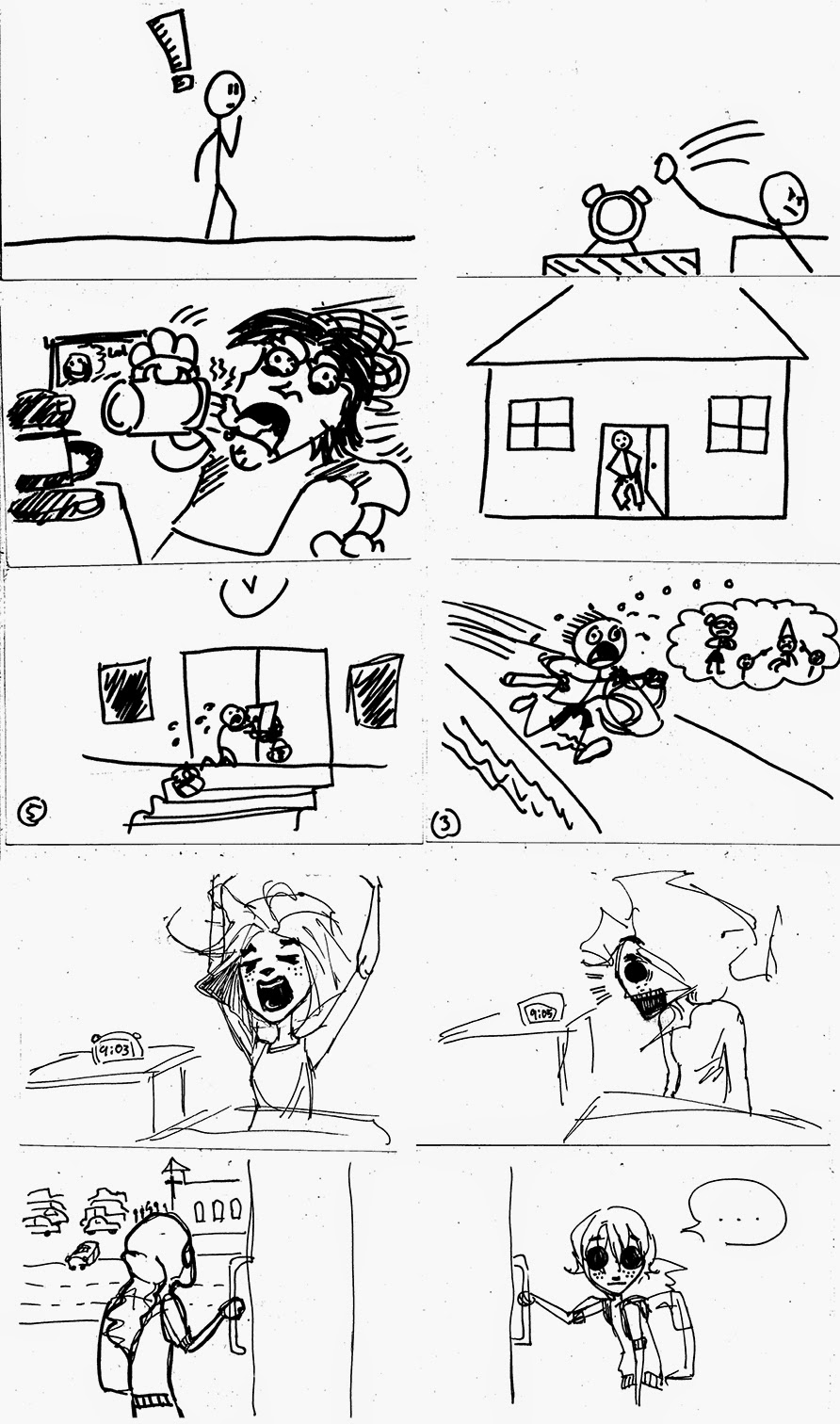 These and a whole host of other in-class exercises prime the pump before we grab the tools of the trade and hunch over another sheet of Bristol to spend the remainder of our time in the studio working out and working up the ideas left splattered all over the walls, the floor, tables, our sketchbooks and brains.
Upcoming posts will spotlight student pieces and their respective creators, and I'll also be putting up a post on resources I use for this specific course as well. Stay Tooned.
at 6:00 AM