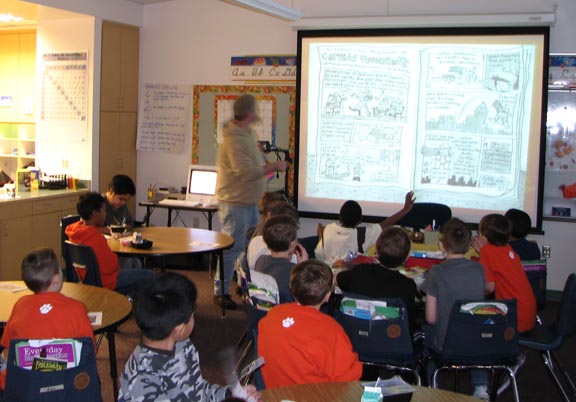 Today I filled in as a backup pinch-hitter for the “Guys Read” program, which is a volunteer program jointly developed by Fairbanks North Star Borough Libraries in partnership with the Borough School District and the Literacy Council of Alaska (and funded by the local Toyota dealership). They get random men from the community to go into public schools and read selections from popular books to groups of 4th grade boys over their lunch period, serving as role models to encourage reading and to help promote literacy. Besides showing that reading is fun, it also helps to break the prevailing stereotypes that it isn’t cool to read and that guys shouldn’t ever be caught dead with a book. I recall during the initial training from the first year (it’s been three now that the program has been up & running) an appalling statistic that the adult male in America now reads an average of one book a year. That’s a stunningly pathetic figure, and maybe goes a long way towards explaining some of America’s current sad state of affairs. The theory here is that young boys never have the benefit of ever actually seeing other males engaged in or enjoying the simple act of reading for pleasure; partially from social peer pressure to not appear geeky (as it is way more cool to be a stupid lout), plus the feedback cycle of being brought up in households where nobody has the time to enjoy a good book.
This stands in stark contrast with my own upbringing; raised an only child by a librarian mother and bookstore-owner dad I remember always being surrounded by books, and they were my constant companions rather than relatives or friends. Every room in our apartments were crammed with ceiling-to-floor bookcases, stacks and stacks everywhere – I was probably prouder as a young teen to reach a thousand sci-fi & fantasy paperbacks in my personal collection than I was losing my virginity. Before that I had spent years as a mall-rat either playing pinball or sitting and reading in the aisles of the bookstore my father managed.
In fact, one of the funnier recent conflicts between my girlfriend and myself was the discovery that in her Midwestern family farm, dinner was a time for family, and it would have been considered rude to bring a book to the table – the opposite in my past, as I recall the three of us sitting around our table each with a book. This would be one reason I still manage to read in my outhouse even at forty-below, old habit die hard.

Some of the influential authors and titles I read over and over again as a youngster, and still have on a shelf in my cabin today: works by C.S. Lewis (“Narnia”), A.A. Milne (“Winnie the Pooh”), Antoine de Saint Exupery (“The Little Prince”), J.R.R. Tolkien (I still re-read “The Silmarillion” annually), Maurice Sendak, William Steig (“Amos & Boris” in particular), Lloyd Alexander (“The Chronicles of Prydain”), Ursula Le Guin (“Earthsea” novels), obsessive collecting of Micheal Moorcock, and endless fairy tales and mythology throughout.

So I really have no experience or understanding with matters of illiteracy; to this day I'm usually in the middle of sometimes a dozen titles weekly, and am a regular patron of both (divided loyalties stemming from childhood I suppose) the local independent bookstore along with monthly expeditions to the university and public libraries.
But now the greatest confluence of events occurred when the social stigma of comic books and cartoons ended, and the genre was afforded new respect and legitimacy (grudgingly in some cases) in the dual realms of literature and art: most educators now belatedly realize that comics might just be the last, best chance they ever have to entice young boys & girls into developing life-long habits of reading.
This is the key angle I’m currently pursuing as a new member on the Literacy Council of Alaska’s board of directors, along with volunteer efforts such a the Guys Read gig: the popularity and acceptance of comics and graphic novels today presents a unique opportunity to really promote literacy in the classroom. In addition to reading, there is also a case to be made for the comparatively worse state of affairs as far as “visual literacy” goes – kids these days rarely get to see an artist create work right in front of them, which cartooning is a particularly effective medium to demonstrate in public settings. Nothing provokes the “room full of monkeys” better than when I start doodling up on the board, and despite my ingrown, reclusive instincts I always wind up having a wonderful time.
*Incindentally, the book we read in class today was Dav Pilkey's "Captian Underpants"

And the sweetest irony of all is that I’m actually a high-school dropout who used to flunk art classes because all I wanted to do was draw comics – a point that isn’t lost on me every year when I do show & tells around the district; talk about everything coming full-circle... >neener-neener< Mrs. Braen!
at 4:58 PM