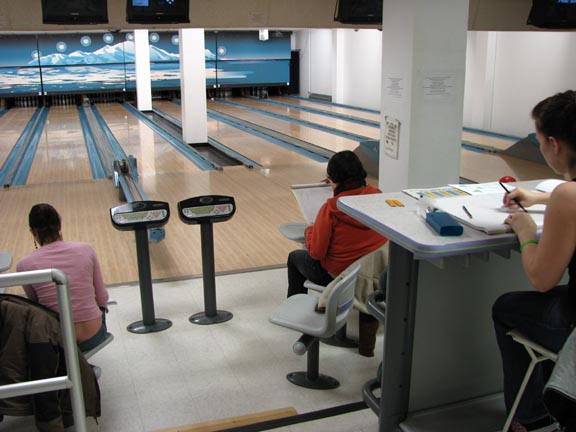 First we grab our pads of newsprint paper & pencils and run over the parking lot across to the Wood Center, where I’ve reserved us the bowling alley. There for the first hour we’ll bang out a warm-up sketch utilizing one-point linear perspective as the basis for the drawing. As an added bonus I get a chance to subject them to the soundtrack for the Big Lebowski, which is a real treat at 8am, not to mention the disco mirror ball and blacklights are an inspiration too. Sure enough, maybe 90% of the initial efforts were way off, and a restart was required after some reminders on basic observational skills.
I didn’t think it was too good of an idea last semester when I took advantage of my classroom being situated right next to a railroad track for an intimate, first-hand experience of what 1-point perspective really looks like; probably the Department of Occupational Safety & Hazards would’ve had a shit-fit if they saw it. So a close second is getting their minds in the gutter instead – a textbook example of line convergence in action.

Then it’s back to the studio where earlier in the morning I’d assembled a dynamic still-life epitomizing the human condition. Just kidding, there’s a pile of planes (assorted boxes & boards + few scattered spherical objects & bottles) up on the center table. Not having the old stash of stuff to, er, draw from, I improvised with a raid on the janitor closet that yielded many rolls of toilet paper & paper towels. The goal of the exercise is to have the objects correctly drawn as being on the surface of the table, as opposed to wonky or looking like their perspective is drawn from someone whose head is somewhere up on the ceiling. As with most in-class exercises this is geared towards helping with their first assignment, and eventually the first critique, which is also handed out and explained today:
________________________________________________________
First critique: Interior Space
On a sheet of good drawing paper, using a border, in pencil:
Draw the interior of a room; any space that you inhabit, that has some particular use or value to you. Include two corners, ceiling & floor.
Also include some indication of personality through some telling objects of interest, or reflect your general state of affairs (ex: neat & tidy, a slob? Books? Cooking? Signs of children or pets? etc.)
• Concentrate on linear perspective, emphasize the lines,
• Don’t forget about using sighting device & internal reference points.
• Frequently re-check your angles – draw only what you see: create a believable illusion of depth.
DUE IN CLASS TUESDAY Feb. 10th
*4 pages/panels of thumbnails of different sample perspectives are due in class Tuesday, Feb. 3rd 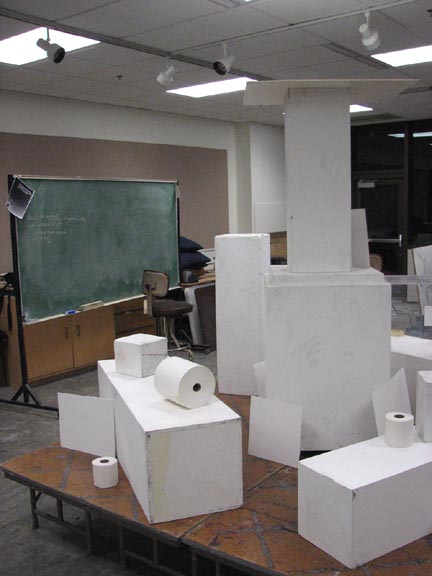 This still-life serves the additional purpose of having me show them how to utilize internal reference points for gauging relative positioning and accurate observation. The pencil as a measuring device comes back into play, along with a secret weapon used as a last-ditch teaching aide: a small piece of plexiglass + dry-erase marker. With the worst-case scenarios I’ll resort to holding this plane up in front of their faces and making them trace the outlines of the still-life, then bring the plexy down onto their paper. 99% of the time this is the clincher for the final holdouts on putting it all into proper perspective.

Depending on the overall progress of the class now I’ll either accelerate the schedule and jump into more challenging environments, or torture them with a couple extra days playing with blocks. For the handful of people that might be bored or way ahead of everyone else, I have them use the still-life a reference model and create a cityscape being destroyed by an alien monster. This class seems ok enough to merit the dropping of a couple days worth of basics, so next week we’ll step it up

Note: The MFA student’s show opens tonight also, which I strongly recommend folks in my class to attend. It gives them a chance to hone a few important skills in being a serious fine artist; mooching food, schmoozing, and gossiping about other artists after the reception. Actually, it’s mandatory for my students to attend a least one art opening over the course of the semester (more on our community’s “First Fridays” at a later post).
But during our class’ break today we’ll pop in the gallery to preview the works and have an informal reaction to individual pieces and the caliber of the overall show. I also take a minute to explain what the differences are between a B.A with an art major or minor, the B.F.A. program, which is roughly another year of upper-level studio-intensive courses that allows both a major and a minor in art (ex: majoring in painting with a minor in sculpture) under the guidance of a thesis committee and topped off by a two-week thesis exhibit, and lastly the M.F.A. graduate level of study.