Had another really awesome and intense "boot camp" for cartooning for a third season teaching comics at the Visual Art Academy up at the University of Alaska Fairbanks. Two classes for two weeks with a total of twenty-two aspiring practitioners of the craft, all immersed in the art of drawing. As each class only ran for an hour-and-a-half there wasn't a lot of time in the studio (compared to the usual semesterly routine of two-and-a-half or three hours per session), but since we met every day of the week there was good momentum in the sequential acquisition of skills and exercises.


One of many highlights: take a group of energetic youngsters + the start of summer vacation + a beautiful, hot, sunny day outside, and spend it… indoors drawing comics. Just surreal to sit amidst a room of such intensely focused passion. While I didn't logistically have the extra time this year to upload everything to any on-line portfolios, here's linkage to previous posts from the Academy back in 2014 (here and here) + 2013 (here and here).


Class schedule: every morning intro and a recap of the previous session w/samples & demos + timed exercises to get the creative juices going; materials + techniques, experimenting with textures and character development; gags/single-panels; strips; one-page personal projects for the official comic book; plus collaborative pages and last but not least minicomics. Seems like a lot to cram in, and it was, but the fleeting pangs of guilty conscience at the workload was more than offset by the great response - plus the added benefit of keeping everybody occupied meant we were all too busy to get distracted. It can sometimes be a challenge to maintain focus and exert some degree of discipline while herding cats, but channeling all that the energy into projects that yield immediate, positive results is a reward that can carry over into virtually any other arena in their life. Above & beyond any accidental instilling of literacy and a love of reading through the medium of comics, that was a shameless plug for the benefits of a liberal education... especially art classes. Natch.


These are two samples of the collaborative page project, wherein both myself and my talented, hardworking studio assistant had to fill in for the occasional absent student. Hence the familiar style and tone creeping into the funny-food-chain. Four different people all contributed to each page: starting first with a simple one-page script for a one-page vignette (either a stand-alone sequence, an excerpt, or simply just an extension of the preceding exercise using a 3-5 panel strip format). Next a different student has to pencil out the sequence on a sheet of 11x17" Bristol board - subject to editorial approval and suggestions from myself and the classroom assistant after reviewing their thumbnail sketches first done on scratch paper. Then a third individual gets to ink the page in using a variety of techniques and textures, including different line weights and utilizing a range of tools. Lastly a fourth student adds the finishing touches of value with a wash, which in many cases really helps to unify the piece and compliments the artwork quite nicely. Meta-lessons included the potential benefits in working with other creators: playing off of each others relative strengths and compensating for any possible weaknesses. Say for example you have great ideas but are unsure how best to illustrate them, or conversely have mad skills but no material to work with. Comics is one of the very few mediums where a team approach can result in a finished piece that draws upon a unique melting-pot approach (synergistic effect).
All of these collaborative pages were then displayed in the main hallway for the Academy's closing exhibition. While we didn't have anything in the gallery proper, our classes were a continuing presence in the high-traffic areas of the department throughout the duration of the camp, making for an effective and entertaining visual aide that doubled as promotional and inspirational images to the rest of the attendees along with anyone else on campus.


Between both classes the students in one day drew a total of two hundred-sixty-four doodles (characters, objects & scenarios) on index cards w/Sharpies, in addition to sixty-four individual panels AND completed twenty-two comic strips of 3-5 panels long. In an hour-and-a-half no less. One of the potential benefits to burying everybody alive in a flurry of index cards and a blizzard of copier paper was to effectively short-circuit the inner critic, which continuously mutters away in the background while attempting to hamstring any progress. Bypassing that internal monologue and silencing the committee means you just concentrate instead on producing pieces: it's the work in artwork. Such a total joy to turn ‘em loose on something they have fun doing + keep pushing for more & more… it’s just amazing to see how much work they can crank out... 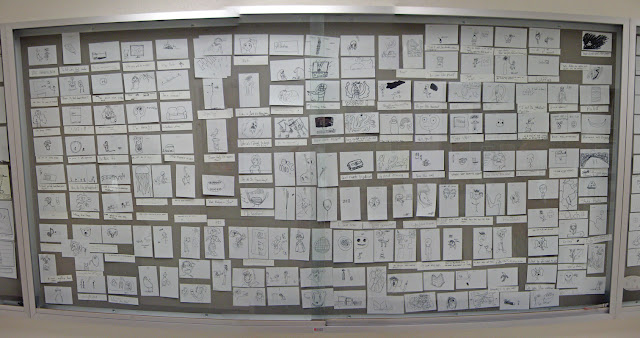 One of the side-benefits of producing such an insane amount of material is the generation of my oft-cited "mulch-pile" which is an ever-growing repository of potential inspiration and raw fodder for anything and everything. There is simply no shortage of ideas: many times I would take students out and kickstart the process of stitching together random concepts, weaving them into narratives which ranged from the utterly ridiculous and nonsensical to insightful and provocative. These cue-cards could be utilized as starting and/or end points in whatever story they wanted to tell, or instead they could serve as a seed which would then germinate in all sorts of directions. The repeated question while before this veritable altar of artistic ideas was always "What if?" Whatever you could possibly imagine, from sci-fi, horror, adventure, romance and humor, to abstracted imagery without any structured meaning and completely open to interpretation. Art, in other words.

As I mentioned earlier, anyone who took the time to wander through the art department up at UAF got to check out firsthand the CARTOON CONTAGION that spreading inexorably throughout the hallway display cases. They featured pretty much everything produced during the classes, and there was still a veritable compost heap of material piled up on a table in the studio. In addition to this they also accrued a compilation of copies from which to get additional pointers and resources.


How to earn a Gold Star in a cartooning class: doodling a delightful caricature of the instructor. That said it's probably the only class they’ll ever have where they are encouraged to make fun of their teacher. Evidently I’m somewhat of a disheveled weirdo at 8am, which is not to say that there's any improvement in charisma as the day progresses.


Here's a handful of samples from the single-panel/gag and strip portion of the classes, excerpted from the official class comic book which was published at the end of the Academy, just in time for a release party on the last day. It was a carrot at the end of the stick after making everyone complete a minicomic, which was then copied and folded for an exchange amongst the students. Between those, another comic book containing all the collaborative pages, a set of copies detailing the progressive stages in my demo panels and a batch of handouts, everybody wound up with quite a bag of memorabilia.


As with all my studio courses during the regular semesters, while students are working away on their assignments, and in-between questions, lectures and critiques, I’ll have ongoing pieces I’ll be working away on in the background that they can always take a break and check out for a few minutes (or peruse the rotating library of books brought in from my stash at home). It’s pretty cool for them to be able to see firsthand the whole progression right up to the published version that’ll run in the newspaper shortly after the session ends. 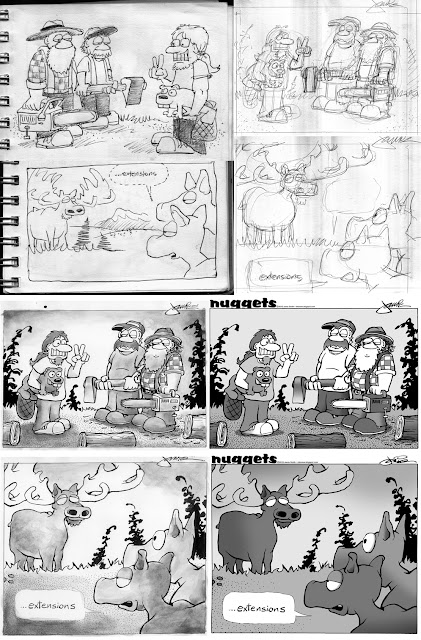 “Eco-logger” + “Extensions”: sample work-in-progress panels that document the in-class evolution from initial doodle in sketchbook to the pencil stage, the inked version to the digital variation for published feature and finally treatment with a wash/watercolor on the original line art. For this pencil stage they can really see how fluid the evolution of the drawing is, and how instead of it appearing as if by magic outta the end of a pen it actually takes a bit of preliminary work playing around with building up basic, simple shapes, gradually refining the composition until it gets to a point it’s ready to ink. Also they get to see firsthand how much more of a "suggested serving" that is when it gets inked over: more often than not it's never really about "tracing" per say, just a template to keep in mind while pursuing the original concept. Hopefully - ideally - all the kinks are worked out early on in the doodle, but there's always intermittent phases in which to modify the panel. That includes comparing/contrasting the relative aesthetics and effectiveness of the wash versus the computer versions: in this case I totally bombed on one of the two demo pieces, but the saving trade-off was in having a comparatively much better digital variation. Incidentally a great meta-lesson in how upping the volume of output equates with a better buffer-zone of good material - it's just a case of increasing the odds you'll A) have a good one and/or B) back yourself up in the event of a tragedy. 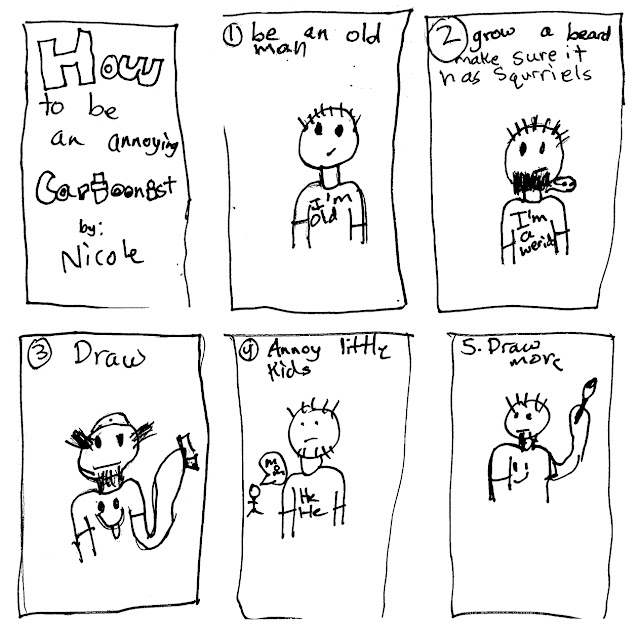 Many thanks go out to the rest of the faculty, Dean Sherman and special thanks to Diana for staffing the gig + most of all my outstanding studio assistant Tara. Also on a personal note, I serendipitously caught what for me is perhaps one of the most edifying moments of my entire career: a detail snuck into the contract paperwork that marks a momentous change of official status from a lowly and humble adjunct to a much more auspicious title:

Postscript: So the first Monday after the Visual Art Academy was over, I stopped by the local independent bookstore, and scored a few used graphic novels (Jessica Abel’s “La Perdida,” Keiji Nakazawa’s “Barefoot Gen” and “The Left Bank Gang” by Jason) and was sitting in the café sketching some cartoons when I spied one of the students working with her laptop… writing a script for her own book.
That's what it's all about folks. 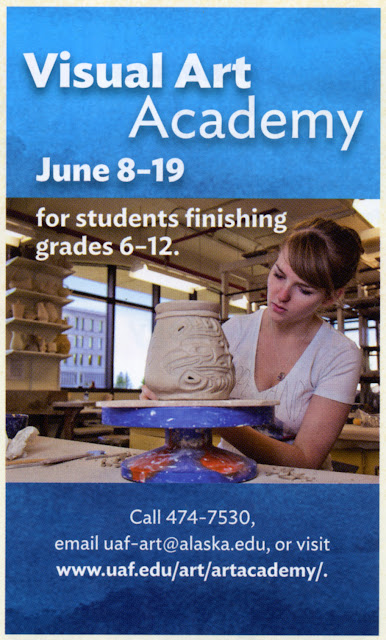