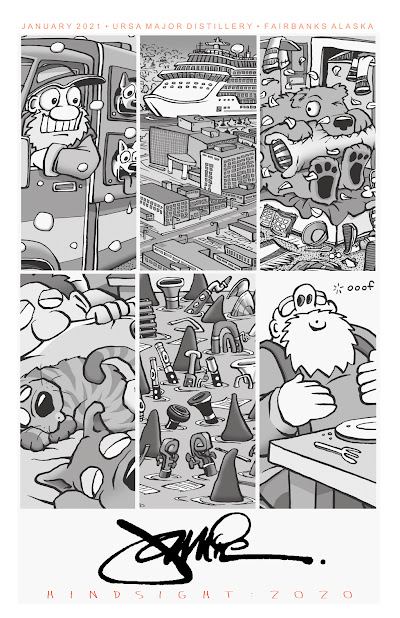 This January 2021 will see the sixth annual retrospective show down at the local distillery (see previous writeups for 2016/2019). Rob and the folks at Ursa Major have been such outstanding and supportive hosts over the years – and this is my best work yet. Obviously with the pandemic still in play, this’ll be the first ever show of mine that there won’t be an official opening reception for. It’s not the time or place, especially seeing how Alaska is starting to crack as the system is strained by our ignorance and stupidity – compounded by the malicious incompetence of this administration. So we're trying a variation on the theme, and experimenting with a new concept: "Private Receptions." 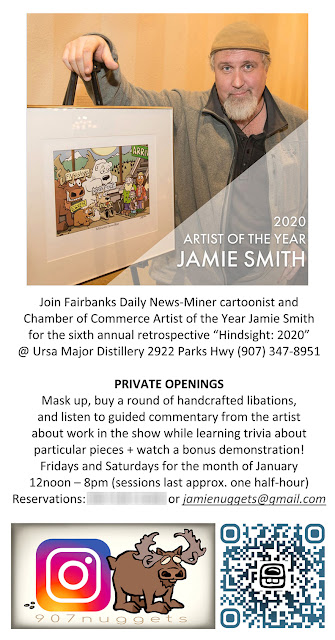 To say I’m strongly conflicted is an understatement. I get very angry at deniers, maskholes, conspiracy theorists and the like, and it’s depressing how we as ‘Muricans don’t follow the advice of scientists - and further disrespect our healthcare workers by flaunting basic common sense. That said I’ve been keeping my mouth shut since I can certainly see how it looks hypocritical to be for example voluntarily teaching face-to-face classes. Sooner than later here on Ink & Snow I’ll post a more in-depth recap of the pandemic from the perspective of my adventures in online education over this past year, but suffice to say, the experience demonstrated it is possible to responsibly conduct adapted versions of classes while following strict safety protocols. Mandatory masking, distancing (w/limiting any close contact exposure to 1-3 minutes), and - even better than the spacious/well-ventilated studio classroom - four HEPA filters in the tasting room along with the usual obsessive-compulsive cleaning routine.


So based on my personal experience in the classroom we’ll experiment with a potential alternative to the traditional mass gathering and offer an opportunity to folks who are comfortable with an individualized “private reception.” Plus it’s just one more small gesture in support of small businesses, who have – along with all of us across the creative community – been pushed out onto thin ice as a result of COVID-19. Note: I’ll also take special care to dutifully document the show and put up another virtual walk-through similar to last year, but this time just film it with the phone and upload video straight to the YouTube channel, as opposed to previous attempts at wonky streaming from the frontier. Plus as an added bonus this year on the official Facebook event page I'll be posting a daily image from the show, so by the end it'll all add up to a virtual taste for the folks keeping score along with the show at home. Seriously - can't blame anyone for sitting it all out: the most important thing is to stay safe and stay home if that's what makes you feel comfortable.

And as previously mentioned, it also turns out I’m rolling over into 2021 as 2020’s special extended Artist of the Year for the Fairbanks Chamber. This seeing as how the pandemic pretty much obliterated all the opportunities normally offered to said spotlight (ex: tables at the Golden Days and Solstice celebrations). Likewise the Tanana Valley State Fair is recycling their logo art again, and there will be a public poster signing/show & tell to showcase the BLM/Eagle Artist In Residency piece in early spring. Guess it seems like this will be my year (again) with an opportunity for a reboot + clean reinstall. After adding in all the recent the accolades and volunteerism efforts looks like I’ll happily die from exposure, or in this instance, overexposure.

Looking over both this post and while prepping the Ursa exhibit, there’s an irony in how I’ve been creating arguably my strongest work ever while paradoxically under the shadow of so much struggle and stress. To qualify, the pandemic's impact was and continues to be a slow-moving disaster for the community - and at a staggering scale as it continues to ripple across Alaska, the nation, and the world. Set against so much rampant corruption and open displays of insanity, greed, fear, hatred and bigotry, and against a rising tide of natural disasters, plus looming bankruptcy, evictions, consequent homelessness, and hunger and death on an unfathomable scale, it’s been a daily struggle against making stupid drawings. Not just the regular ol’ everyday existential ennui, but it bothers me to come across as so superficial in the face of such suffering. I’ll be honest with you; this has been one of the absolute worst times to try and be funny and simultaneously stay informed about just how horrible everything really is. These and other peripheral issues are usually kept at bay by the buffer zone of focusing on what's directly in front of you on the drawing board (the art therapy route) but as of late the news is insidious and omnipresent. Not unlike a certain studio ass-istant.