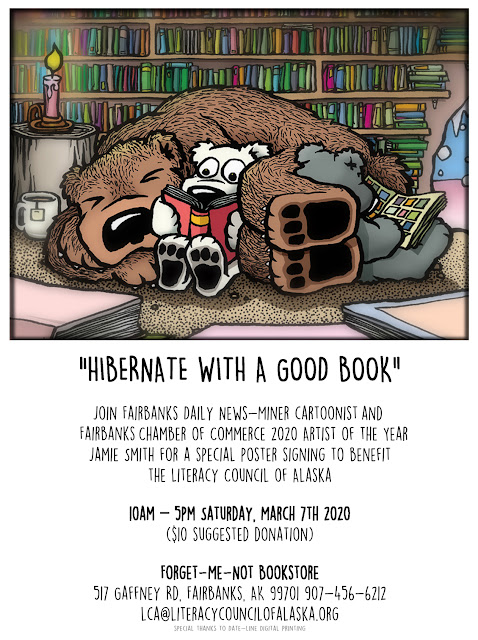 A bonus post this weekend as tomorrow - Saturday, March 7th - from 10am - 5pm down at Forget-Me-Not Books I'll be doing all-day on-site demos and signing a new poster to benefit the Literacy Council of Alaska. Sandwiched in-between the regular college classes a couple days a week, and another series of Artist In Schools residencies (more on those later in an upcoming post), this will be a real benchmark as far as events go in an already busy year. Oh and only the best thing I've ever drawn to date. Also.


And it isn't just a reminder to Interior residents who are still going through withdrawal from the closure of Gulliver's that we still have an alternative independent bookstore in the 'Banks, but more importantly it's an opportunity to spotlight the Literacy Council of Alaska and all the important work they do. It's been six years since my last poster, but one thing that hasn't changed is that if there's one cause that transcends everything else currently going wrong with the world, we'd be in a whole lot less of a mess if more people were literate. 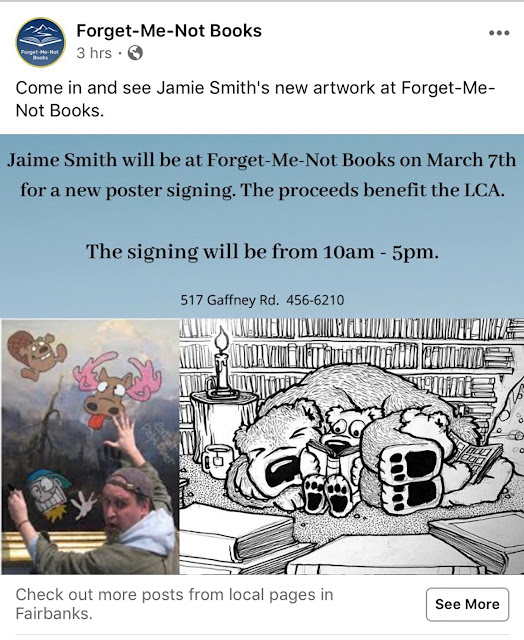 Ostensibly after getting Artist of the Year, the Fairbanks Chamber of Commerce will be showcasing whatever I'm up to for the entirety of 2020. And even though there's lots of activities ahead, this one event in particular I'm really pleased to get the signal boost all across the business community. 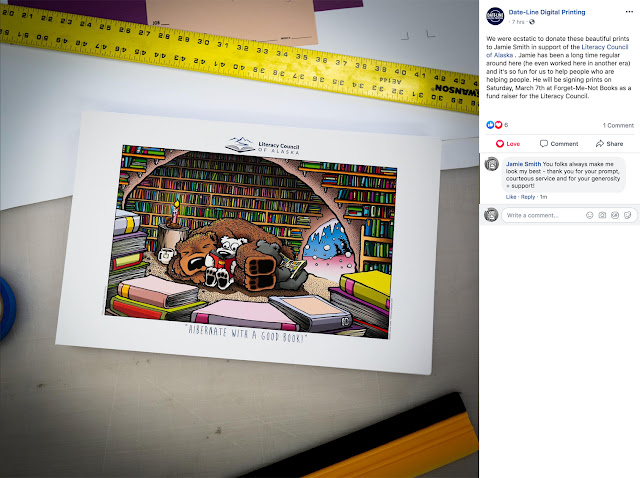 And an extra-special note of thanks to all the folks down at Date-Line Digital Printing, without whose generous contribution this wouldn't have happened. Great work by really great people - they've been making me look good for decades now.


Ever since the original panel ran as a Nuggets cartoon, my usual marketing reflex kicked into high gear, and a lot of PR has been channeled across different platforms, with press releases hitting everybody in print media, television, radio, web, and good old-fashioned handing out of hundreds of fliers all around town at every opening & event for months. 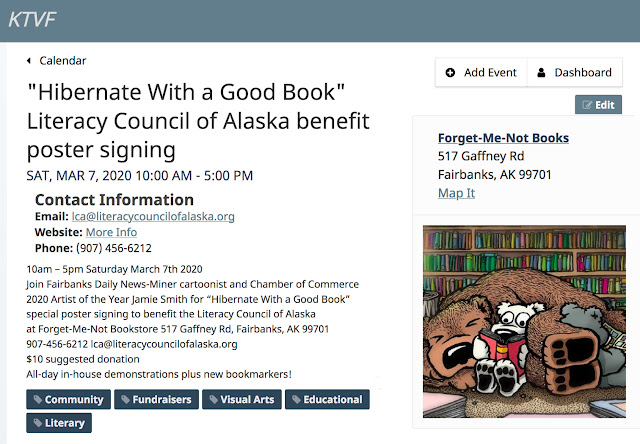 Again, it's a fantastic excuse to capitalize on the brief window of relative fame afforded me from all the attention and channel it into something far more crucial. And it also gives a bunch of other folks in the community a good cause to contribute to and rally around. 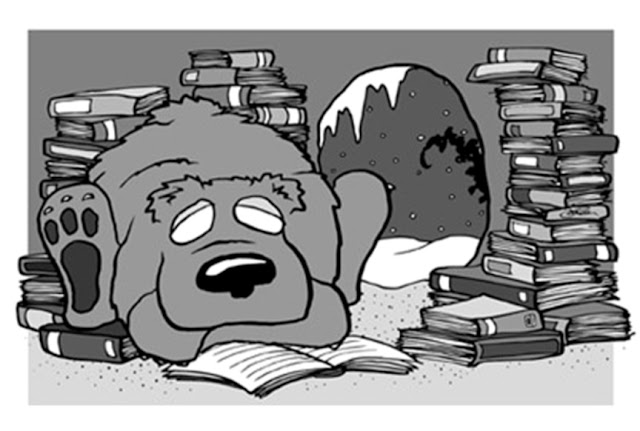 Another funny insight was how well after sketching out the initial concept I was reminded of a much earlier illustration done for one of Greg Hill's books (his second one from 2010). More subconscious cannibalism/self plagiarism? More like evidence, along with last year's "Spring Breakup" and most recently "Four Studs," of gradual improvement in my work - at least as far as technique (maturity + quality of material maybe not so much). And this piece definitely proved my instinct right after rejecting the first idea - though you can see the seeds beginning to germinate with the background wall of books. 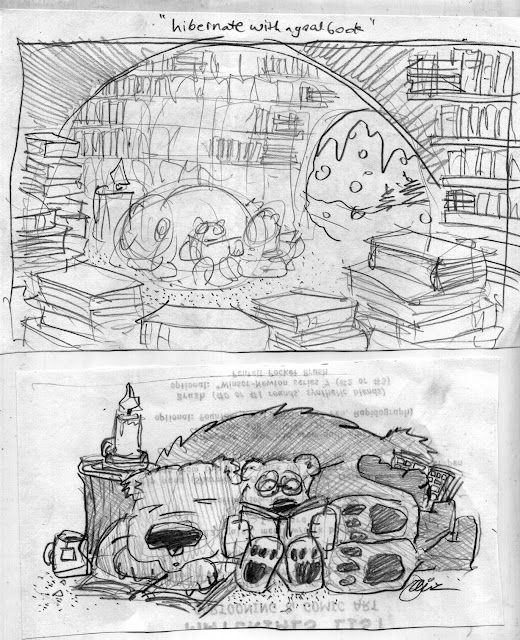 Any pride I have I making anything is usually temporal, about as memorable as making a meal. As in, after eating it’s basically over, unless you are a compulsive foodie and document it with a picture. So when I look at an image I’ve drawn after the fact, it’s like hearing an echo that grows fainter with time and the moment dims. Perhaps the constant obsessive drive to keep creating something else, chasing that elusive spark that fires up and fuels the drive to make more, is a compulsive instinct to feel something again and again.


Nonetheless there are occasional instances where I like to linger in the process, and, well, draw it out. Several hours just to color in the back wall of books first initial pass then a second to cut contrast, and a third if you count the last overall search & destroy hour hunting down stray pixels). Six-hundred-sixty-odd books, after hours of tedious detail yielded the desired cumulative effect. In fact there was a teaser post last month on how much time was invested in this: what usually takes a few hours at most stretched out over three days of continual work. 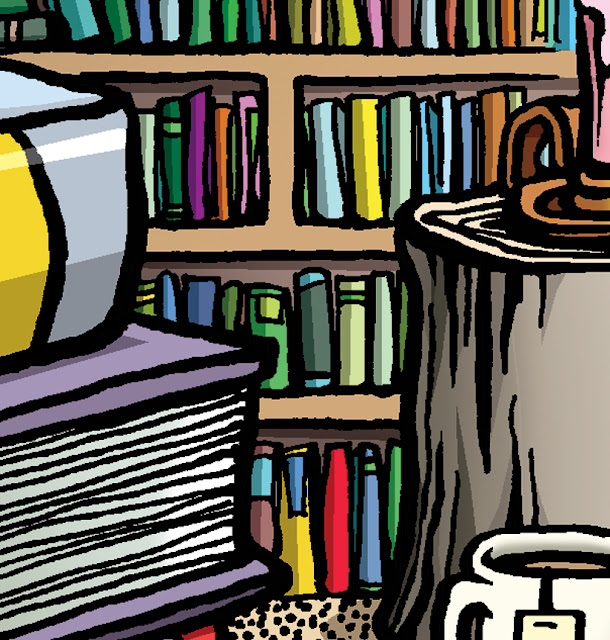 On a related note, many years ago I reigned myself to the fact that it doesn’t matter a damn bit how well one can draw when making a cartoon – it’s all about the joke. The old industry adage that a good joke will sell a bad drawing is true, it shouldn’t ever preclude one from striving for constant improvement in rendering abilities. At least that’s the omnipresent teaching impulse at work, boomeranged back onto me. I mean, there’s the baseline improvement that comes with constant practice, but in my experience that eventually plateaus (ie flatlines) and it takes something else to really push yourself into new areas. 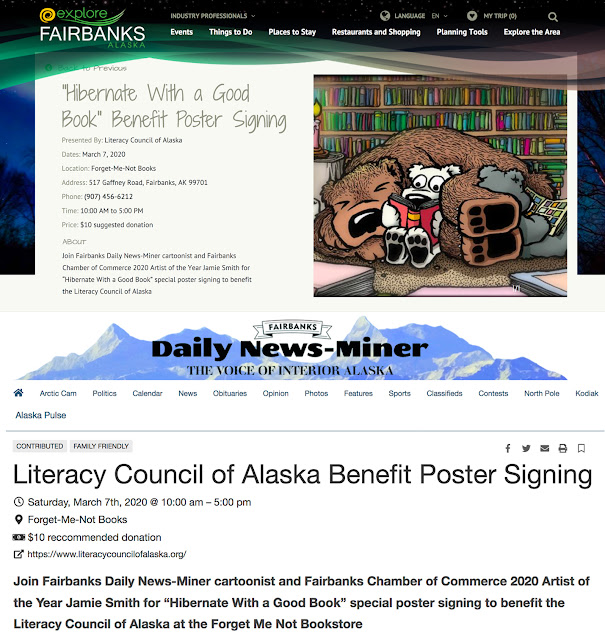 I knew that this particular panel was different when a long-time fellow practitioner in the arts was openly complimentary, even incredulous at this when I previewed a proof to a few folks. That really meant a lot, as nobody else in the artistic community ever cares to do that anymore. Maybe the assumption is you’ve been at it so long you’ve become inured to compliment + criticism alike, or worse, thinking one is above it all. I known more than a few artists like that, and point to time spent teaching in the classroom as a continual reminder that I'll never know it all, there's always something new to learn - and most of all the ultimate lesson in seeing firsthand when students surpass me in ability. 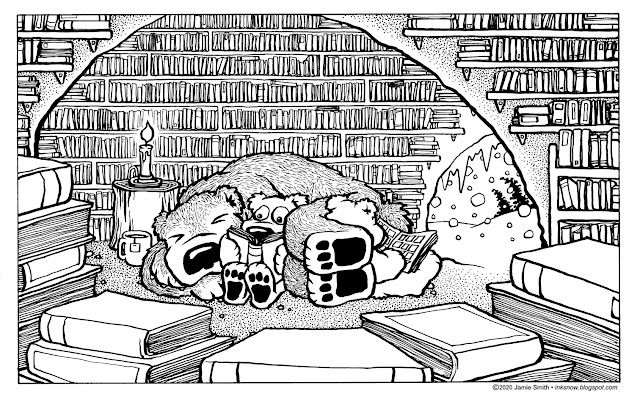 Here’s was another subtle difference: it is rare as hell for me to actually start breaking into a big ol’ grin while I’m working on any particular piece. That did at several key points in this panel, like lean back in the chair and stare at it, coming up for creative air as it were. Towards the end when it was all coming together, I couldn’t help but smile to myself at the feeling of quiet accomplishment. As in, this is the best damn thing you’ve ever drawn so far in your entire life. 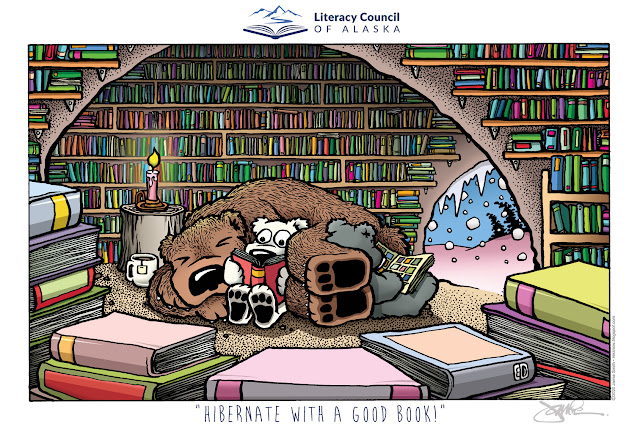 Whatever. Now get to work on the next one.

PS: Even after all these years of appearing in the pages of the paper, I still cherish running down to the corner store early on a Sunday just to see firsthand what it looks like all printed up. Kinda like xmas morning and unwrapping presents - a gift that hopefully brightens up somebody's day. Thanks for reading, and see you in the funny pages.