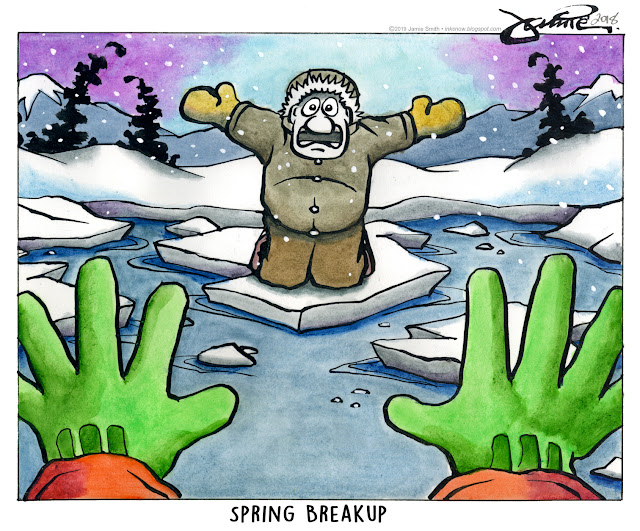 After all of the recent Throwback Thursdays and retro postings - mostly hinging on the Freeze-Frame feature - I occasionally wonder what a reboot would look like with random panels from the past. In theory whatever one chosen ought to look a little better. Or at least that's what you'd hope for... 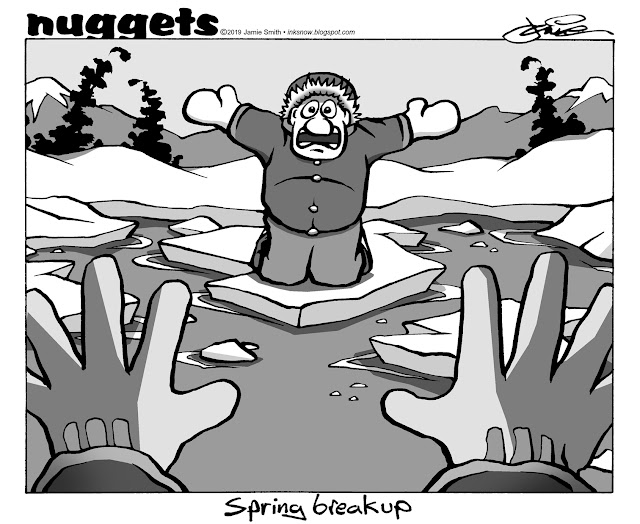 Like a lot of artists I tend to wince at the work of my formative years... but hey, they're just little breadcrumbs all leading back up to where I am today, so it can't be all that bad. Which is to say, they're not worthless at any rate: they served a purpose as stepping stones, and/or in this instance, are notches on the measuring-stick.

Which, for those of our viewers keeping score at home, covers the very first incarnation of this cartoon way back in 1986, then again in 1991, and finally both the digital and the watercolor wash variation of the reboot. That's a full spread, and a great encapsulation of an evolution that's been unfolding for over thirty years up here in Alaska. "Glacial pace" would be apropos. 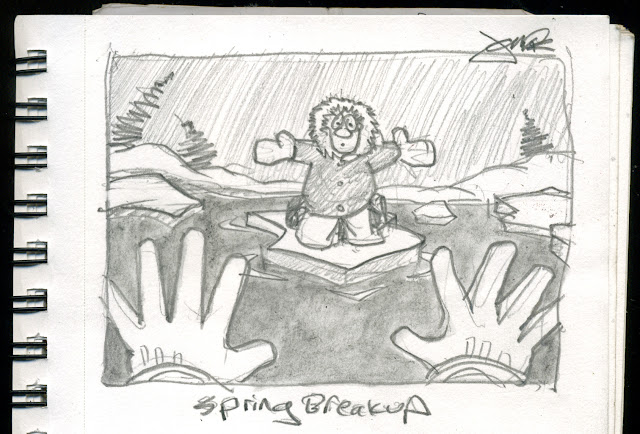 And yeah, supposedly your not supposed to compare yourself to others, but on the other hand if you can't objectively assess growth in relation to your own work, at least in retrospect, then you might lack a critical facility which could handicap any substantive insights about your personal progress.

Ideally at some point it evolves into a self-sustaining, self-fulfilling prophesy, an Ouroboros of art, where your own work begins to inspire you to create more art. That's literally drawing from the well. 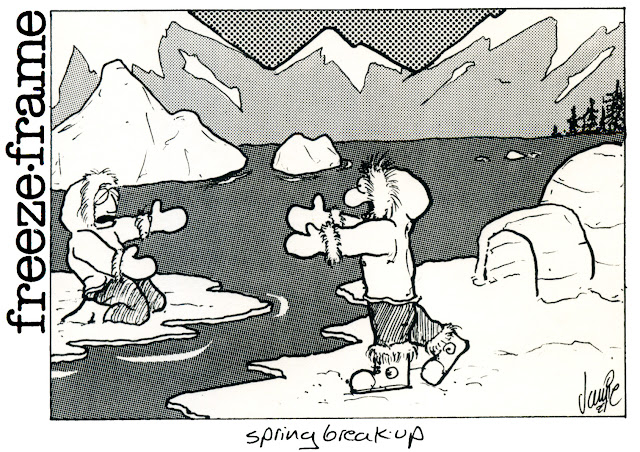 All this puts to the lie that is an artist's best years are always behind them. The so-called "creative peak" is a mythical metric that's only useful as an excuse to make yourself feel like shit. Like we ever need any help with that. 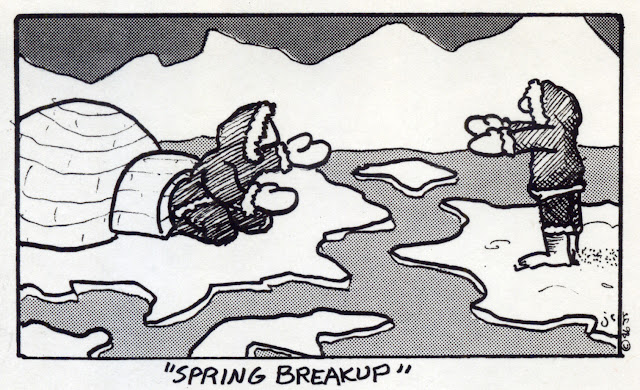 Recently I became aware that one of the revered, sacred texts of art, Cameron's "The Artist's Way," was given a secular reworking, or at least the core set of principles. Way back when I read the original book, once, then put it on a shelf along with all the other dusty, musty art books and self-help guides, and have never looked at it again. Been too busy making art you see. Kinda like when I was a Philosophy major, I am reminded that Life is what happens to you in the meantime while you're busy studying the Meaning of Life. Here's an appropriate example of the tweaking:


New: 8. As we open ourselves to creativity, we will see powerful but subtle adjustments that lead to personal and artistic growth. (Old: 8. As we open our creative channel to the creator, many gentle but powerful changes are to be expected.)

The original ranks right up there with similarly mealy-mouthed, evasive phrasing of any 12-Step group's theology-lite, and is ultimately about as helpful. This reboot removes any hint of the supernatural, and instead replaces it with equally effusive and nebulous artsy-fartsy. Every so often I have a student who gushes about how awesome The War of Art is, or how much Drawing on the Right Side of the Brain (an outdated and unsupported theory which is a pet peeve of mine) has changed their life. I even have one recommended text in my Advanced Drawing syllabus: "Art & Fear" by Bayles/Orland - it's less than half the pages and doesn't even have any pictures. Or watch the latest TED talk (the contemporary, multimedia version of on an online self-help manual) - hey it's all good whatever, that's fine. Never deny yourself anything that might possibly inspire you to make art. Just make sure you're doing it all along anyways, nomatter what course of action - that's the key. Just as with the traditional, disciplined structure of a formal class, you should eventually start to see improvement. These differences tend to get more noticeable over time, as evidenced by the posted examples.