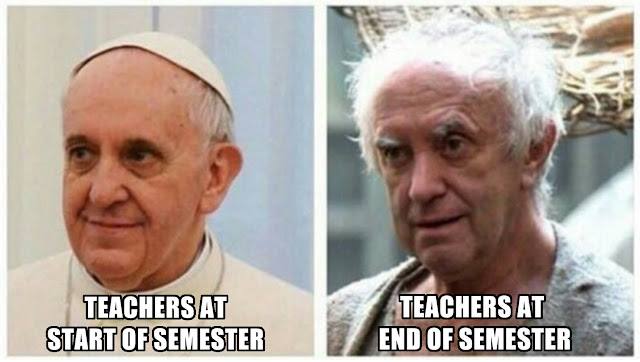 Seems I skipped last fall semester's recap (backlinks to more recent ones here for the spring and summer), which reflects an overall ramping down on such extracurricular posts. Which is to say, it's also not indicative of the quality of the student work or my enthusiasm for education - just busy with other things. (More below the fold...)

But this most recent class was noteworthy for a couple reasons: one, it was by far the smallest I've ever had, and two, the mix contained several comparatively older folks (as opposed to a majority of incoming freshman). That perspective of experience + maturity shifts the dynamic and really enriches the overall experience in my opinion, and as a teacher I really appreciate it as a refreshing change of pace. Maybe it's also on account of the perception that someone's actually listening and taking what I say seriously for once.


Another reason for the drop-off in attendance was normal rate of attrition due to both it being an 8am class - not to mention starting up deep in the bowels of an Interior Alaskan subarctic winter - and as soon as it becomes apparent that this isn't an "easy" course and the workload is more than what many expect for a Beginning level class. Putting the "work" into "artwork" as it were.


Personally I went through several phases of mounting existential dread at facing the daily onslaught of emails in the in-box. Sometimes I drop the balls while juggling multiple responsibilities, and avoiding the flurry of queries and solicitations just shunts it off to make another day even worse. Still I managed to stay somewhat on top of emails from students and give some digital advice on works-in-progress.


These Photoshop tweaks only take a few minutes each, but multiplied by an exponentially increasing number of students it can easily turn into a time-suck of several hours. While this isn't an on-line course I use this as a technological supplement to critique and give feedback as an option to those who need it - and it also doubles as an indicator of individual intent. As in, they get flagged as wanting to actually improve and learn. Whoah, right?

Something that I occasionally see but not to such a degree as this, was an excellent example of how forms can be rendered using an expressive, organic line and still impart a sense of depth, volume and even motion. So it serves as a reminder to many (and myself) that one doesn't necessarily need to master an absolutely perfect photo-realistic style to achieve "good" (ie believable) art. 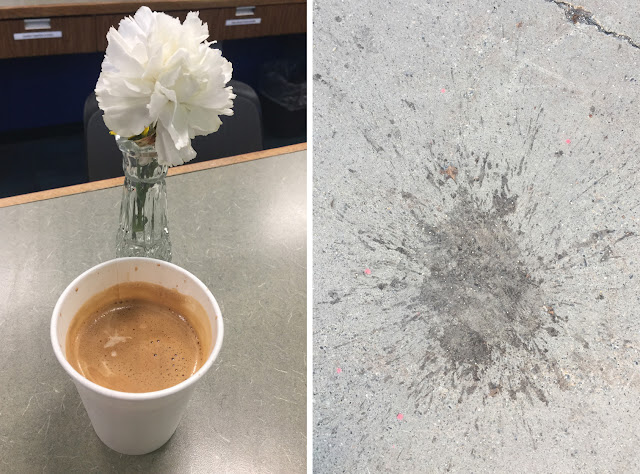 As an aside, my morning ritual of banana bread breakfast + double doppio was upped to a six-shot cup of sludge towards the end of semester. Which is also about when the pile of vomit outside the pub that I had been stepping over for a couple months finally became etched into the concrete. Ahhh the joys of living in Alaska, where logistically speaking, cleaning up messes is largely a seasonal concern.


I often hang around the art department after class just to wander around other studios in hopes of seeing how former students - many now art majors in either the BA or BFA program - are progressing with their work. I caught one such person in Native Arts working on a mask design off of his sketchbook studies, which is something I continually stress at the Beginning level as an important skill to cultivate. To see it being actually used warms my little art-heart to no end. Also a former advanced student's work showed up as a design on a tshirt that I recognized as one of her in-class pieces. Wait - you mean it's possible to make a living money at this too?

Being small in numbers meant that there was no place to hide, and that extended to me as well. Being able to demonstrate everything that is expected of the students is a no-brainer (yet still not done by many tenured faculty who just expect the student to magically learn on their own). This means stepping up and stepping in - like the above-pictured caricature exercise - if I ask them to not be afraid of exposing themselves by showing their work regardless of it's appearance and their personal feelings of self-worth than I damn well better be able to do the same. 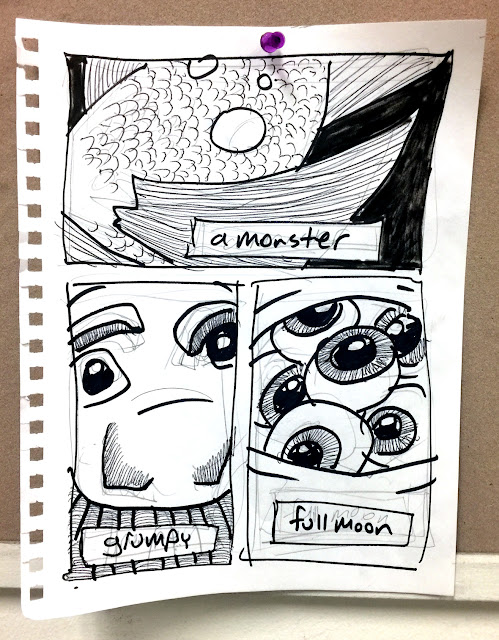 I'm still wallowing in the wonder of pushing comic poetry as its own thing unto itself now: after so many years of doing it anyways (aka "Vignette" assignment), finding out it's evolved into it's own academically legitimate artform is positively delightful and empowering.


And as a harbinger of things to come, or in this case, all good things coming to an end, this upcoming summer sessions will mark the final Cartoon & Comic Arts course for the foreseeable time. This on account of someone in some cubicle discovering that the time constraints for offering a "special topics"class had expired, oh, about a dozen years ago. The option to submit paperwork and make it an official offering in the catalog was extended, and respectfully declined. One might think that after approximately forty semesters, actually hiring the teacher (as anything other than an adjunct) might be a better way to ensure and maintain such popular, quality offerings in the future. So I'll just take my cartoon ball and go home I guess. 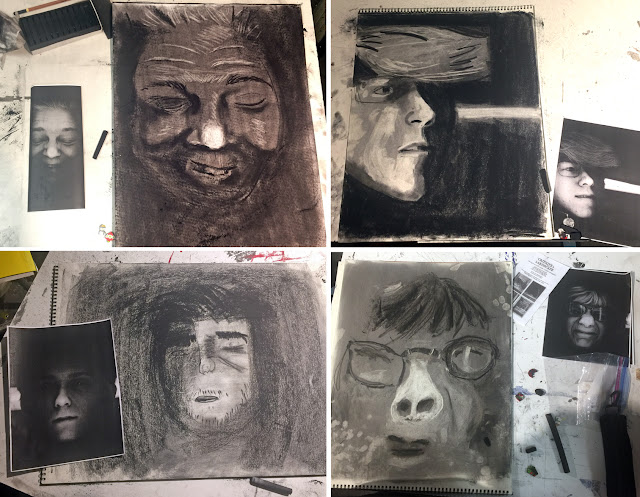 Making art is messy - both inside and out. It's all a work in progress: generating an impressive amount of experimental chaos is a fair indication that progress is being made. Instilling a sense of faith is perhaps one of the hardest things to get across to students: so often these temporary frustrations and setbacks are allowed to kill off aspiring talent, and it happens regardless of age. 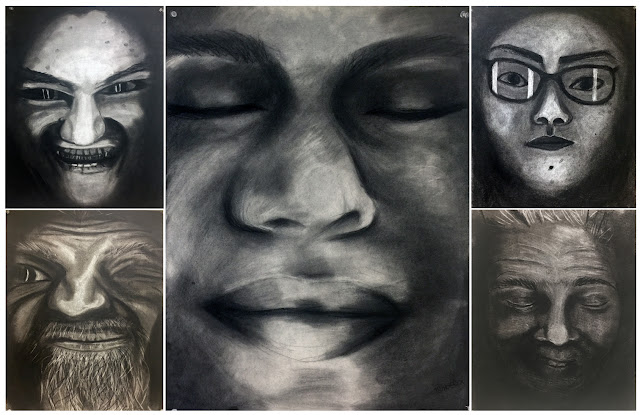 Just hang in there and work through it - trust it will eventually improve. That or you'll come to accept it for what it's worth, that this is what it is. Worked for me. Still does in fact. 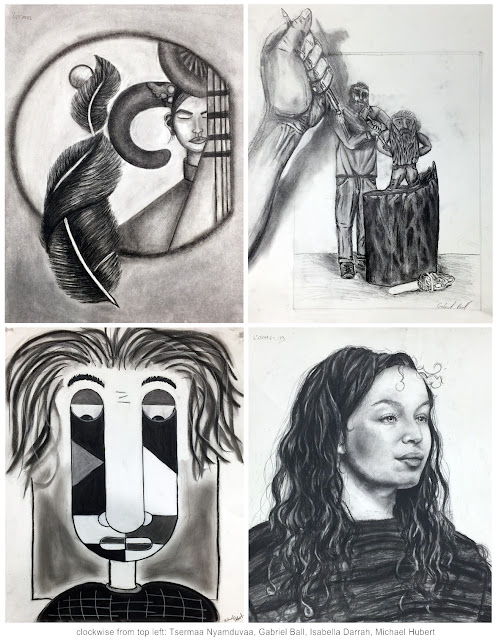 PS: A reminder that registration is still open to jump into one of the summer sessions: There's a stacked Beginning/Intermediate/Advanced Drawing class for the second 6-week summer session that meets M-Th from 2-5pm, and Beginning/Advanced Cartoon & Comic Art is from 6-9pm. Hit the link and Select Term: 2019 Summer > Select Campus: Uncheck All > Fairbanks > Subject: Art. 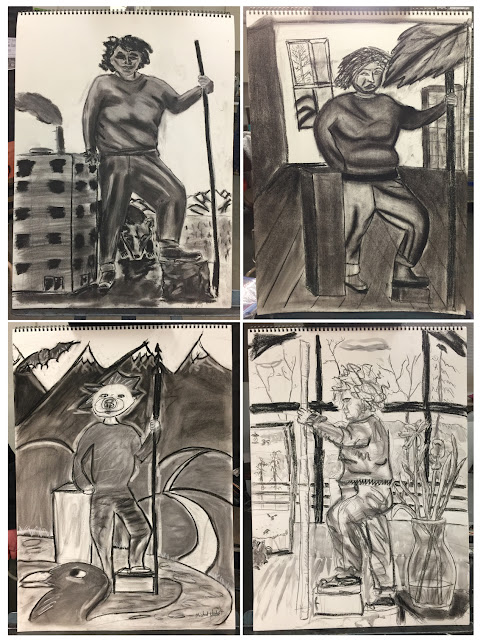