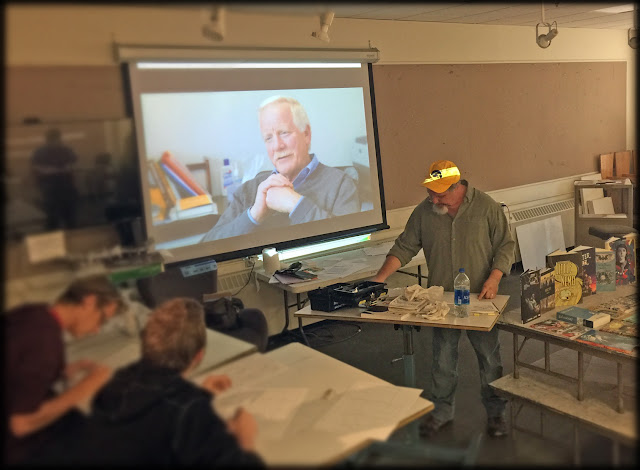 Confluence of Comics: Drawing a demo comic for the drawing class, who are all drawing their own comics, while in the background I'm playing a documentary about drawing comics, next to a huge table piled high with comics. Not to put to fine a point on it, this is one of the few days a year that I absolutely live for. When all the elements are aligned a sort of mystical + magical moment occurs that's truly on a Stonehegian scale of cosmic transcendence. And then it's back to reality for the other 261 days of the year.

Following closely on the heels of a return to the 2018 Visual Art Academy after last year's hiatus, I rebooted the Cartoon & Comic Arts course for UAF Summer Sessions for the twelfth year. Again and again, without fail, every single class is my absolute favorite one of the year, filled with my favorite students doing their best artwork ever. Of course there are always a couple who become quickly disabused of the naive notion that it's all fun & games, like a slacker student's dream opportunity to have fun and get some easy credits... this really is a boot-camp of creativity, an everybody puts out an impressive amount of energy and artwork.


Going off of the assumption that it's a good class if I myself learn something, I picked up on a few new things. One of the wonderful side-benefits in teaching this class is the picking up on new and different artists and techniques, particularly all the favorites from my students - so over the years they've turn me onto some amazing stuff that, left to my own devices holed up in the cabin alone or online communities I would otherwise have remained unaware about.

Caught up on some classic DC back titles (a lot of Batman... "Long Halloween," "Killing Joke," "Hush," … plus "Flashback" and "Kingdom Come." Also scored remastered Asterix Omnibus #1 & Bernie Wrightson’s collected Creepy & Eerie stories… plus recent work by Evie Wyld/Joe Sumner (“Everything Has Teeth”), Brian K. Vaughan/Cliff Chiang (“Paper Girls” vol. one) + new releases from Jim Broadbent/Dix (“Dull Margaret”) & Dave Gibbons (“How Comics Work”). Also "Killing and Dying," short stories by Adrian Tomine, “Why Comics? – From Underground to Everywhere” by Hillary Chute, “This One Summer” by the Tamaki cousins. Oh yeah, and working on my own stuff… 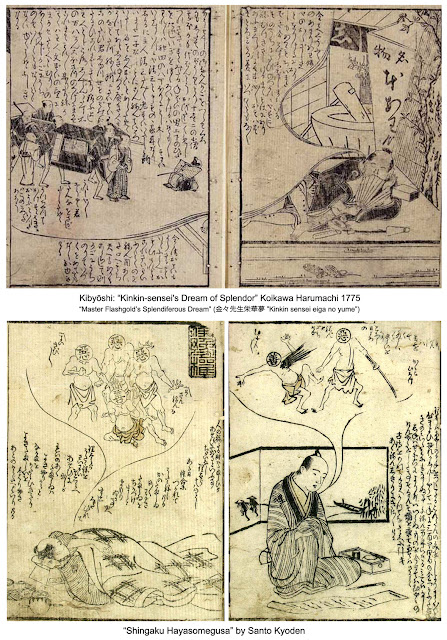 Another educational avenue I wound up turning down and researching was the historical genre of Kibyōshi comics, arguably one of the earliest manifestations of the comic art form. This was in rebuttal to the of-repeated claim that comics are a uniquely American institution, such as baseball and jazz. It is more accurate to refine the terms to say superhero comic books per say. 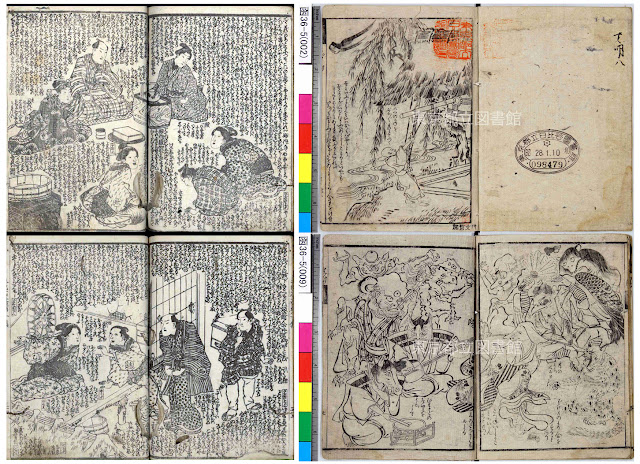 In my history overview lecture, we see examples of early image + text with Egyptian papyrus scrolls ("Ward equates visual humor in Egyptian art to the “modern cartoon.” Sometimes the image demanded an explanatory hieroglyphic and sometimes the image was enough of a joke"), Mesopotamian cylinder seals, church doors and chapel frescoes. These Japanese influences make for a splendid cultural addition to the mix that evolved into contemporary comics. 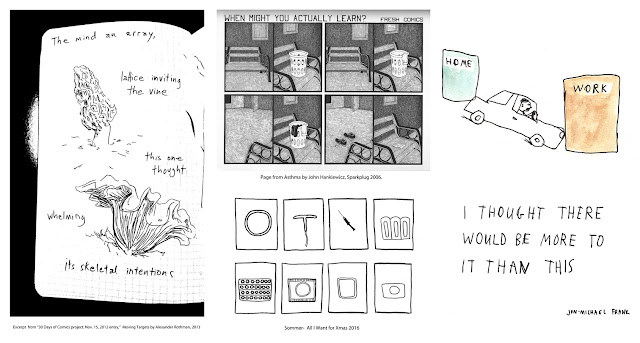 Speaking of such, another thing that got me all excited was to stumble across a concerted effort by a dedicated community to showcase a hybrid genre in the field of comics: comics poetry I was personally so delighted to read across so many different approaches to this juxtaposition of image + text, though by no means limited to using panels, gutters and other conventional hallmarks (in many instances, restrictions) of the medium.


"Comics poetry is a hybrid creative form that combines aspects of comics and poetry. It draws from the syntax of comics, images, panels, speech balloons, and so on, in order to produce a literary or artistic experience akin to that of traditional poetry. Comics poetry" can be used to differentiate the genre from written poems later interpreted in comics form, which is also called "poetry comics." (Wikipedia)

"...at the end of the day, more than any other practitioner, a poet is just dealing with words.... Words aren’t necessary for comics, but of course they’re there to use. Panels aren’t necessary, but they’re also there to use. Where the poet’s toolbox contains every imaginable arrangement or manipulation of words, the cartoonist’s holds analogs for the visual elements of the page." - Alexander Rothman, editor-in-chief of Ink Brick

“Comics poetry isn’t poetry as text with comics images; it’s the whole comic as poetry. The images, the words, the structure, the rhythm, the page, all of it is used together to create the poetry, to create comics in a poetic register." - Derik Badman