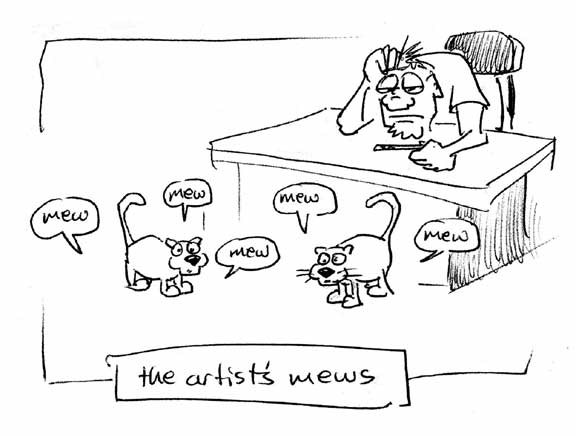 For me personally, having a vast repository of work-in-progress (in the form of sketchbooks crammed with ideas) ensures the creative well never runs dry. Still that never interrupts the continual quest for new material, and it's a deeply ingrained habit for me to always have the artistic feelers out in case something somewhere trips the funny wire or otherwise inspires me. You never know where, when or who will provide fodder, and being receptive to these bread-crumbs. And this is a supplement to the craft-oriented aspect I teach in the classroom; with cartoons in particular, the idea or concept is paramount, and having all the talent in the world at drawing won't make for a funny cartoon.
The bare-bones/white-knuckle approach involves sitting down at a clean desk with a stack of current magazines and random books piled around me, plus the sketchbook, scrap-paper, pencil, pencil and eraser at hand.
My brain sort of partially disengages as I skim over the material; like the old Doctor Strange ethereal body thing, I'm in a detached state of objective awareness when culling through a stream of data. There's a particular theory of humor that dovetails with this; the whole area of associations and non-sequiturs has been a fascinating study to me for years.

While brainstorming, snowballing (bouncing ideas off of others in a group setting; having them take a shot at putting their own spin on an idea before lobbing it over to the next person), and another technique called "switching" (changing or repositioning the context of a gag around until it no longer remotely resembles the original point-of-departure - this as opposed to "ripping off") are time-honored methods of producing material, there is a another way which relies more on stream-of-consciousness and the subconscious.

I remember seeing a documentary a long time ago that had Arthur Koestler talking about his theory of "bisociation," (The Act of Creation, 1964) and how the generative process behind a poet coming up with a new metaphor, or a scientist with an invention, was the same underlying technique used by an artist to come up with a creative concept, or in this case, a comedian or cartoonist's new gag. Bisociation can be defined as "simultaneously referring to two frames of reference or associative contexts," and "the coming together of two ideas not previously associated to combine and produce a third, distinct from either of its components." This sparked off a lightbulb inside my head about just what exactly was going on with what I do and how it works - not some revealed and mysterious process but a quantifiable, observable phenomenon - the science of creativity! Or not...

The only other formal source of research I'd ever come across after that which came close to explaining this theory, and also linking this process with artistic creation - specifically with cartooning, was a book called The Cartoonist's Muse: A Guide to Generating and Developing Creative Ideas, by Richter & Bakken (Contemporary Books, 1992). Associative concepts are discussed, like congruity; the similarity between unrelated objects (at the heart of verbal humor such as puns, double-entendres, and rhymes) incongruity (the perception of inconsistency), reversals (inverse situations like a person in a goldfish bowl), and the pairing of opposites (big/little, fast/slow, ancient/modern etc.) are some of the key methods addressed.
Previous to this book I'd only seen the usual collections of cartoons, or "how to" guides that were the aesthetic equivalent of drawing a cat with a circle and triangle, totally avoiding the nuts-and-bolts of this underappreciated part of the whole skill in cartooning. Sure, this runs the danger of killing the joke, but faced with the alternative viewpoint, which usually falls along the lines of a "gift from god" or "either you got it or you don't" or my favorite "it's something you're born with - you can't teach it." I call bullshit on that attitude, and never stop exploring and learning as much as I possibly can about the matters that interest me.

Wordplay is a crucial aspect of what I do; funny-sounding ones, literal metaphors, jargon & slang, clichés, substitutions, distortions & exaggerations, to name a few. I sometimes use photocopied lists of idioms ("dog-eat-dog world," "bang for the buck" etc.), sayings & proverbs ("Live fast, love hard, die young," "Nothing is as bad as it looks," "A good lather is half the shave" etc.); these make for some ready-made captions if not points-of-departure unto themselves.

Then there's a recent title from the cartoon editor of the New Yorker magazine, Robert Mankoff, "The Naked Cartoonist" (Black Dog & Leventhal, 2002) which begins to coalesce all this:
"The demands on creativity made by the cartoon profession make it the ideal laboratory for studying the creative process. Cartooning is simply creativity in overdrive. The simplified nature of cartoon ideas, the way they quickly change, mutate, breed, and evolve, make them ideal specimens ... they're the equivalent of an organism like the fruit fly in genetic research."
"Each good idea that gets published becomes part of the collective cartoon unconscious. At a certain point, a critical mass of ideas is achieved. There is then enough idea fuel to sustain a chain reaction of ideas indefinitely."
" ... the dreaming process, which collects the ordinary material and experience of our waking lives and, through the mechanisms of association, distortion, and exaggeration, transmutes them into something strange and new, is analogous to what cartoonists do when they're awake."

In 2007 director Chris Brandt released a documentary DVD called "Independents - A Guide to the Creative Spirit" that features interviews with such contemporary comic artists like Wendy Pini (Elfquest), Tony Millionaire (Sock Monkey), Linda Medley (Castle Waiting), Shannon Wheeler (Too Much Coffee Man), Keith Knight (The K Chronicles) and many others. While normally I loathe showing movies to classes (based on bad experiences with former teachers bailing out on actually doing their job, as in what am I paying you for again?), this would be one I'd make mandatory at some point, or at least have on reserve at the library, followed by a quiz. This movie has some blunt, honest advice and it comes from folks in the trenches that have the experience and a unique creative distinction well worth listening too.

The final item in this little smorgasbord of a post is something called "Oblique Strategies" by artist Brian Eno (whose music I’ve been a fan of since highschool) and Peter Schmidt. They have produced editions of 100 cards each that are creative ice-breakers, designed to "enhance problem solving" and sometimes help me to mentally reboot. "Random Strategies" is website that displays rotating samples from the Oblique Strategies - here are a few samples:
- Imagine the piece as a set of disconnected events
- Don't be afraid of things because they're easy to do
- Giving up in disgust is not the same as admitting defeat
- Balance the consistency principle with the inconsistency principle
- Are there sections? Consider transitions
- Make an exhaustive list of everything you might do and do the last thing on the list
- Remove specifics and convert to ambiguities
- You don't have to be ashamed of using your own ideas
- Discover your formulas and abandon them
- Repetition is a form of change
- Turn it upside down

*None of this in any way comes close to that brief window of opportunity each morning in the outhouse though.
That and doodling when I should be paying attention...
at 10:40 AM