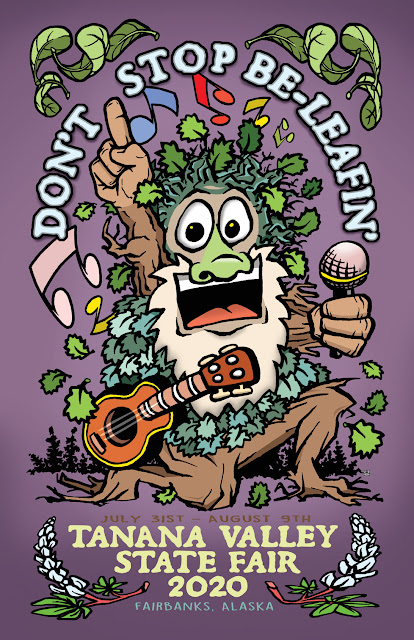 Added another feather to my cap (or in this case, leaf to crown?) with an invitation to do this year’s Tanana Valley State Fair logo. What a wonderful experience working on such a warm-hearted tentpole event in our community.


What started out conceptually as an Ent (ex: Tolkein’s Treebeard) channeling Freddie Mercury morphed into the Lorax mashed up with Bob Ross. Then after a couple few lots of reworks it evolved into something more along the lines of my own unique style. Otherwise known as a “hybrid,” specifically in this instance it's black cottonwood + birch.

Although in retrospect now, I can see the Green Man made manifest, plus a hint of GOT Weirwood, my old hero Man-Thing and the titular being from When A Monster Calls. A major hat-tip to the classic "Old Man Willow" illustration for the 1978 Lord of the Rings calendar by the Brothers Hildebrandt (a seminal interpretation of Tolkein's characters which impacted me greatly as a young teenager), and Bakshi's Treebeard. And sure, yeah okay maybe there's just a wee touch of a “Tundra Gritty” too… not to mention I was rewatching “Midsommar” in the background while working on this piece. It's always fun to reverse engineer a concept and see the visual lineage, er, roots. 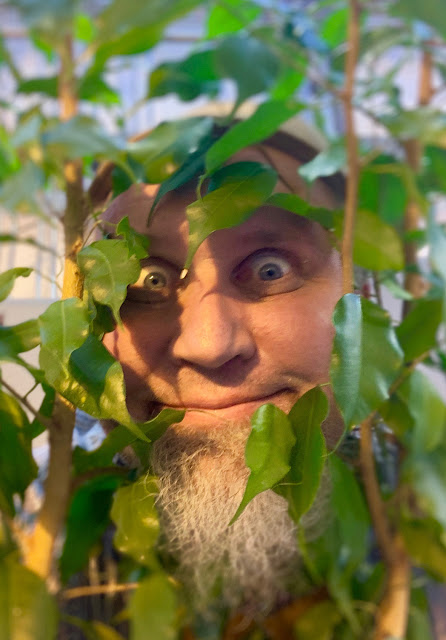 After dozens of process sketches it occurred to me how frustrating it really is for beginner drawers to not be able to draw what they see – although in many cases, such as this one, it’s completely uncharted and will take innumerable doodles to even start to realize the unseen idea. This is one instance where it wasn't seen as much as felt, and so began series of literally fleshing it out. That's the inner leap of faith when coaxing something into existence without any specific point of reference ie sketching an object or scene in the real world. 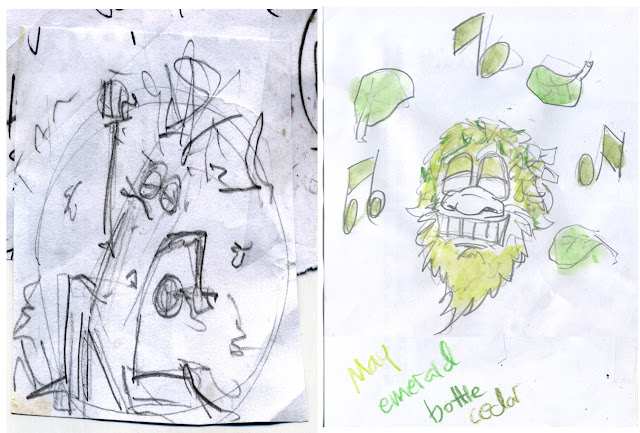 How many give up before the upteenth time attempting to make it visible – I remember a teacher of mine in grad school lecturing us about the only difference between us and him was that he was standing on a bigger mountain of mistakes, and could therefore see farther, and had a better view. Anyways I flailed around on this for quite a while before it eventually sluiced out from the mental pilings and gradually grew into a “real” character. 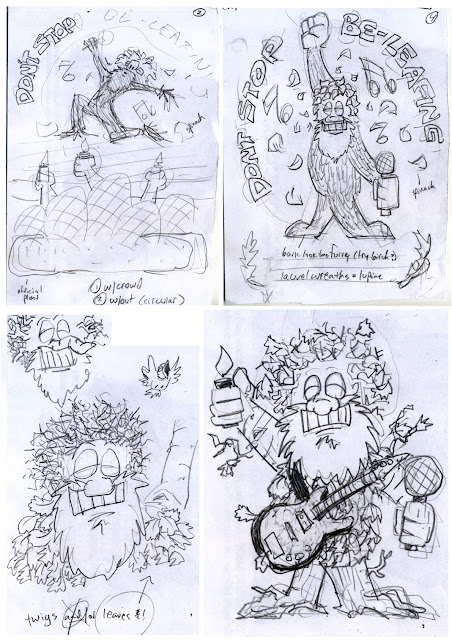 This project also marked a departure from my usual MO with clients: it’s usually a long process of intermediary steps as they get to monitor the process and aren’t surprised by an unexpected end result. It’s much more of a joint effort with ample opportunity for feedback and course correction, with tweaks and edits. This time I felt that they were in effect commissioning me more to do my own thing, as in a “Jamie” product. Always humbled by the trust and support, I gambled and after pitching the concept, went right ahead and essentially drew, typeset and colored a completed, finished version. 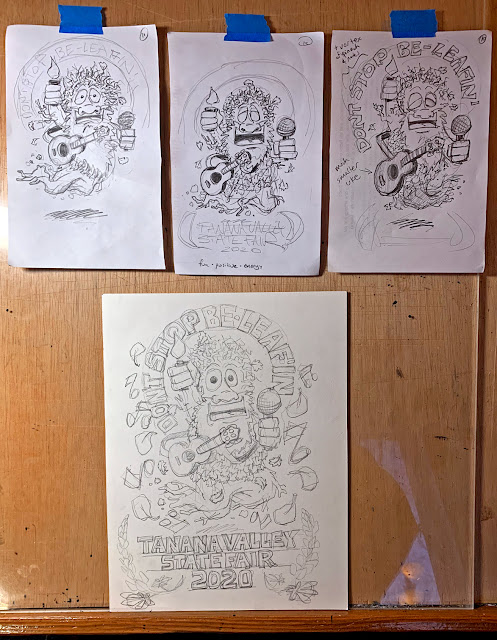 Well, turned out there was a bit of back-and-forth with a couple tweaks to the gesture: the lighter got nixed on account if sensitivity to courting controversy with potentially suggesting drug usage (obvious in retrospect), which in turn definitely negated drawing any classic and corny devil’s horns (awesome as it might have been). It was also pointed out to me that. duh, the actual performer on stage wouldn't be the one waving around a lighter. This is the sort of stuff I always tie back into teaching, and why it's so crucial to train up critiquing as a skill, and to always stay open to input + review - I missed some hilariously obvious errors in my time behind the easel. 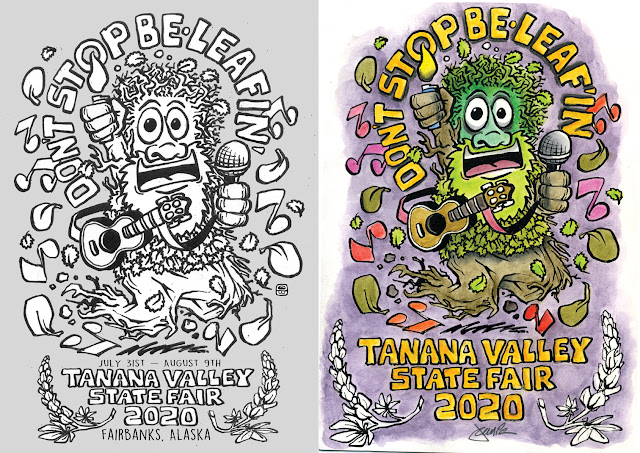 Another idea floated was to use a “shaka” sign, which I wasn’t even aware had a name, but is so indelibly associated with Hawaiian surfer culture might seem outta place on a uniquely local, Alaskan event. And I’m definitely soured on the thumbs-up sign for a while, so the universal gesture for “We’re #1” won out. If anything it now exudes even more positivity, if that’s even possible. So even though the dreaded critique-by-committee is often usually a sign of an inevitable face-palming struggle, this was instead surprisingly insightful, and some excellent changes occurred as a result of the feedback. 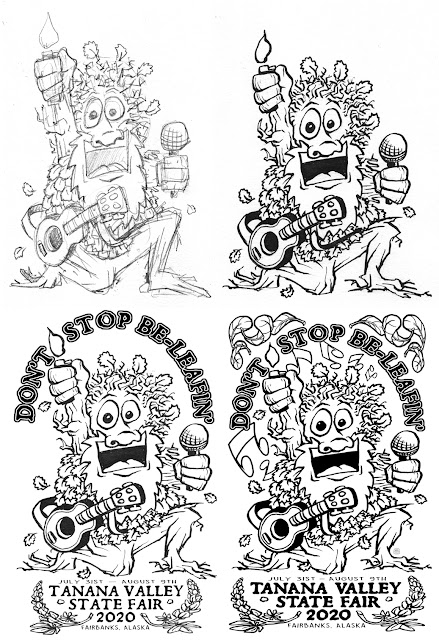 But behind the scenes, the edits did wind up setting me back on invested time, including a frustratingly amateur oversight when I discovered the anti-alias in Photoshop had been inadvertently triggered, something I failed to notice until the end of fine-combing (see the recent "Missed A Spot" post). So I ate another few hours (overall it took approximately a full day/24 hours total) and consequently wound up pulling an all-niter to redo everything (again). But boy talk about improving with practice, the third-time’s-the-charm actually worked – hate to say but while trying to catch up I ended up really making a tighter, cleaner piece by pushing myself to take chances. Kinda like a combination “work smarter not harder” + “fail forward faster” mantra. 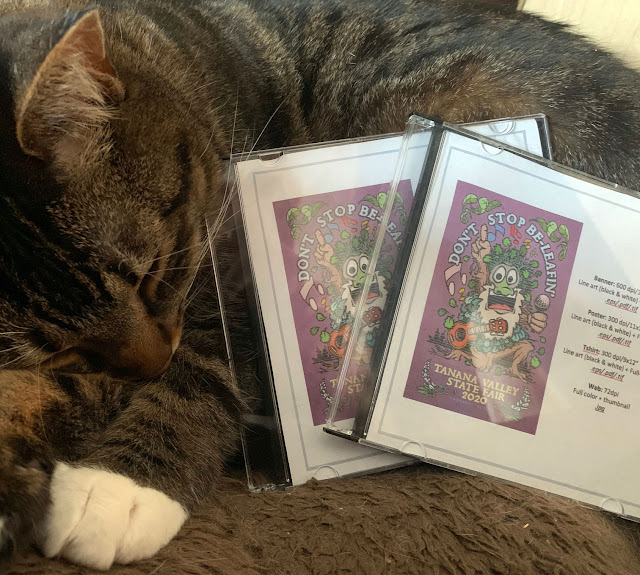 I honestly can say that this piece was by far the absolute funnest image I’ve worked on in quite some time – and that includes the regular cartoons. As in, there were a couple discreet moments I sat back and just smiled at myself over how silly it was. It was similar to the innate satisfaction felt while finishing up the recent “Hibernation” panel… both instances rare enough to notice amidst the usual ebb + flow of production. And working with such super nice folks was a bonus. 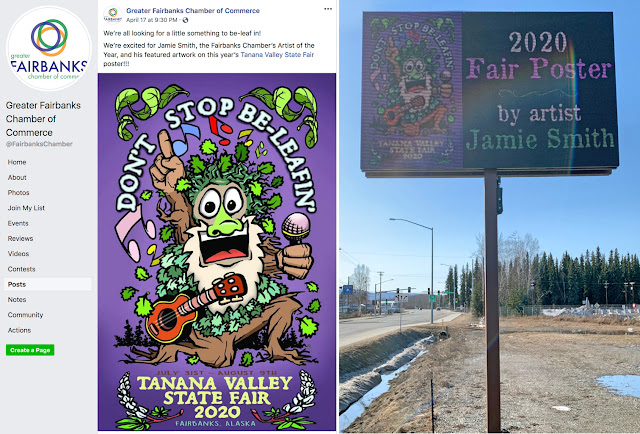 *I also want to add a interesting footnote on the previous design from last year, and the criticism it prompted which really got a lot of passionate debate (well, in most cases “debate” being epic trolling). Personally I immediately bifurcated into cognitive dissonance when confronted with two perspectives that at least initially I completely understood as both being valid (but not equal). Pleased to report my instinct is now confirmed that upon seeing a red flag over issues that I think that I know all about means I probably really need to sit down, shut up and maybe listen for a change.

I had friends with diametrically opposing positions on all sides of the ensuing fallout, not the least of which was having a fellow practitioner of cartooning be the creator of the artwork. Note here that all of the artists for the fair designs throughout its history are given their respective slogans by the folks at the fair, so it isn't the artist's concept at heart. For its 2019 poster the previous board inadvertently wound up portraying the infamous scene in “Gone With the Wind,” the now notoriously problematic movie.


”The Tanana Valley Fair recently unveiled its new poster for the 2019 fair. The poster, by cartoonist Chad Carpenter, is a recreation of the poster for the 1939 film, “Gone With the Wind” The poster substitutes cattle for the iconic Rhett Butler and Scarlett O’Hara. There are so many reasons why this image is inappropriate for the Tanana Valley Fair, and why the board of directors should immediately withdraw the poster and ask the cartoonist to go back to the drawing board. First, the film, “Gone With the Wind,” has been criticized for eight decades for its glorification of plantation slavery and for reproducing racialized stereotypes. Newspaper reports from 1940 document that African Americans were so outraged by the film’s representation of slavery and of black people that they organized protests of the film in major cities nationwide. They objected to the film’s representation of black slaves as passive, stupid, and happy, or conversely, to its portrayal of black men as violent rapists. The film casts the white supremacist group, the Ku Klux Klan, in a positive light. Did the Tanana Valley Fair board know this history when they selected this image for the 2019 fair?

Second, the original movie poster portrays the moment in the film just before Rhett rapes Scarlett. The poster for the movie shows a drunk Rhett Butler seizing Scarlett to carry her upstairs where he physically forces her to have sex. She protests vociferously, and expresses her terror. At one point, Rhett puts his hands around her neck to choke her. That is the moment when she submits. This marital rape scene in the film has been criticized for romanticizing sexual violence since at least the early 1970s in both the academic and the popular press. In fact, a simple google image search using the terms “rape AND Gone With the Wind” immediately brought up the 1939 movie poster. The poster for the Fair copies nearly all of the elements from the movie poster: the bull is wearing Rhett’s shirt, which he had drunkenly ripped open in preparation for raping Scarlett. The cow is wearing Scarlett’s red dress. The bull has seized the cow, who, just like the movie poster, does not have her arms around the bull. The difference between the movie poster and the Fair’s poster, however, is that the cow is shown as being in love with the bull who has just seized her. A further complication is the Fair’s 2019 theme, “Love is a Cattlefield,” in a play on the song popularized by Pat Benatar, “Love is a Battlefield.” What message is the Fair sending when it promotes love and romance as being about war? What message is being sent when sexual violence is romanticized with a big red heart?

Full disclosure: I am a longtime fan of Chad Carpenter’s work. I am hoping that he was unaware of the history of the film, “Gone With the Wind,” or the history of the poster for the movie when he submitted this image to the Tanana Valley Fair. I am hoping that the Fair board, when coming up with the theme, just was not thinking about the contemporary context of the #MeToo movement or the fact that Alaska has the highest rate of sexual and domestic violence in the nation. But ignorance of history cannot be used as an excuse. This image is inappropriate for the Tanana Valley Fair and should be immediately withdrawn.”

- Sine Anahita (letter to the editor of the News-Miner, April 1)

So it was certainly understandable that there was no small amount of trepidation going forward with a new design. Let's all raise our lighters to the enduring, illuminating spirit of perseverance.