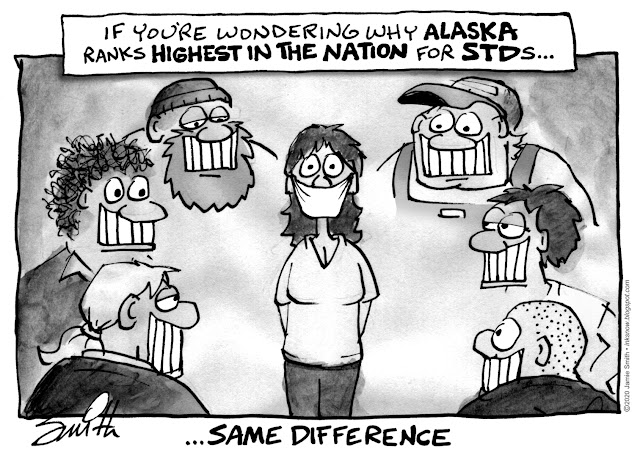 A visual illustrating the connection between the high rates of infection + transmission = refusal to not wear protection. Think of it as a Public Service Announcement and a reminder to take care and to take responsibility: wear protection.

There were a couple other variations sketched out of this theme, experimenting with different ways to make it more obvious. In the end I usually resist any temptation to dumb anything down, because it tends to be more engaging and rewarding to follow the visual breadcrumbs/connect the dots and “get it” without having it literally all spelled out for you. You will lose lotsa folks, but the tradeoff is a question of quality versus quantity. So I left the sole mask symmetrically placed + enhanced contrast to spotlight it (as also the encircling unmasked grins).


“The Center for Disease Prevention and Control (CDC) released a report outlining nationwide rates of sexually transmitted diseases across the country, and Alaska's rates remained at the top of the list.” - KTVA 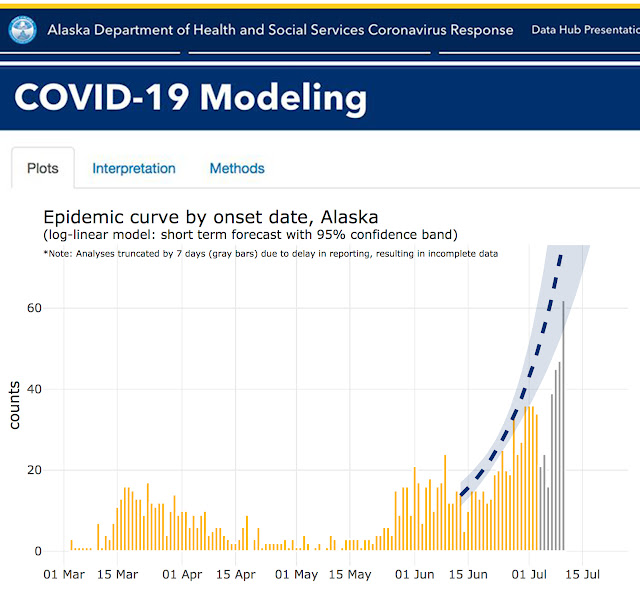 At the time of this post, Covid-19 rates are skyrocketing across the state of Alaska. This represents a failure of government across the board on account of the ignorance and incompetence of state and federal “leaders.” Fairbanks Borough Mayor Ward and City Mayor Matherly and rubberstamping administrators like Commissioner Crum. The complete failure to take even the barest of preventative measures and enact the simplest, most basic of safety mandates means that everything from here on out falls on them.
They own this. 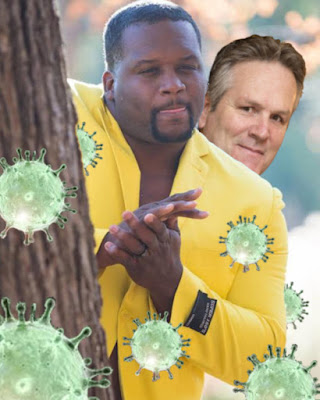 To give credit where credit is due, I admitted surprise at the relative transparency of the Dunleavy administration as far as openly publishing this data. Given other Republican governors who are also tRump acolytes manipulate statistics to make themselves look good or outright lying and stonewalling (and now this new corruption), the fact that ours is publicly accessible was kind of sort of impressive. But that’s still setting expectations far too low: the test and the time both came – and went – when they should have stepped up and done at the very least the absolute minimum possible efforts to re-flatten (mandating masks, not reopen schools, revert back to shutdown status for another eight weeks, freezing rent, basic income, among others). My guess is that the initial curve-flattening effort was just to buy some time and let the tundra thaw out a bit… makes for easier digging.


For the most part the Alaska state legislature and all Alaska Republicans are is now indelibly associated with the corruption and criminality of the federal level. Most Alaskans are peripherally, if not seasonally during spawning runs, aware of the truth behind the adage “the fish rots from the head down.”


We already knew EXACTLY how this administration would respond in a crisis of this magnitude. It was demonstrated for the world to see when both rolls of paper towels and insults were lobbed at Puerto Ricans. Even 9-11 revealed the sociopathic lack of empathy this shameless charlatan continues to display on a regular basis to this day. When another disaster happens, it will be handled the same way at both the federal and the state level: with weakness and incompetence.
Go ahead and scroll over a few months of posts on Dunleavy’s wall, and of Senator Sullivan and Representative Young’s too – not one single mention or message of sympathy or any heartfelt condolences about the fact that over one-hundred-thirty THOUSAND Americans have recently died. Crickets. Just send them money, and re-elect them. 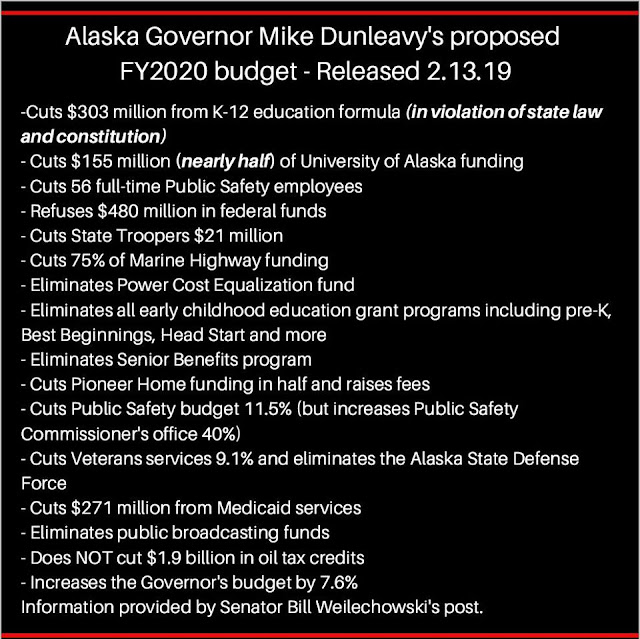 Similarly the Dunleavy administration along with Alaskan Republicans can now sit back and watch the pandemic do to our state what they previously only dreamed of accomplishing. The collapse of the petrodollar, ravaging wildfires and climate change, destruction of our educational system and implosion of our economy. Just wait until the pandemic spreads off the grid and into the Bush, as there is significant evidence the disease disproportionately affects vulnerable communities and minority populations.
Again, it’s on them. 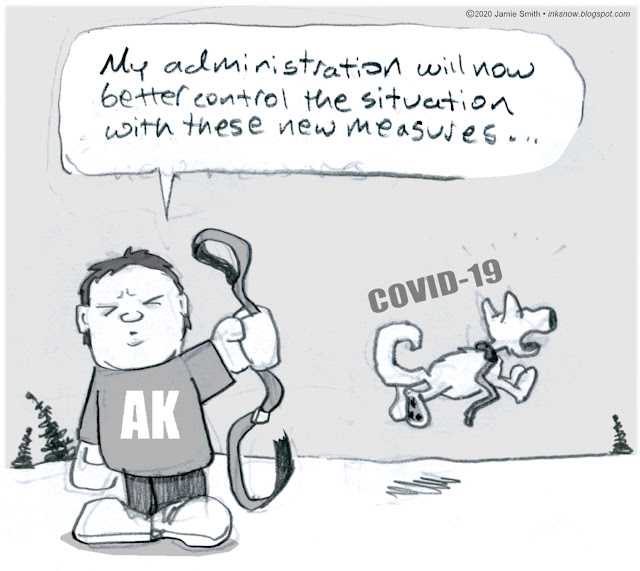 I'm originally from New York state, where so far an estimated 32,019 people have died from the pandemic. In comparison, the entire population of the city of Fairbanks is 31,516. It puts the wholesale loss into sobering perspective while driving around town and you envision everybody dead, just gone. That’s the scale of the numbers I think of whenever hearing folks start to prevaricate and brush off the rising figures by citing their supposed relative statistical insignificance. Yes, we’re well aware that we all must die some day. In fact that reminds me that each moment is precious, and we shouldn’t waste time coddling fools. 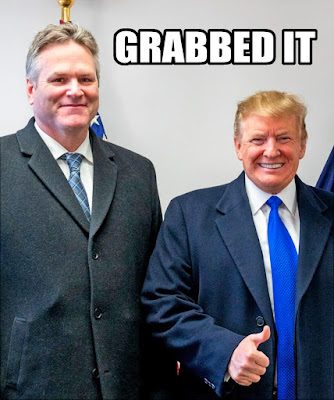 More than a little ironic, and kinda sad, to see how now all bets are off when it comes to decency and civility – nevermind rational discourse - because Republicans, conservatives, hypocritical evangelicals etc. have consistently given it a pass from the start of this administration. They’ve abandoned any pretense of principle through their tacit approval, open endorsement and craven emulation of this behavior, and have now lost any claim to the high ground in ethics or morality. tRump represents the Republican party through-and-through, as in turn, Dunleavy and his Alaskan Republican party rubber-stamping cheerleaders serve as ciphers and sycophants.
They own this. 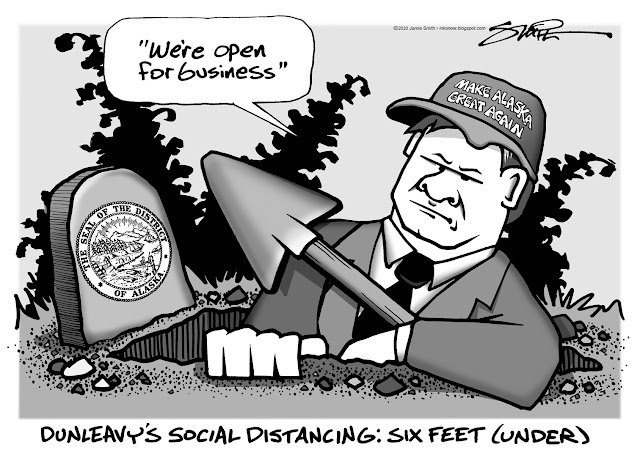