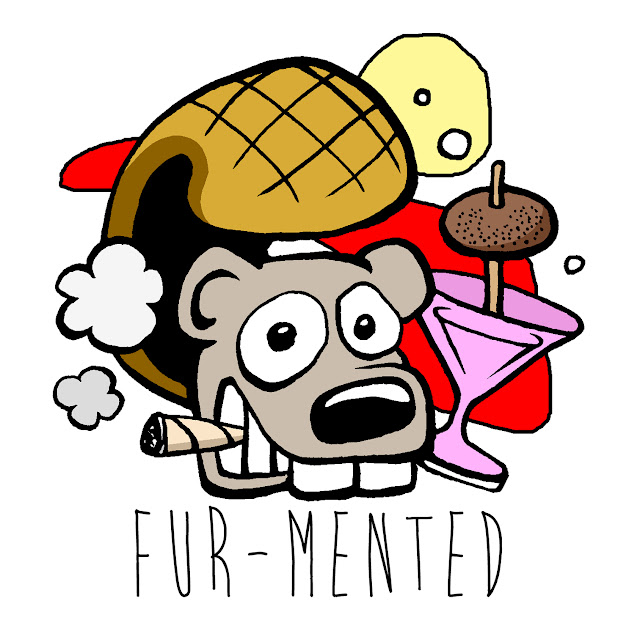 For the fourth year in a row now (see previous posts 2016, 2017 and 2018 + the official event page here) my local libation location Ursa Major Distilling is hosting my annual cartoon retrospective. There's a little homage to the very first show in this year's logo, as seen in this sampler video:


For this year seventy panels will be up on the walls, and the opening will be from 5pm to 8pm tonight. And of course it will remain on display the remainder of January, as a perfect backdrop to sampling refreshing beverages.
(more below the fold)


I'll spend a little bit more time here with this post on some of the behind-the-scenes nuts-and-bolts work that went into the gig. I covered it a bit last year, but it's a process and a crucial point that bears constant repeating in my classroom, especially with art majors who are looking at putting on what for many is their very first exhibition. It isn't about just advertising the opening itself, but a meta-manual on the behind-the-scenes marketing and promotion that goes on for any successful show. 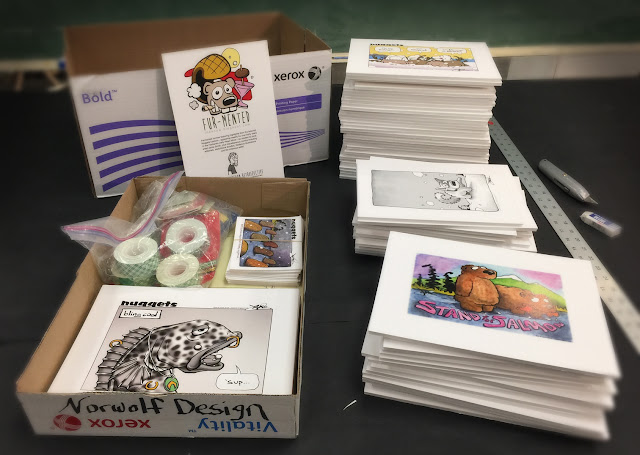 Laying down a foundation started many months ago with the initial cut of selected works that had all run in the newspaper. After reformatting for consistency, one massive PDF file was compiled and uploaded: once again Date-Line Digital Printing handled the 8x10's on glossy cardstock (about a quarter of which were in full-color). These were then spray-mounted onto various sizes of foamcore scraps, and affixed with double-sided mounting squares on the corners. Ta-daaa.


Over a month beforehand I stated working various venues around town: kinda like campaigning it quite often comes down to that personal touch - pressing flesh and connecting a face to the name. A catchy and/or amusing title + logo can also help with the whole "branding" thing. Besides my usual haunts like cafes and bars, I made sure to hit all the galleries for the preceding month's First Fridays, and also all of the annual holiday markets and gift bazaars.


All told I handed out several hundred of these little four-up fliers - double-sided with the date + description on the back (as seen on the larger-sized posters below) that were cut into quarters.  This requires that the artist gets themselves out there and actually beat the street: the time-honored tradition of pounding the pavement to network with any and all possible, potentially receptive audiences. You need to first planting these seeds in order for watering later on - the gradual ramping up of reminders that will start to pop up around town and across various media platforms.


Too many artists expect the hosting venue (ie gallery) to do all the work, which in theory would justifies the institution taking at least 50% of the profits from an artist's work. Sadly that is just not the case, and few go beyond the absolute bare minimum - that's both the creators and the venues. At the other extreme, all this is exactly what you'd pay an agent for, so as to stay focused on making more work back at the studio, similar to a what a bookkeeper does for many an artist.


Which for some can be a real boon, since many artists shy away from stepping up to the plate and doing the necessary footwork - maybe they're awkward or uncomfortable with self-promotion, or are unaware of exactly what to do. I credit all those years spent as a waiter helping train me with the audacity of walking up to a bunch of utter strangers and peddle my wares like it's the daily special.


Which it is. The "On sale now - everything must go" MO is anathema to many artsy-fartsy types that react in horror with commercialization and commodification like it taints the purity of their vision. Hey, good for them, as it's less competition for me. Now that attitude of course runs counter to the prevailing Hallmark platitudes that artists aren't supposed to be in competition with each other. And sure, support can be a vital part of the picture - community is incredibly important - but for some of us it's not just a hobby or a lifestyle, it's a job.


A few important caveats are in order here:

First: You don't ever need to feel pressured into marketing - or even showing - your work to be a successful artist. Like I frequently remind my own students, there's as many different reasons to make art as there are to ways to make it, and more often then not it's a continually sliding scale or mixture of motivations and inspirations behind creation. And so over the years I've been privy to the humbling realization that there will always be far better, more talented folks out there - they just don't make art for the purpose of making money or attracting attention. Absolutely nothing wrong with that at all. All that being said, keep in mind that as an artist you are also offering something totally unique that nobody else can do and that exists nowhere else until you made it. That ought to be reflected in your prices.

Second: Especially in a small town there's always the risk of overexposure, and so I consciously limit shows, or at least pace out the publicized hullabaloo. But hey, we are now living in the so-called "attention economy" and thus you are vying for eyeballs and competing for time, the most precious resource of all. I always remember that it's something to never, ever take for granted, and try not to abuse the rare privilege that's afforded artists in society.
And yeah, I frequently screw that up, leading to a final point...

Third: This is more of a general point but important not to lose sight of when caught up in the whirlwind. Sometimes I forget to pay better attention and listen more, as was the recent case after poking fun at someone making a total jerk outta myself (again). A combination of factors, like slipping into "classroom critique lecture mode," plus viewing everything at an annoyingly reactionary commercial angle, made for a thoroughly botched gesture of support that went horribly wrong. In retrospect, sometimes other artists who are way more talented than I'll ever hope to be can easily trigger the nefarious impostor syndrome (also see the closely related "asshole theory"). It ain't so much psychoanalyzing as sometimes maybe just shutting the hell up,  Thus endeth the lesson.


In the days leading up to launch it's a window to start cracking open wider and wider and start letting out delectable scents of what you've been cooking up in that creative kitchen for so long. With regularly scheduled posts on an event page you keep up a constant flow of on-line imagery that isn't blatant or cheesy advertising.

If you're going to be obtrusive you should at least be amusing or even educational. I liken it to "chum in the water" and it's been a really successful approach to take over the many years I've been effectively pimping myself out. Case in point being every single image posted here was also used elsewhere either on-line and/or in meatspace. Think of them as breadcrumbs...


Follow up the event with other opportunities to network and promote your work: far too many artists walk away after the opening, and only return to the venue when it's time to take it all down. In the meantime, in-between those two bookended dates, it's just sitting there, like a lifeless trophy. It ain't gonna sell itself, especially considering how the vast, overwhelming number of people out there don't even ever go to galleries.


So give 'em all an excuse... it's a rare opportunity to take advantage of what's basically a big-ass display for you and your work, so use it. Have a "reopening," a "3rd Thursday," throw a "closing," put on some workshops, reach out to classes for field-trips, groups and organizations that might have an interest in you, your work, and even the specific content of some pieces. An example would be if, say, you have a bunch of dog-related panels: then maybe pitch a private show + tell to dog rescuers, animal shelters, trainers, veterinarians, breeders, pet stores etc. As an added bonus do some demos - not just at the extracurricular gigs but show up completely unannounced  + unexpected and do some pieces on-site as a variation on the "pop-up." Again, think of it like a musician who does a surprise unplugged, acoustic set - or busking on the premises of your own show.


The peripheral project that is being spotlit at this year's retrospect (like "Noosance Moosance" and "The Big Picture"and various 24 Hour Comics over the years) is primarily the new Baked Alaska feature, which there will be an opportunity to sign up subscribers and see sample issues on-site. Also there will be the usual section devoted to Illustrations (highlighting clients such as Opera Fairbanks and Parks Highway Towing), and the usual areas for Edits and Editorials as well.


Aside from having a good time, making people laugh, and meeting new folks in person, a focal point of the opening is as always the sale of original artwork. This is analogous to bands playing a gig - superfans will buy the new CD and pick up some gear like tshirts. And as always I make an effort to stagger items as far as different tiers of pricing: from big-ticket originals for hundreds of dollars, mid-range books + tshirts for $10-$25, all the way down to a few bucks each for prints or stickers + free samples.


I'm also testing out a few new items, and incidentally new prices as well, for both freelance rates and original works. To these ends I have plenty more handouts (more on these "mini-portfolios" in an upcoming post) available on-site that promote possibilities for future clients.


Last but not least is how this is an excellent time + place to test market some schwag, like for the fur-st time ever, stickers. Given my propensity on collecting them to adorn my sketchbooks over the years it's kind of amazing I've gone this long without getting some of my own made. If they are well received then maybe I think it might just be yet another lucrative venue to explore....


Also my old place of employment as a graphic artist (and a few years of pulling the squeegee) recently got bought out by another long-time local business, Great Alaska Shirt Company. They have the first direct-to-garment printer in town, and I'm super excited to see how my work will look using this new technology.


I think it could make for fantastic short-run event-based promotional gear, that bypasses any need for maintaining stock, and could open up possibilities for taking orders either at the gigs or on-line limited-editions. Hmmm... we might be seeing some official Ink & Snow®™ brand gear sooner than later...

Update: Another outstanding effort on the part of Rose Hip Press will see the fruition of a limited edition calendar available for order! 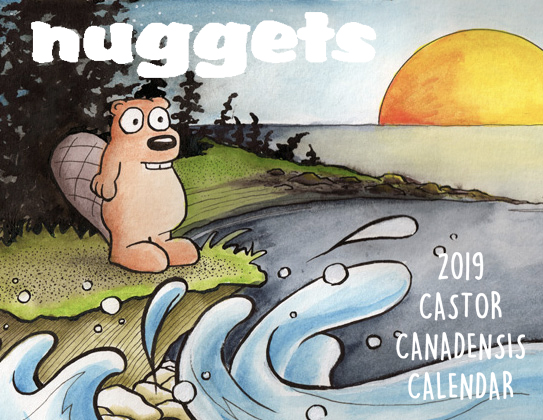 When the prototype proof copy is printed I'll post some more info, but one of my publishers has been working overtime on formatting this project, and I've been rebooting new full-color variants on some classic panels: see if you can guess what the theme for the first one is...


Here's a link to the official event page on Facebook, and if you can't make it to the opening itself, I'll keep you posted on other upcoming events and opportunities as they unfold - plus there will be a brief recap when all is said and done. Thanks for reading, and good luck with your own gig! 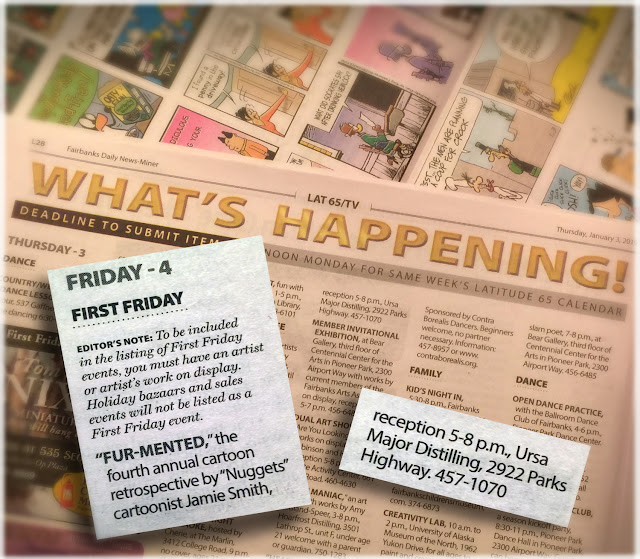