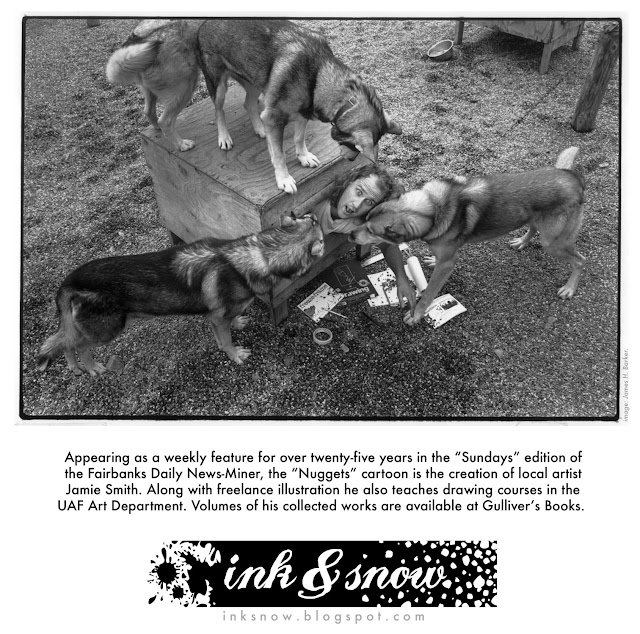 Here's a brief overview of the behind-the-scenes process in putting up the show... having done it already a year before at the same venue it was a bit more, uh, hang-loose attitude + non-stressful approach. But no matter how much experience one has in putting on a gig like this there's usually some degree of trepidation, and the unexpected always occurs.

Quick + Dirty: White Trash Exhibition Method®™meant not having to worry overmuch about framing and matting the pieces - a good thing since there were approximately one-hundred panels. So going for display-only presentation and non-archival materials meant for a comparatively easy - aside from one major glitch - setup. 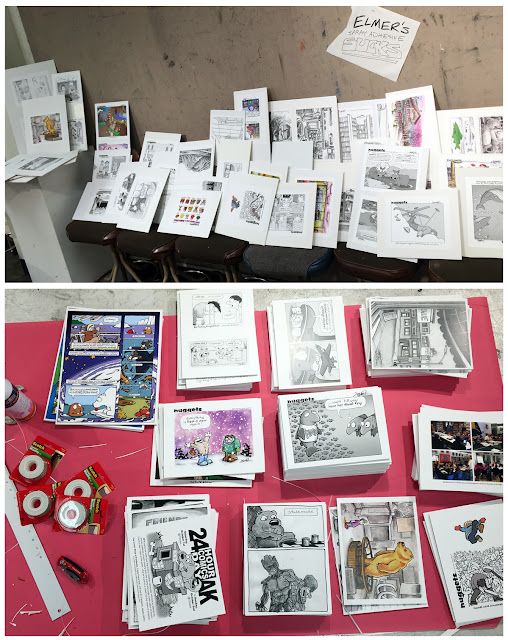 After selecting the list of images and then compiling all the resized files into one massive PDF for printing (hat-tip to Date-Line Digital Printing as always for making me look good) I initially estimated needing at least ten sheets of foam core for mounting them: 40x60" each at $12 per. As it happened I scored on more than enough scraps from the framing department to do the job - a huge bag for the grand total of seven bucks.

After last year's experience with the panels occasionally popping off the wall when the distillery fermentation cycle jacked up the humidity, we opted for using double-sided mounting squares versus the usual user-friendly mounting. Made for a more irreversible commitment on hanging, and removal will no doubt entail some repainting after picking off the tape, but well worth it in the end for peace of mind a more durable presentation. 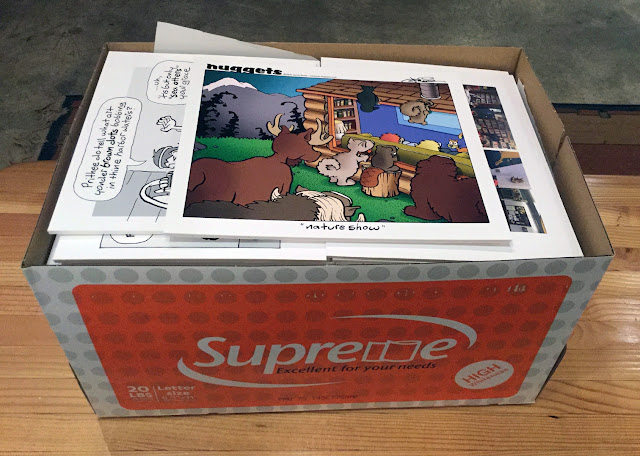 Not too many artists that can have almost a hundred pieces in a show, much less have them all fit in one box! After approximately six hours of prep time everything was ready to stick on the wall. There was one speed-bump thrown up in how I unfortunately picked up Elmer's brand spray adhesive: a decidedly inferior product with weak sticking power. Insanely frustrating to have corners spontaneously lift up after carefully affixing the prints onto the foamcore, which necessitated peeling it off and respraying it again. A royal pain. in. the. ass. Note to self: in the future stick with (no pun intended) 3M brand and never, NEVER use Elmers!

Also worth mentioning how important it is when doing such a project as this to have a big, well-lit and well-ventilated space to assemble the work (I utilized the classroom after-hours). Extra blades for the utility knife are an absolute must for frequently changing out along with the backing cutting board at the first sign of dullness so as to avoid any rough cuts. After spray-mounting the prints onto the foamcore and leaving enough time for the adhesive to set (in theory... grrr), I trimmed them up using a straight edge - eyeballing the cuts which is probably not recommended, but I had an extra set of prints for backup in case of any tragedy. A clean eraser + xtra fine grit sandpaper for touch-ups and the show was ready to hit the road. 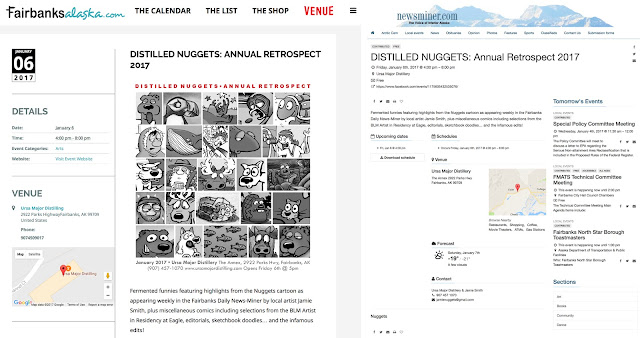 In tangent with the physical preparation was a wave of promotion: nowhere near the degree of my usual media onslaught, but a few press releases and fliers posted around town (bulletin boards around campus, cafes, bookstores, post office and miscellaneous stores), and postings on social media sites and on-line event calendars, especially an official Facebook event page with continually updating teaser images and excerpts and links to backposts.


And don't forget the hosting venue - providing them with all the fixin's is an indispensable aide for marketing the event. They created a special libation in honor of the exhibit: the "Ester Caucasian" - an absolutely scrumptious variation on the classic White Russian crafted with homemade coffee liqueur + vodka + heavy cream.


The next phase was actually putting the pieces up on the wall, which took maybe a couple of hours. It's the only time I ever get to use the ol' "ask me how's it hanging" line. Working with the unique layout of the structure presents all kinds of design opportunities, which call for impromptu tweaking, even editing of the material.


I pretty much ignored all the rules as far as ideal height of the pieces, but knowing that the fine print of some of the panels would be an issue for anybody under six-feet in height without good vision (lighting was for the most part adequate). Adapting to the limitations of the particular space is sometimes as much of a creative challenge as the work itself, oftentimes calling for artistic interpretation and changes made on the fly. And again I eyeballed hanging the panels, trusting in my  instinct for level and evenly spaced pieces - though having another critical opinion on hand is also a good idea ("nope.. higher... little more to the left" etc.).


An hour before opening I set up a small section for peddling wares, opting to leave the folding table and accompanying display materials in storage. As per the usual MO I offered a range of goods ranging in price from free (samples) to economical (cards, books + closeout tshirts) to originals, which were themselves tiered at different levels according to their degree of relative completeness (is line art, wash or color).


And in keeping with the venue, a note on my similarly  non-traditional approach to selling the works on display: for many years I've operated on a model that many bands do with their songs and albums: pay what you want to. Just as when people contact me for a copy of whatever cartoon that ran in the paper that they are interested in having a copy of, I adopt the same MO with shows like this. The pieces themselves, intended for display-only (basically a big ad for me) are admittedly not worth that much, since they are cut to weird sizes, are not archival, and everybody knows that a color laser print only costs like a buck down at the locally-owned/independent digital copy store.


This approach hinges on there being a cumulative result that will make everything (financially) worthwhile, especially the time it took putting on the show including materials. So far it's been a gamble that's payed off: I simply run a tab and have interested parties tip whatever they want for either the work on the wall and/or one of a duplicate set of prints kept on-site (made as an insurance against any mistakes made during the mounting). The premise isn't so much guilt-tripping, it's more like recognizing that for some people five bucks is like fifty or even five-hundred to someone else. Additionally in this way the establishment also sees some (potentially a lot of) money, since there wasn't any of the traditional 50% cut in sales involved here. Everybody's happy.

The general layout of the room followed a visual rhythm that roughly followed a loose pattern that depended on the particular section/within each partition synchronized with similar content. In other words, all the usual Nuggets were in one place, the sketches in another, and so on with the edits, the editorials, highlighted excerpts from the Eagle residency, the Fairbanks Sketchers stuff and the longer works like last year's 24-Hour comic and "The Big Picture/It's The little Things."

Just add people: all that was left was waiting for folks to show up, and boy did they ever... unexpectedly fantastic turnout, especially given the number of other equally fine establishments having openings around the Interior. And more than a few people traveled a relatively long way after a Friday at work, which is humbling. Seeing old friends and fans along with meeting lots of new people too makes for a really wonderful time. You'll notice a preponderance of heavy winter gear in the audience, it was -25° F, which is evidence that life goes on in the North regardless of conditions. Made enough in sales to cover the cost of materials and then some profit afterwards, which always a bonus. And as always, the real reward comes in just simply hanging out enjoying a libation in good company with art on the walls. 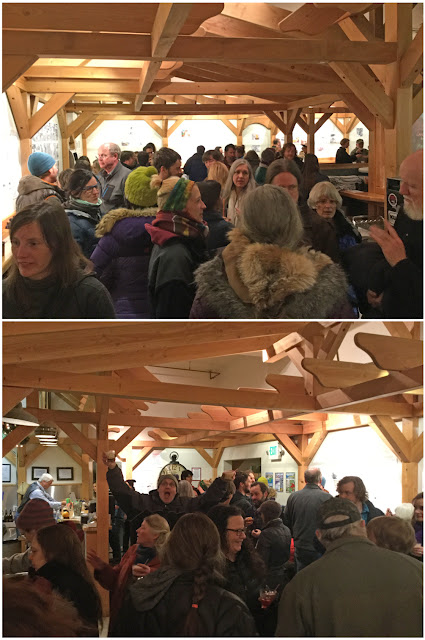