This marked the fifth year I was invited to teach cartooning at the University of Alaska Fairbanks' Visual Art Academy. I opted for only part-time, so just two classes starting at 8:30am of 6-12th graders: eight in one class and sixteen in the other. Not only is it an invaluable, lifelong lesson in the camaraderie of comics creators, but we are bonded by the common drive to spend what little of the short season in beautiful summer days is afforded to us in the Interior of Alaska indoors drawing. I think I'm also the only instructor that assigns them homework: best quote of the year "Hey... this is just like school."


Once again it took the tone of a boot camp with full-on immersion in techniques and generating material for character design, single-panel gags, comic strips, one-pagers, collaborative pages + comics and their own minimum 3-page piece published in the class comic book.
Check out other backposts from the archive: a couple from 2013 here and here, 2014, 2015, and 2016 for more recaps + samples of student work. 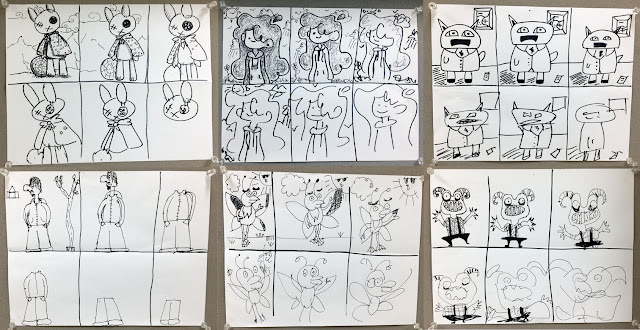 After the students arm themselves with pencils, erasers, ballpoint pens and various thicknesses of Sharpies, we start in on warm-ups to get the creative juices flowing. In this timed exercise we have six panels on a letter-sized sheet of paper, and ink up a character first in five minutes, then two, then one, then thirty seconds, fifteen seconds and lastly five seconds.  Somewhere along this continuum we discover the balance between lavishing detail on a drawing versus the logistics of having to redraw a character hundreds if not thousands of times under the pressure of deadlines.

Another timed exercise that also incorporates teamwork is the venerable "Think Before You Ink" drill. Still amazed after all these years how someone can knock out a rendering of fairly complex scenarios in sixty seconds.

There's also one that I really like to use along with gag charts to help come up with ideas where everybody has ten seconds to react to prompts and write captions (ex: write something you overheard this morning"), then sixty seconds to illustrate another series from another list of different prompts (ex: "draw something you saw in a dream"), and then rearrange the cards to see what kind of random juxtapositions can trigger inspiration. 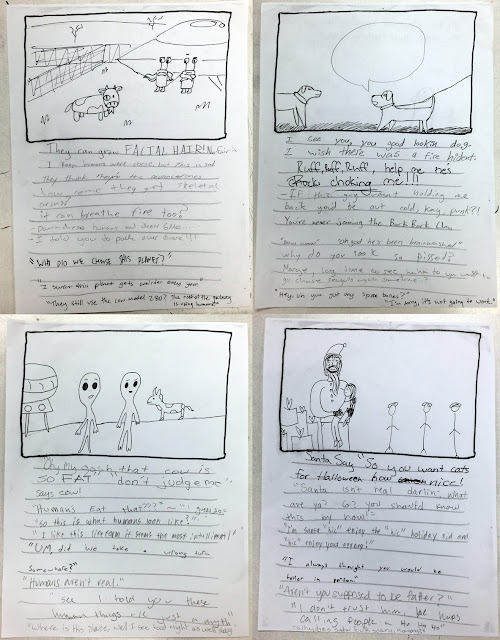 Interspersed with all the daily exercises I like to drop the occasional jam, either captions for a single-panel gag, or strips, or even the exquisite corpse. These jams are such a great way to unblock and free up the flow of ideas.


They are also really fun to do with friends and can be a way to foment some funny feelings, and serve as a reminder that inspiration is all around us and ideas can be gotten from absolutely anything. 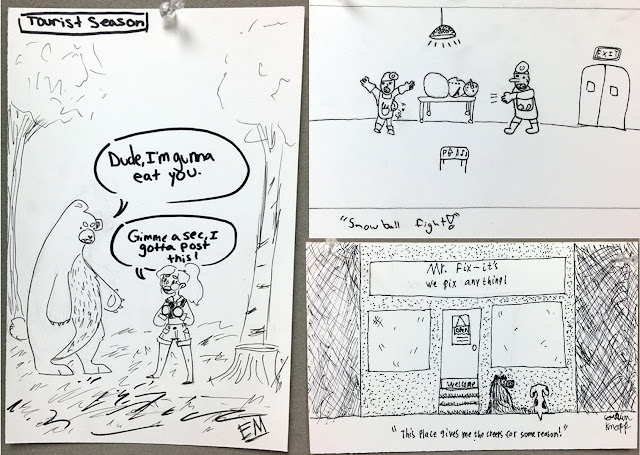 Eventually we all graduate to drawing finished panels on Bristol board, a minimum of two from everybody. By this point there's a huge repository (or mulch-pile) of material from which to literally draw from. It's accumulated on the walls of the classroom, out in the hallway showcases and in their storage drawers and sketchbooks. 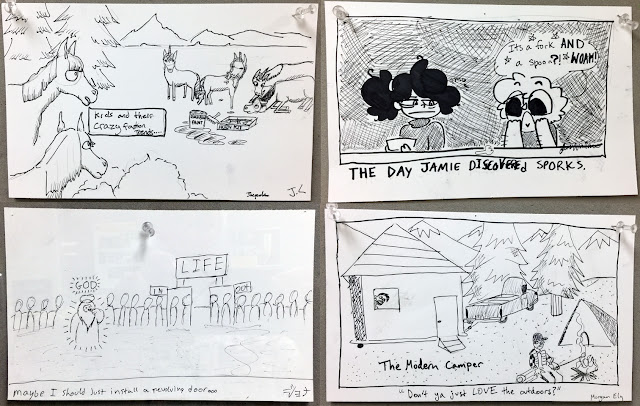 Personally I'm continually astonished at what happens when they are left alone to come up with whatever they want to do. All it takes sometimes is a little push, and then providing the time + place to run with their own imagination.

One-pagers are next, and as a sort of prompt we do a round of a "Start to Finish" exercise to grease the proverbial skids. Students are given two random images and are tasked with creating a four-panel page that starts with one and ends with the other. This can be a challenge when it's, say, clowns and astronauts, planets in outer space and asylum residents, or dinosaurs and hamburgers.
I think of these one-pagers in terms of two-tiered Sunday funnies as a way to transition from strips into longer narratives. 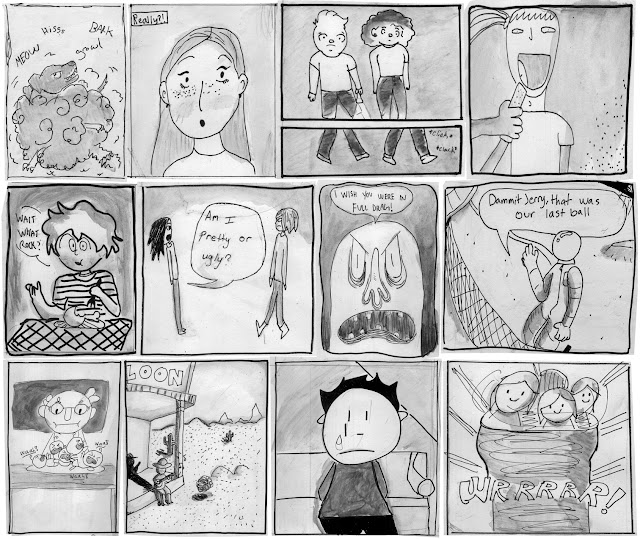 Here's a set of sample swatches excerpted from the next phase in cartoon boot camp: the collaborative page. But instead of the normal three-day long exercise, it's compressed into a single session: student #1 has fifteen minutes to write up a simple script (3-5 panels) for a one-page piece; student #2 then pencils the page (11x17") in thirty minutes; #3 inks it p in half an hour; #4 has the same amount of time to add value (graphite or wash). It's intense and rewarding! 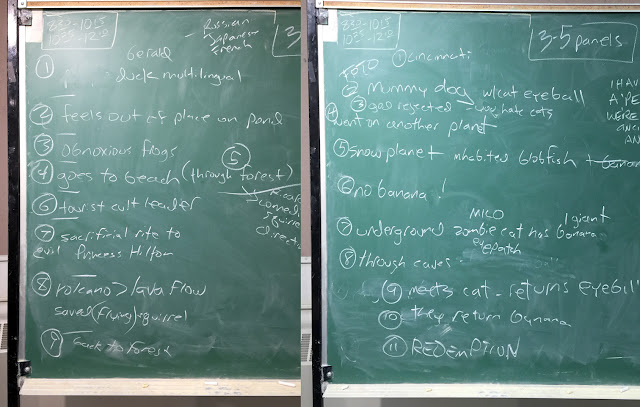 The next day we all worked up a class comic book: everybody assembled in front of the huge blackboard and collectively brainstormed what quickly evolved into a fantastically convoluted tale. It gave us a chance to explore basic plot structures and simple story arcs, before knuckling down and cranking out another one-page piece in about an hour.

There were as many pages to the comic as there were students in the class (ten for the first, and twelve for the second) plus a cover, one of which was penciled by special guest artist (and incidentally the dean of the college) Todd Sherman, and inked/lettered by me, the other by a couple of the advanced students who took time out from working on their own independent projects.

This was a new exercise for me, inspired by the visiting artist Maria Franz who turned me onto this delightful group exercise. It's collaborative in that the first and last panels of each student's page has to dovetail with both the preceding and the following student's pages, so there is a lot of interaction and plotting. And even though one primary student is responsible for character designs of each character (and setting) that appears, other students follow their lead but put their own stylistic spin on everything, so there are some great takes on the material as the pages unfold and evolve throughout the process. 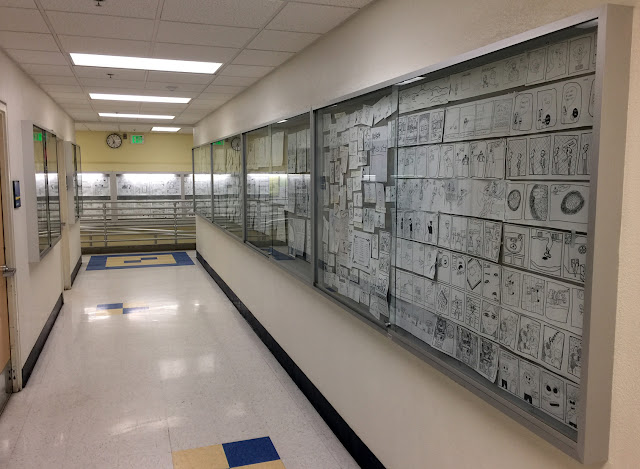 Gradually the output from the cartooning classes metastasized throughout the department, occupying about a third of the hallway display cases. This wasn't just to humblebrag showcase the tremendous amount of work we accomplished in just a couple short weeks (not to mention in only one-hour forty-minute sessions per day), but to provide the buffet of ideas from which to literally draw from. No excuses ("I don't know what to draw" etc.) as there were any number of possibilities - a whole freakin' wall in fact - to pick up on and re-purpose into their own stories.


Ostensibly the grande summation of the entire experience is encapsulated with the end product: the official comic book containing everybody's final pages (1-3 pages). I like to think that it's also the overall immersion and exposure to so many varied approaches to creating comics. I almost hope that they are left somehow unsatisfied and yet maintain enough momentum to keep on making more and more. Works for me.

This year I had a couple bonus "advanced" (one repeat attender and another taking both sessions of cartooning for half the day) students who I tasked with creating their own minimum 4-page comic. They, along with a few other folks hidden away among the class, really really surprised me with the quality of their work - there's always some serious surprises in store for me when I discover the depth of talent and passion just waiting to uncap. 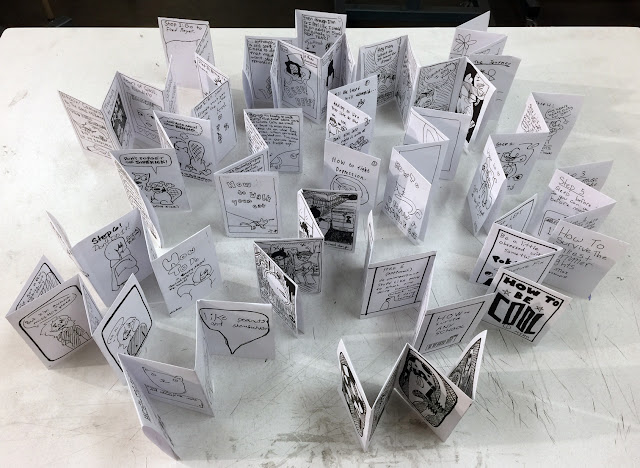 Everybody also got a photocopied set of the collaborative pages and also the group comic, so together with all the leftovers from innumerable in-class exercises, there was quite the haul. Of course this was all a cartoon carrot at the end of the proverbial stick: they only got the goodies after completing one final project on the very last day... a minicomic that was copied + traded with everyone. That and taking down all the artwork festooning the department! 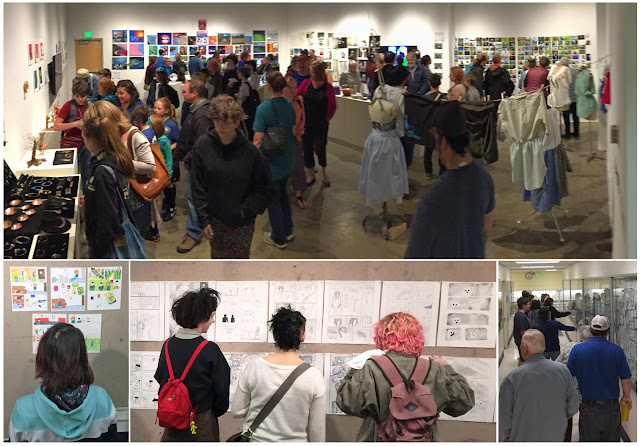 The opening was amazing: great turnout of folks plus a chance to meet with friends + family of the students, and watch them proudly show off all the work that they've done. But for me personally the very best moment was in catching a cartoonist who just couldn't resist making one. more. little. touch-up on their piece...