Last weekend saw a large flock of birds-of-a-feather gather outside to celebrate part of what makes Fairbanks a great place to live: The Friends of Creamer's Field with the support of Design Alaska hosted a 50-year anniversary "Cows, Cranes and Conservation" and it was a fabulous event.

Creamer's Field Migratory Waterfowl Refuge is such a special place that's nested inside the city. Besides solo gigs,  and special events, I always make a point to usher my drawing students out on field trips to sketch various aspects of the place, as there are endless opportunities to gather reference material or simply sit and enjoy artistic observations. 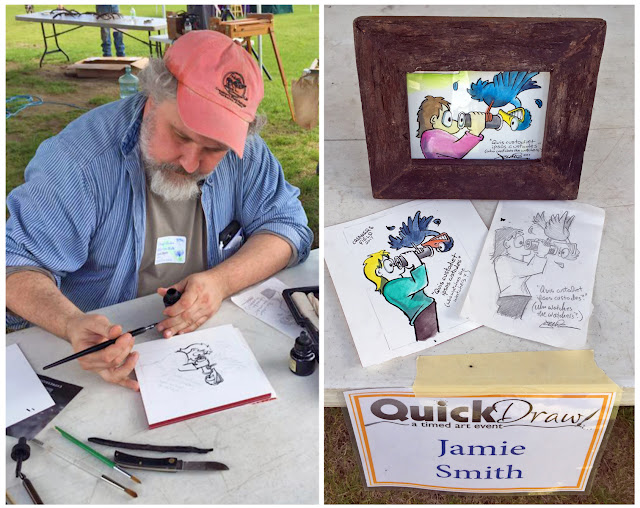 This was the fifth time attending the Wild Arts Walk for me (see backposts for 2015, 2014, 2013 here and here, and 2009), and the fourth time as a participant in the Quick Draw challenge. The logistics necessitated setting up a table out on the trail early, and bailing for the requisite time spent under the big-top by the visitor's center for an assembled crowd of observers. Some of the cream of the crop of Interior artists were on hand (Todd Sherman, Carol Wilbur, Randall Compton, Vladimir Zhikhartsev, Scott Hansen and many other species represented a diverse range of styles) to bang out a piece for auction in one hour + 15-minutes of framing.

Working from a fresh doodle, my concept literally illustrated the concept of "Quis custodiet ipsos custodes?" which aside from the Latin, injected a little bit of a political statement. Given the unfair advantage a cartoonist has over other mediums, I had the relative luxury of enough time to rework a second piece as a horizontal composition (much better looking in my opinion), trading off between the two so as to facilitate drying time between the inking and the wash application. This panel - done in pen + ink w/watercolor - for once won't be appearing in the regular newspaper feature to make it a bit more unique as an original collectable. Not to mention the value-added cost of a $32 dollar frame (minus a 40% off coupon) hastily purchased that same morning right before the gig. 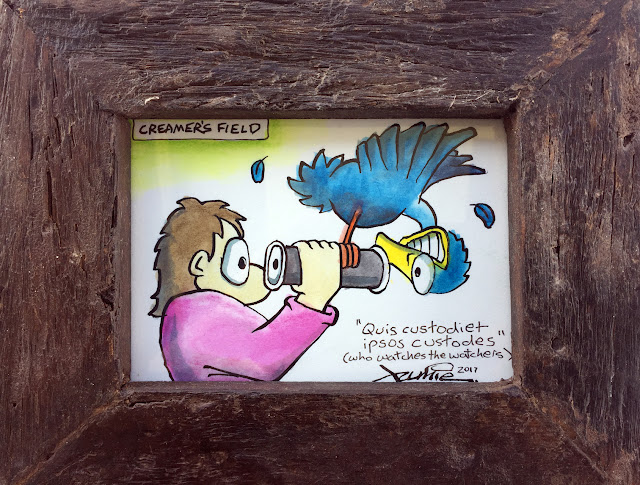 Performing under the watchful eye of a crowd as they circled about seeing the artists complete their respective works adds to the mounting tension + drama, which might be uncomfortable to some (on both sides of the table) but as there were several other educators at the event it's something you eventually get inured to - if not perversely inspired by. In the end we raised some money, maybe even making a little on the side as well, and had some serious fun, all for a good cause.


HUGE thanks to the volunteers who hosted + set up/broke down everything for the artists… so much unsung energy behind the scenes goes into pulling off this event. Met many visitors to the area and made new acquaintances along the way as well: always great to see all the folks, friends & fans turn out on the trails... thanks to all for supporting for this wonderful community resource.