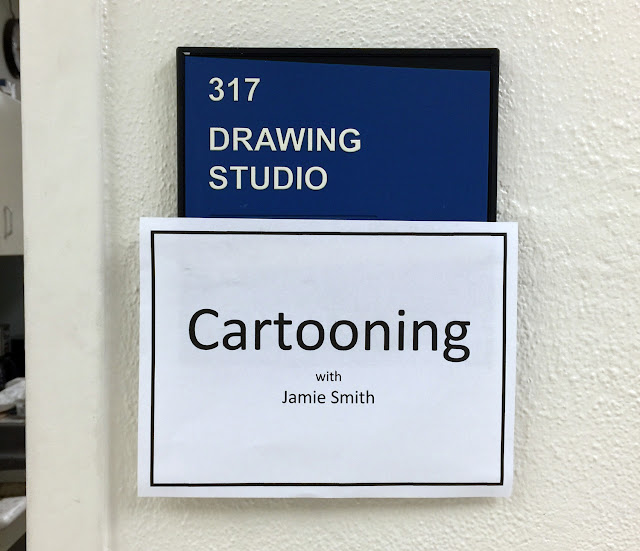 Sadly because of the plague sweeping the country the 2020 Visual Art Academy was canceled – it would have been the sixth I’ve taught cartooning for (two morning classes). Beyond the disruption to routine the social distancing hit teachers pretty hard, as I found myself really missing the annual experience. On the other hand, it was an opportunity to get a little distance and reevaluate participation in such events. Not to mention continuing to recap these gigs as it’s approaching the broken wheel stage of blogging – aside from the usual refining tweaks, reshuffling of exercises and testing out the occasional new activity, I’m really just repeating myself. Fortunately the students and their work will always entice me to continue, and their energy + enthusiasm never fails to come full circle and inspire me back in my own studio.

*Join me after the jump for a condensed recap from last year’s gig… especially seeing as how I never got around to posting any samples from 2019! 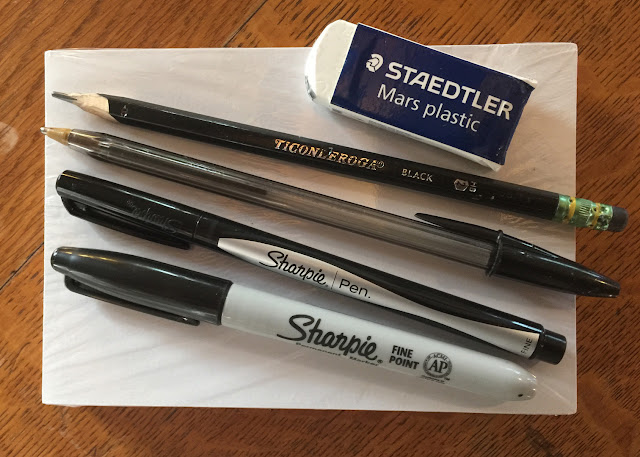 Literally well worth remembering how exceptionally simple the supplies are for these workshops: black ink markers and/or pens to get a range of line weights (thin/medium/bold) + a pencil + eraser + index cards & regular white copier paper + some Bristol sheets for the final pieces. 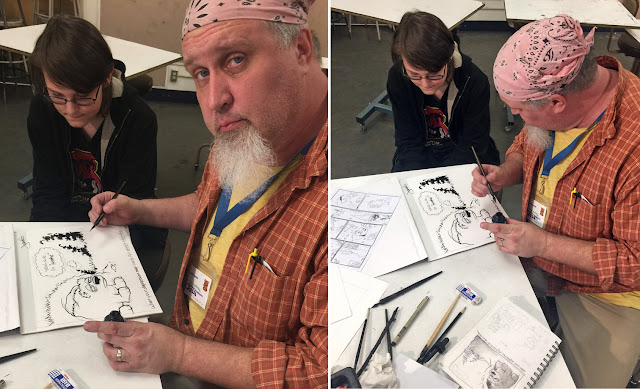 As usual I would do my own thing in the background and inbetween activities, and there’s always a bonus rare talent in the class who would make a point of shadowing me and take special care to question and observe the process in far greater detail than the normal citizen. “Those rocks look great” “thanks” 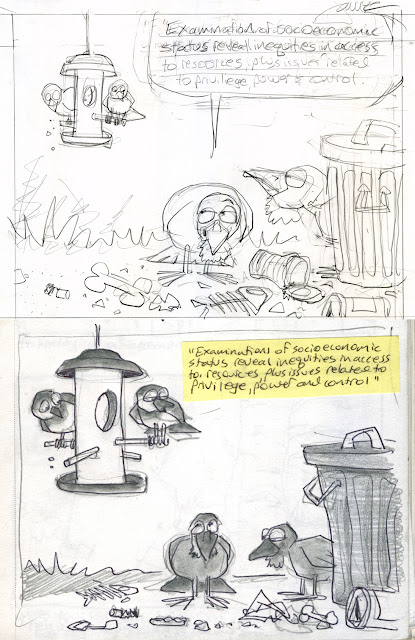 This is the other panel they got to see progress from concept to doodle to pencil/ink/wash and eventual publication in the newspaper. 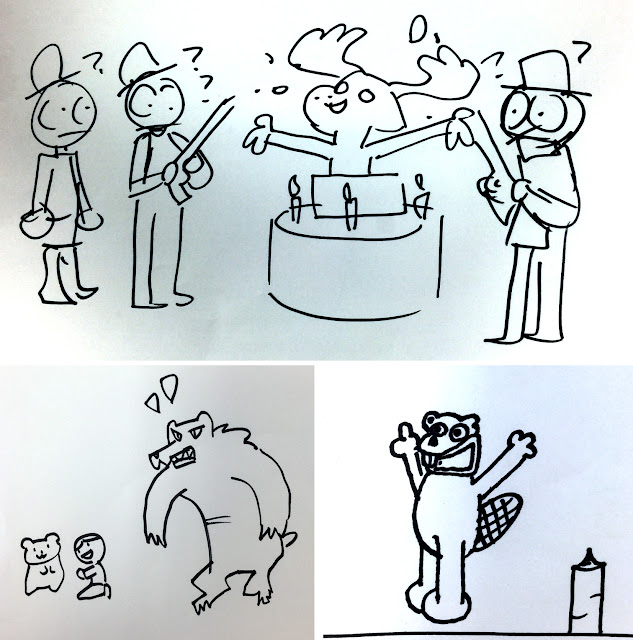 Sometimes the kid who is a little slower and falls behind in the timed drawing drills needs to be reminded that they are just in-class exercises, and that it’s not a bad thing that they don’t finish their work on times, because that just shows they care about their work and only want it to look good. That indeed is the eternal balance/struggle in art – when is it truly done? (hint: NEVER) 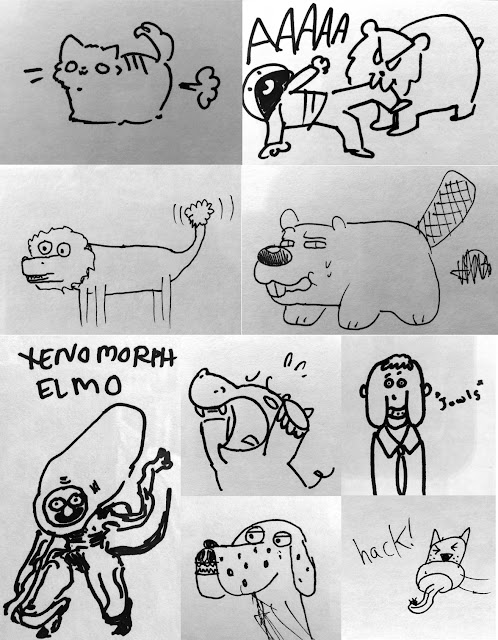 A new exercise used to stir the mental pot and get things going were 60-second doodles reacting to both letters of the alphabet and/or sound effects. 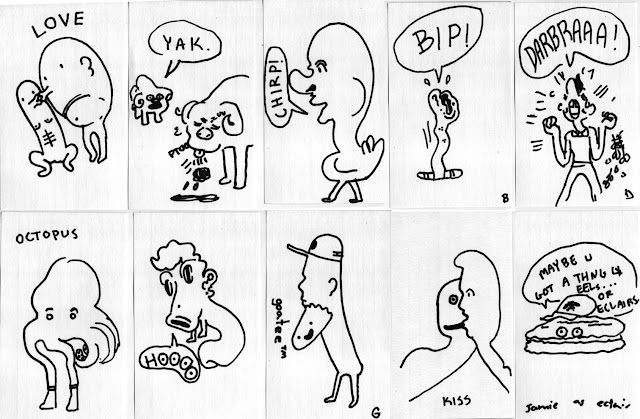 “What I do for a living is whimsical and fun and ridiculous. I'm supposed to make people laugh. We all have that child in us. For many people, that child gets pushed into a corner. But if you want to be creative, that little kid can never go away.” - Jeff Dunham 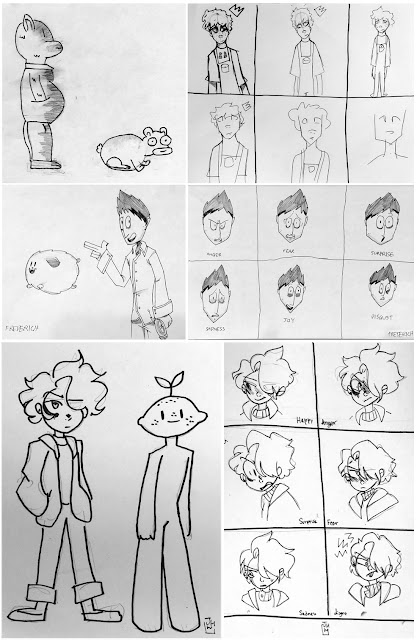 The rapid generation results in fodder for characters… 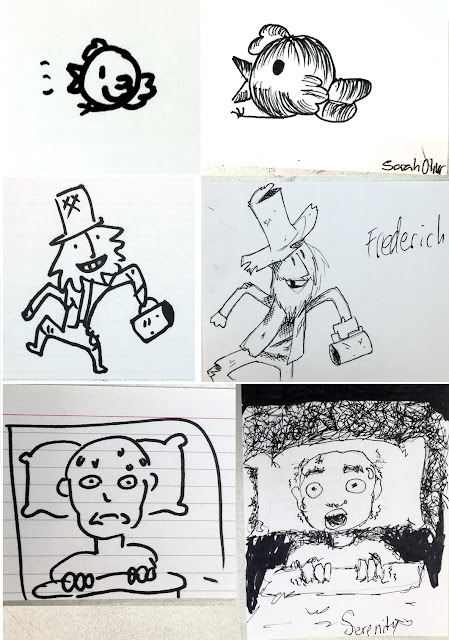 … that double as experimentation with making marks. 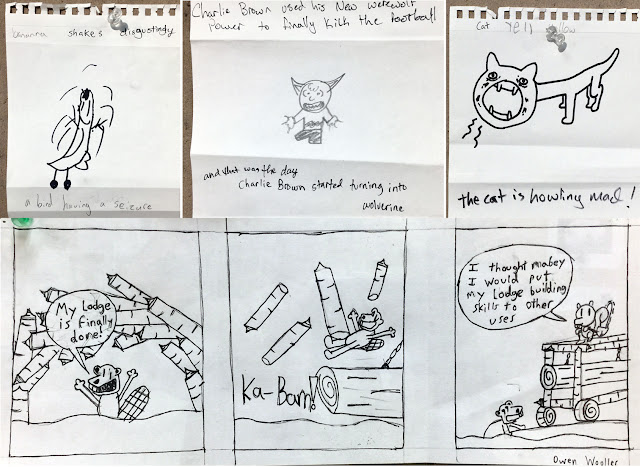 Gag panels came next, and the introduction to cartoon jams. 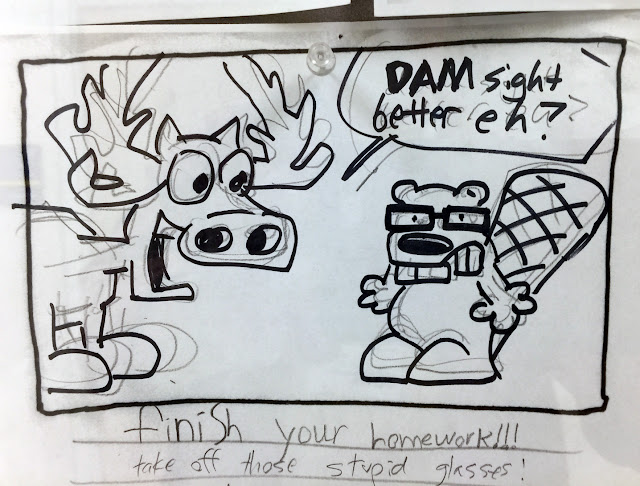 Okay I admit it: Just can’t help myself sometimes and gotta play along – no lie, I teach only what works for me, the real deal, and show & tell the truth. 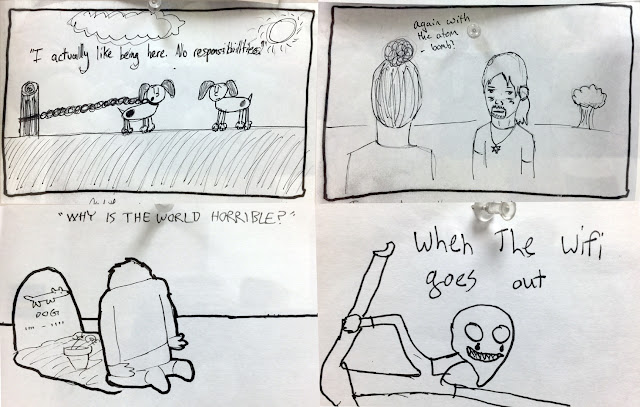 And that honestly is what I’ve seen folks respond to most of all. It’s like opening up a door inside. More often than not I simply need to get outta the way so they can go through. 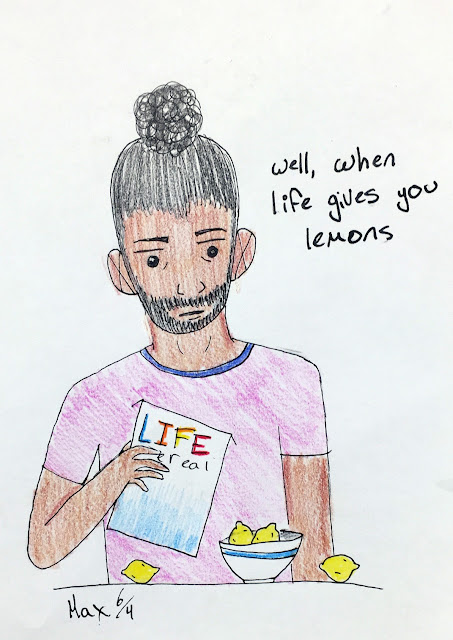 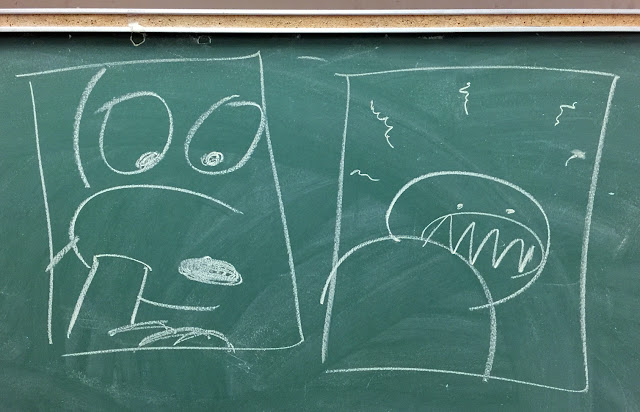 I actually incorporated a couple of exercises of Ivan Brunetti’s from his “Cartooning: Philosophy and Practice” book – he has some very strong/polarizing opinions but sure is passionate about the craft (check out his homage to Miss Peach).

Love this – esp. where the teacher lectures/emphasizes how imperfections + marks themselves have a narrative quality: one of the reasons I make all of my students utilize old-school/traditional tools of the trade (brushes & dip-pens) when drawing in my own comics classes, and I also make them hand letter their work as well. Not that I’m a Luddite about technology (a computer is hand-in-glove with my own pen + ink work) but aside from hampering some fundamental manual skills it’s rare to see digital work retain any organic qualities that make it aesthetically interesting to look at: I find myself slicking over the imagery instead. Which isn’t necessarily a bad thing itself – if the point is to visually communicate meaning as fast and as clearly as possible then there’s a use for it. Lettering being an excellent example: meticulously doing it by hand takes so much time + attention it’s is often the reason why most in the industry now use a computer instead (this post/commentary itself is another case in point). Not to mention the practical logistics in that so many people don’t know how to write well by hand anymore, and struggling to interpret someone else’s handwriting can strain or even lose the fragile attention of many readers. But one can also maintain, as an extension of what Brunetti says, that each individual letter, word, sentence etc. can be rendered in a way that reflects the personality of the creator and impart meaning, or maybe just simply look like someone actually made it, as opposed to mechanized, which is another aesthetic component perhaps more appealing than the uniformity of a font. 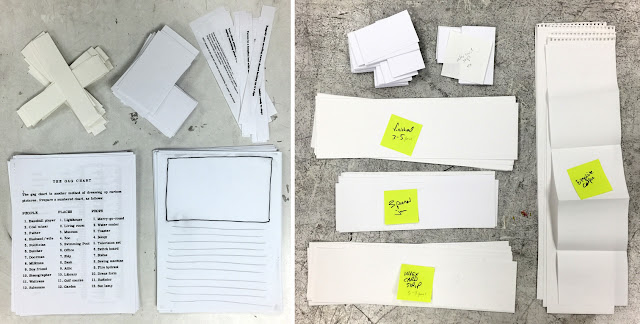 Behind the scenes setup reveals the luxury of having a studio assistant (thank you Amanda!) on hand to help with all the prepwork… the analogy I often use is that of a cooking show, where you have all the ingredients laid out beforehand, and several samples of works already at various stages of production to pull out during the show. 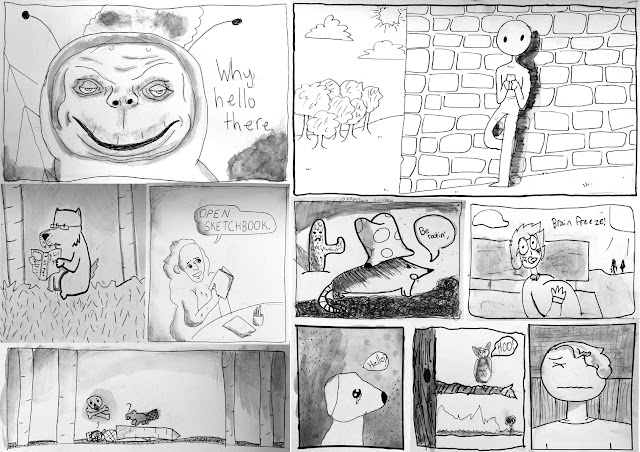 Swatches culled from the collaborative pages – always a favorite of mine and theirs both. 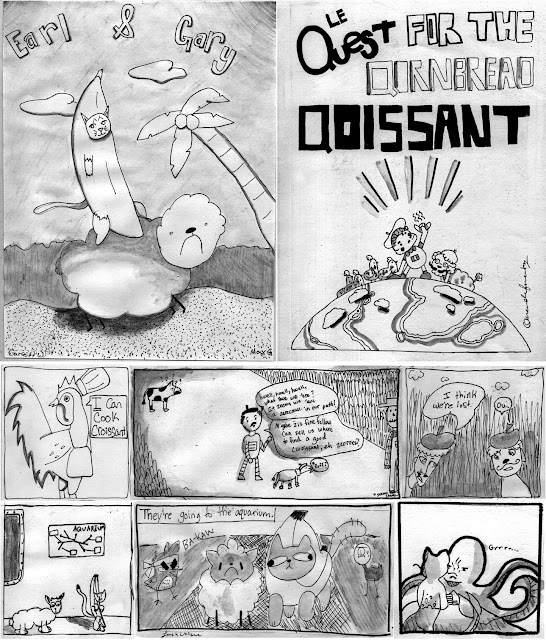 The group comic is now standard in the roster of activities – sort of a break but actually a cleverly disguised excuse to extract more material from them. 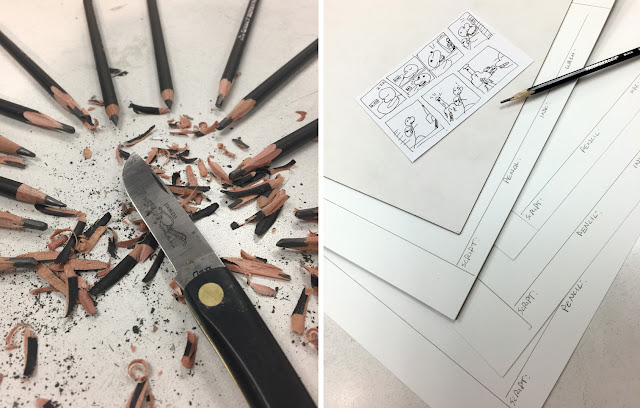 The end is near: I’m skipping over a lot of incremental steps along our way here (see aforementioned backlinks for detailed breakdown & analysis) and fast-forwarding the 2-week intensive session to get to this point in the class. 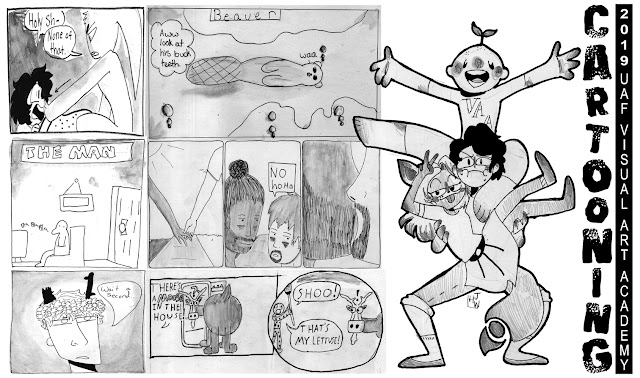 Handing out the final comic books is like issuing everyone their own ticket to the rest of their creative lives: here – now you drive. It’s almost anticlimactic to attend the grand finale opening… our special group of talent has already reaped the rewards of investing a staggering amount of effort into telling their own stories in their own way. 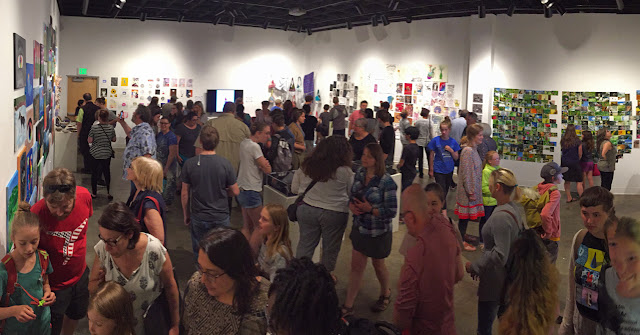