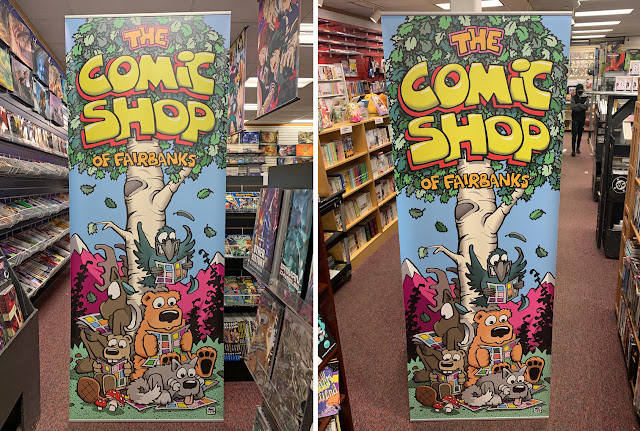 Recapping the process behind my favorite commission ever, and one heckofa project to kick off the year with. Most assuredly, there’ll be many more to follow, but this one will occupy a pretty special place in my heart – and portfolio. Not only as a capstone creation for this establishment's 50-year birthday, but also a fitting commemoration to Ink & Snow's anniversary: thirteen years and 2,243 posts! 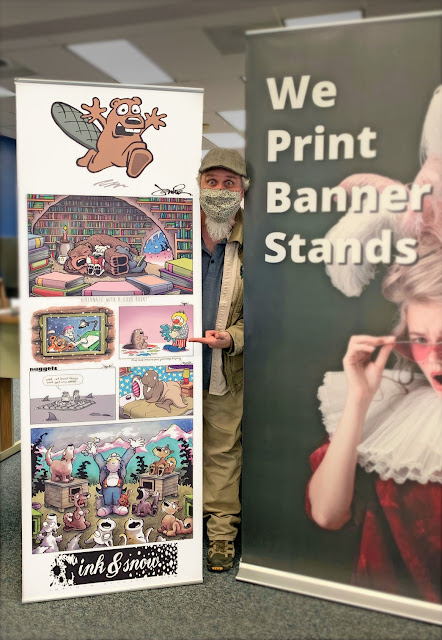 Along with being the most awesome store in the entire state of Alaska, and also hosting 24 Hour Comics events over the years, The Comic Shop is a big supporter of local creators as well. So when the guy who runs the place caught sight of my spiffy banner (printed up locally by Date Line Digital Printing), he wanted one too, for use in the store and also for their tables at events like conventions. 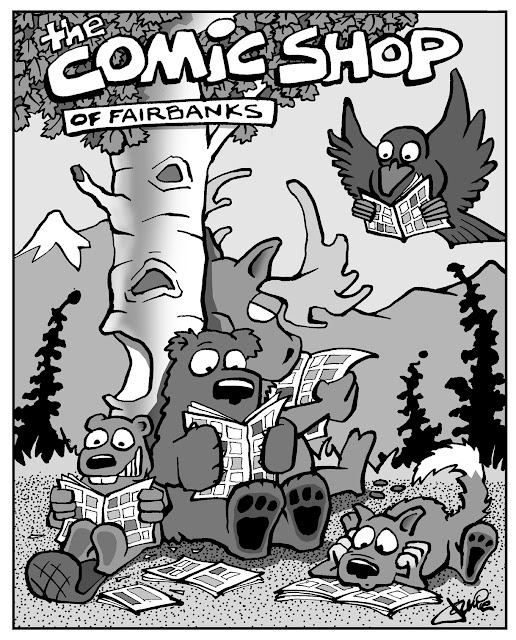 Back in 2019 the last class comic book was published for my Cartoon & Comic Arts course that ran for a dozen years through UAF Summer Sessions (starting in 2005). On the back cover of that final issue was a hastily drawn, black & white, full-page ad for The Comic Shop, where I traditionally did the big book release party at the end of the class (the crucial meta-lesson being it was a fitting context in which to view their own work as being worthy of appearing in print on those very shelves). 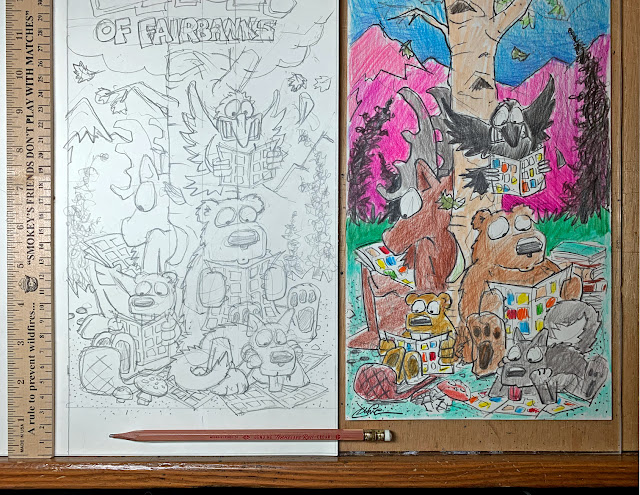 Funny how things always look great until seen again later in retrospect, as this latest incarnation puts the old version to shame. With hindsight I’ll probably have the same opinion about this one in turn, maybe in a couple decades, but for now it’s absolutely the best thing I’ve personally ever drawn, and a hell of a capstone to 2021. It’s as much fun to look at as it was to draw. I also became increasingly aware of the fact that this was going to be appearing along with works by some of the greatest cartoonists in print, so I felt some peripheral pressure to perform. Like hanging a piece up in a museum where a pantheon of heroes is in the background… you want to have it at least match the metaphorical drapes. 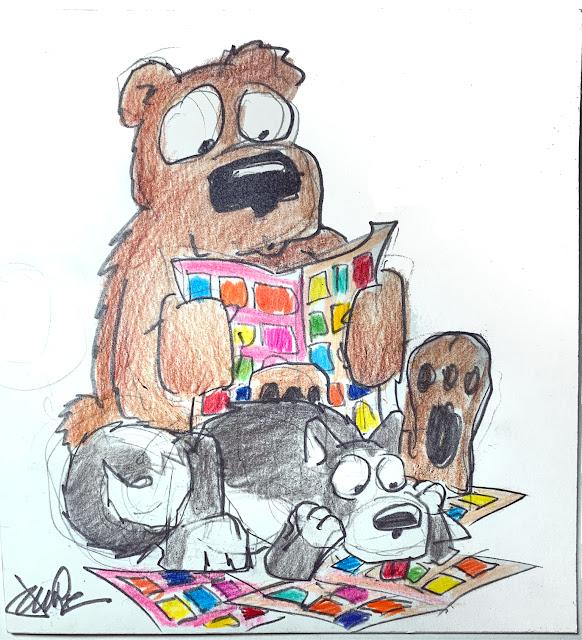 This time around I got to really make sure the composition was tight, and with the inclusion of full-color, that it would really pop. This would be another example of putting to the test how well rebooting myself plays out – so no matter how much I cringe at old stuff, it’s counterbalanced by the satisfaction at seeing such self-improvement. This perspective affords me a lot of patience + sagacity in the classroom. 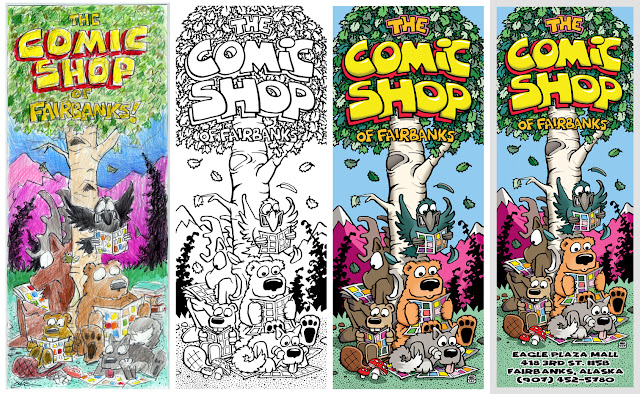 Along the way I was reminded of just how impossible it is to impart to another person exactly what it is that you are seeing mentally when it comes to convincing them how the end product will look. Specifically in this instance was knowing that any first impression of the line art would lead one to think that the words will get lost in all the background detail. Also I needed to see a physical copy of the bookmarkers to be assured the design would still work scaled from seven feet down to a couple inches. 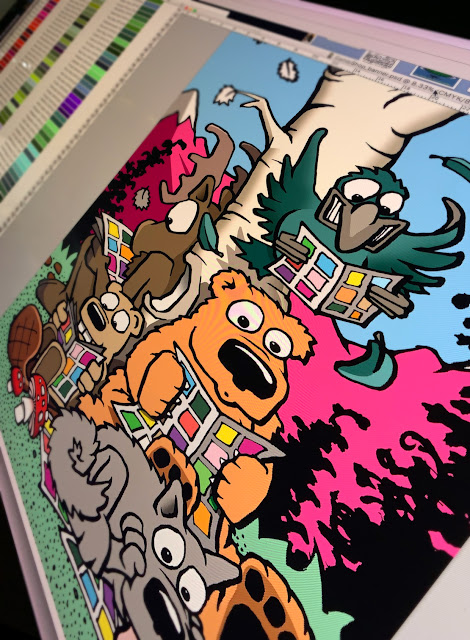 But just add magic! All of the last year’s experience with digitally coloring in all of the weekly Nuggets panels has effectively primed the pump when it comes to utilizing Photoshop. Also this design marked a return to converting my artwork to a vectored format: usually thresholding works fine, but here I ran into an issue with the (comparatively) oversized 7x16” original drawing in that the pen + ink on that particular paper stock turned out to have a slight feathering bleed (as opposed to the usual Bristol) on account of containing too high of a cotton content (like my outhouse, basically issues with too much fiber). So I ran it through Illustrator and outlined it to smooth out all the little jaggies, which opened up a veritable Pandora’s box of nostalgia, as I hadn’t traced anything since back in the early 2000’s with Streamline. So I stayed blissfully lost inside a virtual canopy of lushness: about half of the gigabyte-sized image was comprised of a dozen different greens, which provided some art therapy with a much-needed infusion of color amidst another -40°F cold snap and, even for the Interior, some exceptionally grueling conditions this season in particular. 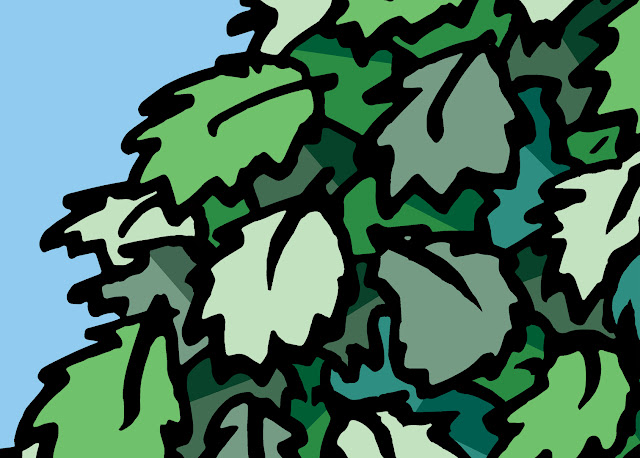 So far it’s been a banner year… Thanks Kevin and all the folks down at the Comic Shop of Fairbanks! 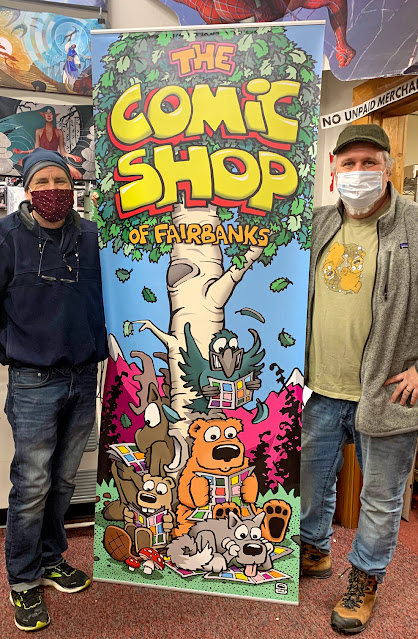