A couple notes in reflection of the "opening" weekend down at the distillery... still compiling video segments to edit together with detailed stills so as to have a nice little virtual walkthrough at the end of the month. First off is finally getting a chance to unveil the spiffy new banner made by Date-Line Digital Printing last year - makes a very nice passive but prominent presence. 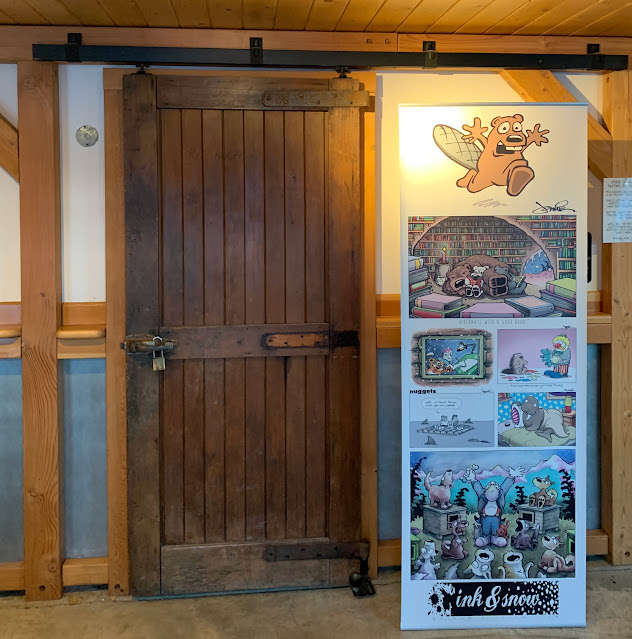 It's a good addition to the slate of options when trying to entice engagement with an audience. Unlike a formal gallery setting, venues such as this mean the majority of folks are not there for the show - the artwork is entirely incidental. I remember the first series of retrospective best-of-year in review shows that I used to have long ago at the original Hot Licks Ice Cream Parlor. That was the hottest alt-exhibition space in town - and the site of the first espresso machine in town. People would have to line up alongside the display wall while waiting to approach the counter and place an order. So I would get a voyeuristic thrill at hiding (not that I needed to - I was anonymous on account of being comparatively unknown) behind a paper with my coffee off in the corner. But the reality was being humbled in the observation that the overwhelming majority of customers never look anyways. Same here - I've seen folks sit with the work a few feet away from their faces and they never see it (sound familiar to the many personal issues I never face in my own life). The reward however comes in the occasional hearing firsthand the cause-and-effect laughter. I suppose this is the closest I'll ever get to understanding the powerful charge a standup comedian gets with a live audience - for a visual artist it can be quite the impression. 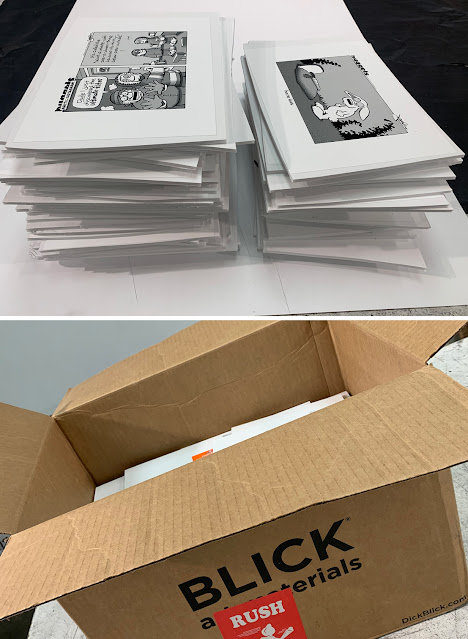 Seeing everything up on the wall also affords one an entirely different perspective on the body of work, and to an extent, the admittedly arbitrary period of time it encompasses. I feel tremendous satisfaction at the consistent level of quality drawing, marked by many examples of pushing myself to reach results way outside my creative comfort zone that I never would have otherwise have accomplished. This is always tempered by the awareness of my limitations and many failings too. Also there are several d*ck jokes this year ("Tuck In The Hose," "Pleistocene Problems," and "Arctic Skinny-Dip"), which seem to assume a disproportionate presence, or maybe you just see what you bring to the piece. And then there's the occasional dud, plus a chance to explain the joke, which is another lesson in humility. Again and again it proves the importance of teaching observational skills in my classes by such incessant training with critiques. 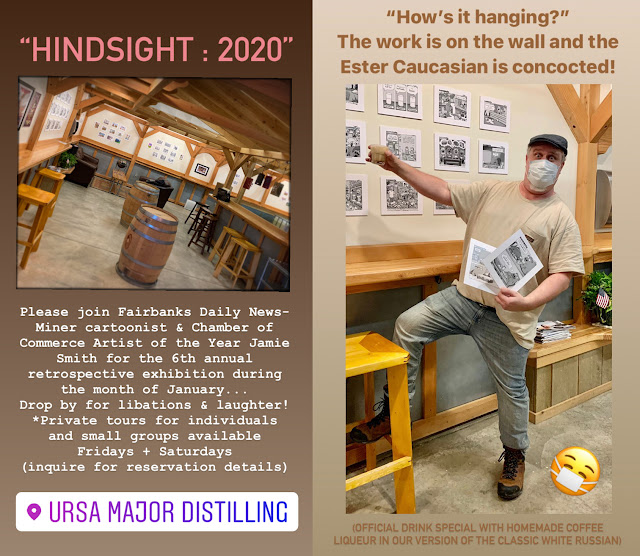 One of the peculiar aftereffects of having an art opening is sometimes getting hit with a wave of sadness as a result of the anticlimactic end to all the buildup beforehand. Investing so much time + effort on a monumental event only to feel such emotional fallout afterwards is a sneaky phenomenon I frequently warn first-time exhibitors for their thesis shows. I thought I was long-since inured to such pitfalls, but then after getting all of the pieces up for this annual retrospect and realizing that was pretty much it was kind of a bummer. Just made me recommit to reaching out even more in the marketing efforts. 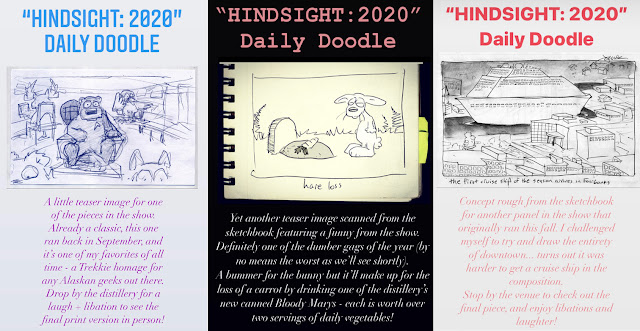 Speaking of, the "Daily Doodle" series of teaser images for the official event page has been fun to do, especially the Instagram posts with all the added filters + effects. A fun way to keep the show on everybody's radar on social media - and boost the host venue as well. Hopefully I'll drag some more media into the event and entice some television reporters out to partake and peruse. 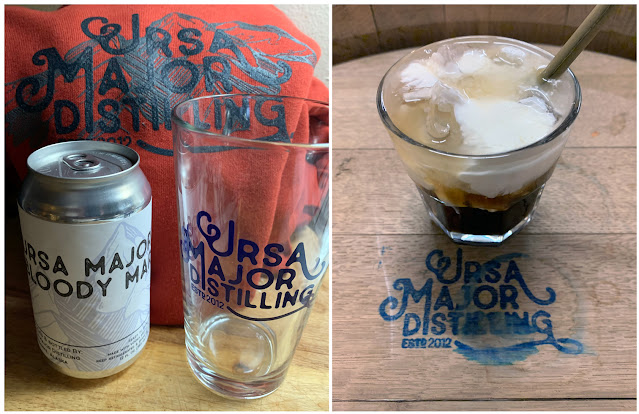 Promoting the new line of merch including the canned Bloody Marys - never had 'em before and boy am I ever a big fan now. And the line of tshirts, stickers, and glassware compliments the scene. These folks are among the many local small businesses that are trying to adapt to pandemic conditions, and deserve our mutual support since they in turn have provided us with a great venue in hosting these gigs over the years. Grateful to be able to leave behind a table on site to peddle the wares when I can't be there in person - and this year I dropped prices a bit since a l lotta people are getting pinched, if not in an economic crisis as a result of the coronavirus. 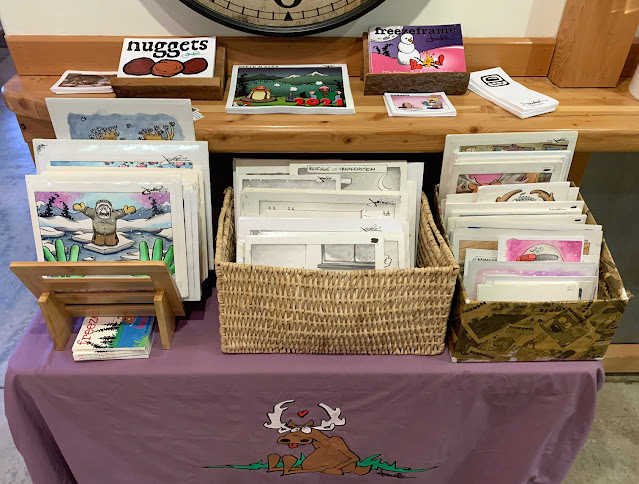 Did have several successful trial runs on the Private Tour option, and revamped the scheduling so as to accommodate an hour instead of just the advertised 30-minutes. My talk would run 35-40 minutes, but there needs to be some padding and a bigger buffer zone so as to accommodate questions and comments. Not to mention just hanging out with really fine folks. Funny how one can always tell just how big a smile can be behind a mask. Of course the laughing always gives it away. I really appreciated the opportunity to expound upon the behind-the-scenes trivia that long-time blog readers are more than familiar with. 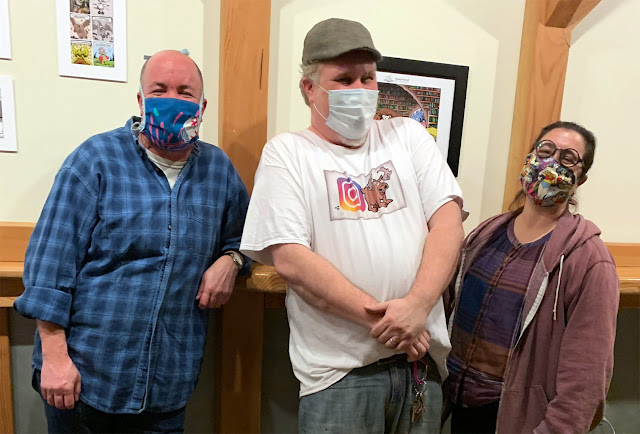