Culled a handful of the more prominent examples of outstanding work created by the Intermediate and Advanced Drawing student's portfolios during this summer session. Over the years I've adopted a regular routine with this group of students: they are mostly required to produce a minimum of ten pieces over the duration of the session. So in six weeks, approximately two works per week, which accommodates an extra week for formatting imagery to upload somewhere on-line. That workload is essentially the same amount of pieces that beginning students accomplish within the same time-frame as well, but for intermediates it involves experimenting with new and different medium and emphasizing the usage of color. For the advanced, an even higher degree of expectations, including professionalism and performance, which is demonstrated on the second day of the session when they each give a presentation about their work to the rest of us. In turn this can be a chance to hone other little-used skills such as small group speaking and effective self-promotion.
In addition to the production of work, they are required to only attend class on the first + last days of the week, when they spearhead discussions during reviews and critiques. This is distinctly advantageous in the setting of a stacked course with several levels of experience and skill are all taking the class together: the opportunity to share their respective knowledge and insight through supportive interaction with other students is comparatively more rewarding than the classes where each level (Beginning, Intermediate, Advanced) is partitioned off in their own separate studios.


That loose and open free-range approach towards largely self-directed study also means they are entrusted to maintain a fairly rigorous schedule with self-discipline, and along the way learn a deeper understanding on the logistics of producing a cohesive body of work under intense deadline. Sounds easy enough excepting when one factors in other classes, a job, life etc. Again, no different that a normal semester, excepting the compressed calendar.
Another note of distinction in my penchant for giving advanced folks the reigns is how, more often than not, by this point in their academic career in the visual arts they ought to be fairly champing at the bits to tackle themes more in depth on their own terms. This is in contrast with a tendency amongst faculty to sometimes micromanage, or be a "helicopter teacher." My underlying assumption is that they know what to do, and how to do it - but just need the time + space to do whatever it is they really want to do. Plus, to be completely honest, at that level there really isn't anything I can personally add to a critique of their work (okay well, maybe a few suggestions): I'm far more concerned with what they are doing with their work. So marketing and promotion comes into play at this crucial stage, especially when it comes to online portfolios. If the established, traditional order of the gallery system is inexorably becoming as obsolete as the record label industry woes in the advent of digital platforms. it behooves instructors to facilitate their entry into this new and exciting paradigm.


So to those ends, see more Scott Holladay here, Devante Owen here, Anne Williamson here, Alyssa Quintyne here, Tianyu Qiao here, and  Tara Maricle here.
Check 'em out... I did for six weeks and it was a real kick in the creative pants to watch their work evolve and unfold. Their results speak for themselves: a lot of intense effort + imagination + experimentation.

Critiquing the critiques is always an ongoing preoccupation of mine in the studio art courses: whether it's the first one of the semester or the last (including the grading of the portfolios), it's an opportunity to review the procedure itself and examine the relative effectiveness that various approaches have. These include the classic "line 'em all up against the wall" where all of the works are displayed together and we take turns alternating commentary between one student's take, and then that student's piece in turn is discussed next and so on. Then there are small group critiques (covered in a bit more detail later in this post), non-verbal/written critiques, and also one-on-one assessments that generally take place around midterms, so as to place the piece within an overall context of the student's work to date. Each approach to a new style of critiquing happens after an assignment earlier in the week (typically falling into a Monday/Friday rhythm) which serves as an introductory or dry run on the upcoming method.
Within the context of an academic institution a critique assumes greater, or at the very least, different implications, as opposed to the more informal reviews that are inspired by, say, attending exhibitions and openings. It's a definite goal above + beyond the making of art to have students feel confident and comfortable in either of those arenas while they discuss other people's works, or while defending their own. Articulating one's decisions and describing your process is quite often just as revealing and insightful as the works are themselves - and it's a distinct advantage to take the opportunity to avail oneself of the multiple viewpoints and opinions within a classroom setting. Trust me, you'll have the rest of your creative life to operate in a vacuum, like making your art tucked away in the woods in a cabin in the middle of Alaska, for example. Public interaction and critical input isn't always necessary or even wanted, but it has its uses.


Via Mike Lynch comes this extreme example of "gobbeldygook," but it’s not so much the language and terminology being used – it’s the attitude on display. The delivery is a caricature of poseurs, which actually exist in just about every field, whether it’s car enthusiasts, foodies or grad students in the sciences to professors in academia. Learning to critique is a skill that is easily translatable to any job, and indeed is a marketable asset to possess: it doesn’t matter whether one is assessing a painting or politics, buying new furniture and redesigning one’s own living space, or commenting on your partner’s choice of attire or movie tastes – it would behoove you to develop some objectivity (which in turn can be used to reflect upon your own biases), empathy, to say nothing of better, more effective and reflective methods of communication, reaching consensus, and fostering a deeper understanding on different perspectives to any issue. Put another way, thinking about such things will “enable students to enhance their skills in innovative, creative and entrepreneurial thought and action as applied to their specific discipline or career area of interest.” Like the animation illustrates, there’s a danger of going to either extreme: “I like it, I don’t know why, I just do” or the opposite; “taking on airs,” which feeds into a dangerous and rising tide current of anti-intellectualism, ignorance and knee-jerk reactionism. The world definitely needs more informed opinion and meaningful debate, not less, and to sit around simply hooting and grunting in pleasure or flinging poo at what we dislike or don’t understand.

I try to rotate different methods of critiquing over the course of the session or semester: the dynamics of each class can greatly impact the comparative success of each approach.
Since, as mentioned earlier, the summer session courses are stacked, that is to say there are beginning level students (comprising the majority of the class), intermediates (maybe a quarter) and a few advanced folks to round out the roster. That is a perfect ratio of experience to shuffle into the mix during a class critique, especially when we are taking the small group method - then there are a handful of beginners , a couplefew intermediates and at least one advanced student within each cluster. I designate several specific areas on the walls of the studio to pin the pieces up, taking care to distribute the relative caliber of the work in accordance with a balanced, proportional mix within the groups, and turn everybody loose. The advanced folks usually take the initiative in ensuring commentary is given by each and every person on every piece. I generally float around the room accessing the progress, so that when everyone's had their work discussed we can move as a class from each cluster of pieces to another, and the advanced student from each group can give a succinct breakdown of their discussion, which opens up additional comments and observations from students in other groups.
Ideally by the end of the session or semester most folks are much freer and more open with offering up their informed opinions, without much if any prompting on my part. That then equates a significant success, regardless of their respective increases in rendering skills. Looking at, thinking about, and talking over art is an essential component in the creative process. Exposure and experience with different approaches in critiquing serves to better educate everyone, from the artists themselves to the viewing public, as does awareness of personal bias or standards. 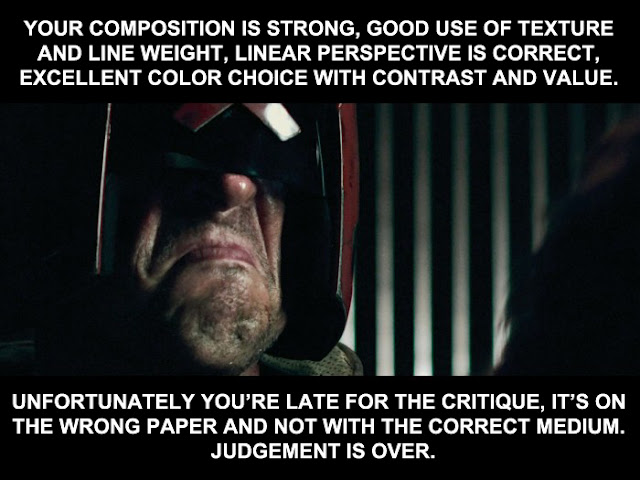