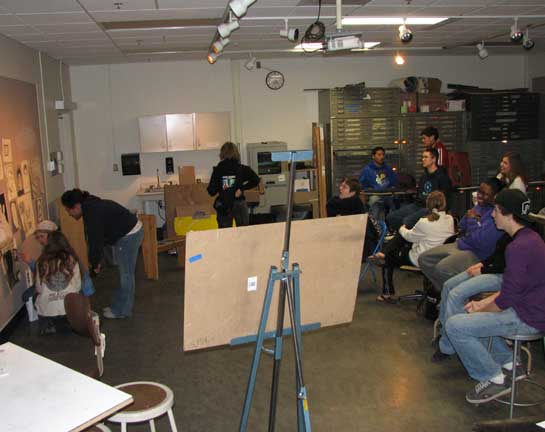 "To escape criticism – do nothing, say nothing, be nothing." - Elbert Hubbard

On the drive in the morning of the final, I was thinking to myself; how lucky can you be to get up and look forward to seeing some really cool art first thing in the morning? Ok, so that's almost completely negated by the stress over grading and the inevitable speed bumps and potholes that come with the job, but, like the drive in, it's nice while it lasts. And then ... you arrive.
My pathetically feeble attempt at a "rallying cry" went something like the pep talks you'd expect to hear from a cheesy motivational speaker or the host of some daytime cooking show. But really, I'd much rather look at the final not as the last day but instead see it as the first day; not as in this-is-the-first-day-of-the-rest-of-your-life, but instead; now you can maintain cruising altitude and keep producing your own works in your own way, knowing not only what you can do but also what you can do with it. Something like that at any rate. The question remains, for me and everyone else in the room: what are you gonna do now?
Well this semester I caught the best answer and shining example from a student in this very class: one student came bouncing up all bubbly and excited right before the final just to show off to me a very special card she'd made for her sweetie. Doesn't matter what was on it or what it was about, but it was personal and it was perfect - this is what it's all about folks. I absolutely love seeing stuff like that, as it circles right back to the very beginning of the semester in my opening lecture; you may aspire to be a "Fine Artist" and have your works framed and displayed in a gallery, that's cool, I'm all for it, I'll back you up and show you how it's done; but that said, for me it all comes down to reaching out and making that connection with someone with something you did. And it might just reach far more people and make a real difference in someone else's life if you just do your own damn Xmas card, or your drawing goes up on someone's refrigerator or outhouse. Well, this student went and took that advice to heart and it just made my day ... okay, my whole damn semester at that. At first this artsy-fartsy rational might seem contrary to the constant economic aspect and self-promotional/marketing angle that I've been preaching at the same time all along, but it's all part and parcel of the educational process. 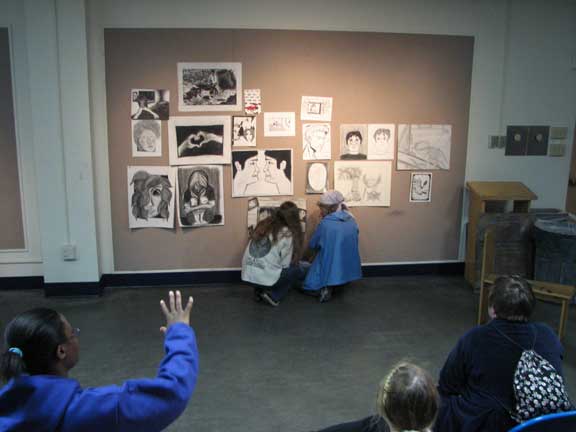 So the atmosphere was thick with tension and fear ... no, not really. Everyone stuck their piece(s) up on the wall, pulled up a chair and we went at it; one at a time, picking random folks to spearhead discussion and review of what works, what might work better and why. One last go-around, like a well-oiled machine, or a band that's been practicing playing together for months before for the big gig.
High-points for me was the absolute demonstrated mastery of previously challenging aspects (like for some, for example, finally getting linear perspective), and a handful of real breakthroughs, personal achievements and major accomplishments. I'll post a sampler batch here next time, but there were a few mind-blowing, jaw-dropping pieces that got some oooo's & ahhhhs. Only a couple paled in comparison, or didn't look quite finished, or sadly, not meriting the status of a final piece, as in didn't pull out all the stops and incorporate everything learned so far. In other words, the usual experience all-around, complete with rewarding and disappointing moments. Our critique went for about an hour and a half, then cleanup commenced: emptying drawers, pulling pieces off the wall from the student show, and for a few, last-minute desperate portfolio stuffing. 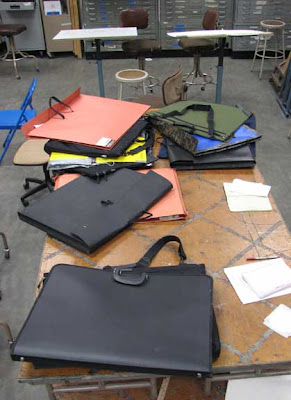 For me this is the part where I metaphorically start to sweat blood & tears. Even though I had already gone over grades with everyone individually last week, and barring sudden death, everyone pretty much knew in advance what their approximate grade was going into this final stretch, there still is some genuine surprises in store every semester even at this stage of the game. So I put on some tunage, grab a ginormous fresh cup of coffee and start tackling the stack of portfolios with one eye on the grade book. Also I make a stack of copies from the checklist so as to jot down any personal notes or comments, and additionally write out each letter grade they've received for all five assignments, all five critiques + absences so they can see the tally accumulation. This gives me a chance to assess progress and duly note any reworks. Attendance reared its ugly head again and again as a mitigating factor, and regrettably accounted for a couple near-misses, or at the least making the difference between a plus and a minus. Overall there was a preponderance of A-'s and B+'s as opposed to the usual pack of C's - this was attributed to the habitual reworking of pieces done by several doggedly determined individuals, and a couple stellar examples of constructive and inquisitive participation in discussions. It all counts for something in the end.

This portion of the morning took me about two hours total, not counting the interruptions, miscellaneous diversions and frequent breaks. This really is a struggle, no matter how much you've managed to quantify the abstract and reduce grading of art to a systematized, formulaic process. Grading takes just as much, if not more time, care and attention as I expect students to devote to their work; respect is due their efforts in turn. And there is an awful lot of attention to detail, given the veritable avalanche of material I sift through - even if I've taken pains to effectively edit their required examples down to the essentials. Lots of balls up in the air at the same time to juggle - mostly the middle ground is where there's gray area open to interpretation, as the "easy" extremes are quite often predetermined and expected outcomes. Every so often I'll also tack a few pieces up on the wall and snap some digital pix for documentation and to freshen up the files of collected examples to show future classes specific assignments and critiques. The portfolios are stacked on a table for them to pick up in the afternoon, while I track down the final class roster/official grade sheet to fill out with the Official Red Ink Grading Pen, and as a matter of habit due to unfortunate experiences - make a copy for my own records in case someone in some anonymous cubicle screws up and hits the wrong button by accident. 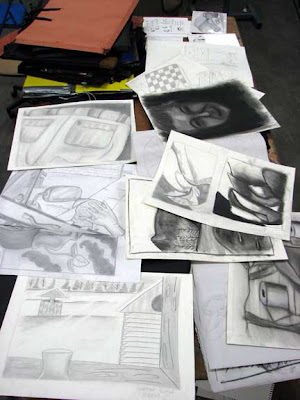 Aside from the one student who totally bailed out on both the final critique and turning in a portfolio, probably the major eye-opener was from the sole A+ in the class. And not from sheer ability either - this was a clear-cut case of setting the bar for everyone else by simple dedication, perseverance and raw output. For each and every assignment/critique piece required, this person did easily twice the amount of work that anyone else did. Case in point being for the final, she put up three works on the wall for review. Afterwards, while shuffling through the portfolios, I found the other SIX ADDITIONAL PIECES, for a total of NINE done for this one critique. Not to mention at least half of 'em were better than anyone else's. Now that's the kinda performance that puts everything into perspective for me, and is so gratifying to get, so inspirational that it literally makes it all worthwhile (cue strings). It empowers me to walk into my next class on the first day with a fresh look on things, get a firm grip again and a rebooted attitude.

It's like finally doing a really really good drawing after cranking out seemingly endless numbers of so-so ones; that one you knock out of the park will keep you stepping back up to the plate and swinging, or drawing, with all your might, for as long as it takes to do it again.

"Rest satisfied with doing well, and leave others to talk of you as they will." - Pythagoras
at 5:26 PM