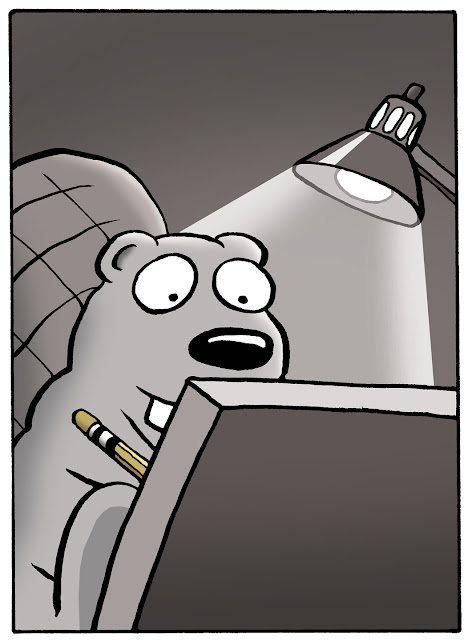 My final submission for Project 1 in the digital coloring portion of my class: one page was required, and most folks opted to either use someone else's inks or recycle their own line art from an earlier assignment, from another class. I drew three small pages (plus the previously posted "Bluetooth" panel), an introspective observation that documents my travels as of late. Aside from the physical and geographical changes (symbolized by totemic critters) it also reflects a deeper pattern of behind the scene aesthetic explorations, and stylistic evolutions that are more of a theory of personal punctuated equilibrium. Meaning it ain't ostensibly "funny" - nothing to "get" apart from the usual overly of irony of everyday life. That said, infusing a piece with epic, inner significance has debatable results as far as its potential impact, or "success," especially within the cartoon genre*.


More musings after the jump...

One decision was to deliberately leave it non-verbal, so as to focus more on using color as a storytelling tool. Which implies the original art alone needs as much help as possible, since it might possibly be pretty much indecipherable left on its own. And after everything was said and done, the piece remained just as damned cryptic and mysterious, so it's maybe now more in the realm of Fine Art.
But seriously, there more subliminal content shoehorned into these nine panels than anything else I've done over the past few years. And there is an escape route mapped out: the layout of each panel allows for possible caption boxes to be added at some later point, on the offhand chance I choose to box in the interpretations of a viewer and frame the meaning more towards what I intended to convey. Or not. This piece also plays around with unfolding a linear narrative beyond that of a single-panel: much easier when adapting the medium of a multi-panel strip (even more so over the pages of say a graphic novel), but I was interested in experimenting with the expansion and contraction of a story that doesn't explicitly map out each sequence. 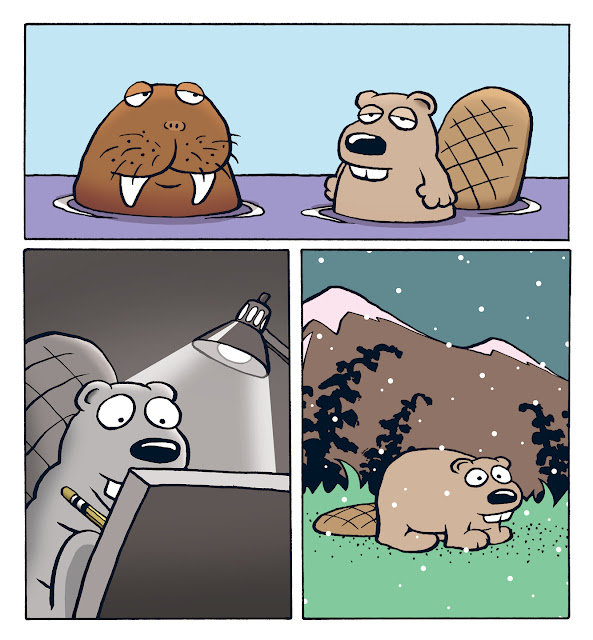 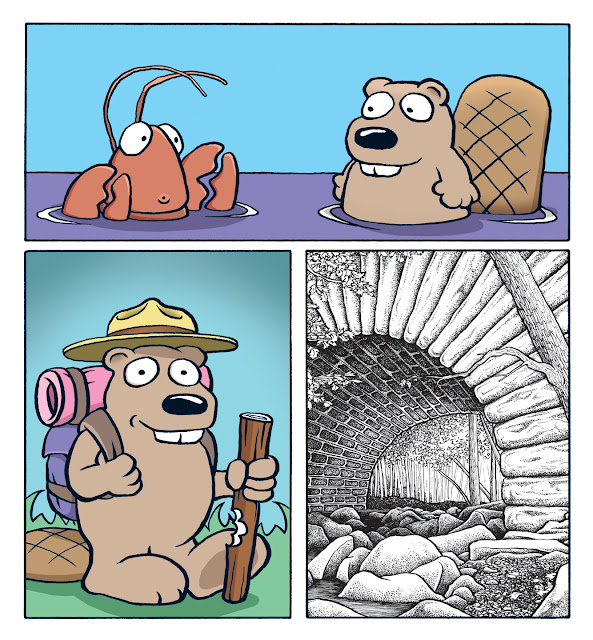 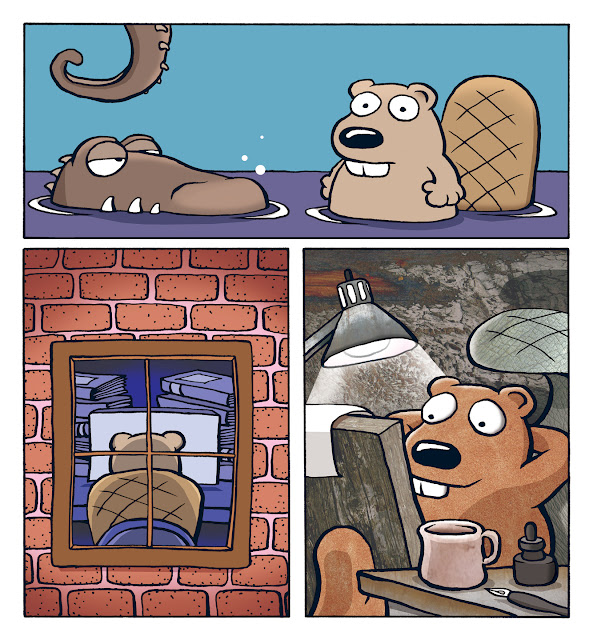 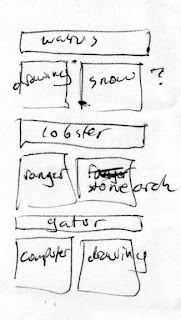 As evidenced by the abstract doodles of the posted thumbnails, there wasn't any particular idea as to where this was going, no conscious method plotted out initially, aside from the parameters of the assignment (the art had to contain panel-to-panel progressions). So in lieu of verbal signposts that would dictate the reading of the pictures, color is employed to hopefully provide subtle clues and reinforce the underlying intent. On each page there are three environmental "establishing panels" that ground the location: Alaska, Maine and Georgia, respectively. There are overarching time-frames as well: page one is distant past, page two is recent past, page three is now. Color, contrast and complexity are all used as subconscious cue to indicate these shifts in time and space. For example, the atmospheric colors are faded and colder with distance in Alaska, sharper and clearer in Maine, and finally saturated and warmest in Georgia. There is also a juxtaposition between the simple and flat rendering in say, panel three, versus the comparative depth and richness of panels five and seven, along with the progression to more complex compositions. Even black and white is used as a crucial component of the story: the touchstone image from this summer's internship interjects the reawakening of my illustrative side, at both a return to another way of drawing and simultaneously a portal through to the new. The cyclic interlude of sitting at the easel is first in the "old world" of monotone, then rendered again but instead with experimental textures. Another note of trivia is that the only element in the former black & white panel that is in color is the pencil, and in the closing panel, the pen & ink paradoxically remains the only object still in black and white.

Lastly there's a private nod to the work of Terrence Malick who's majestic cinematography echoes a similar motif of elemental symbolism especially through the portrayal of water, and the reoccurring presence of stone, whether mountain or mortar, and a sense of place.

*Or, alternatively, this is simply just a cute little story about a beaver, who met some other animals, and went on adventures to different places, and got lots of neat ideas for his art. That works too.