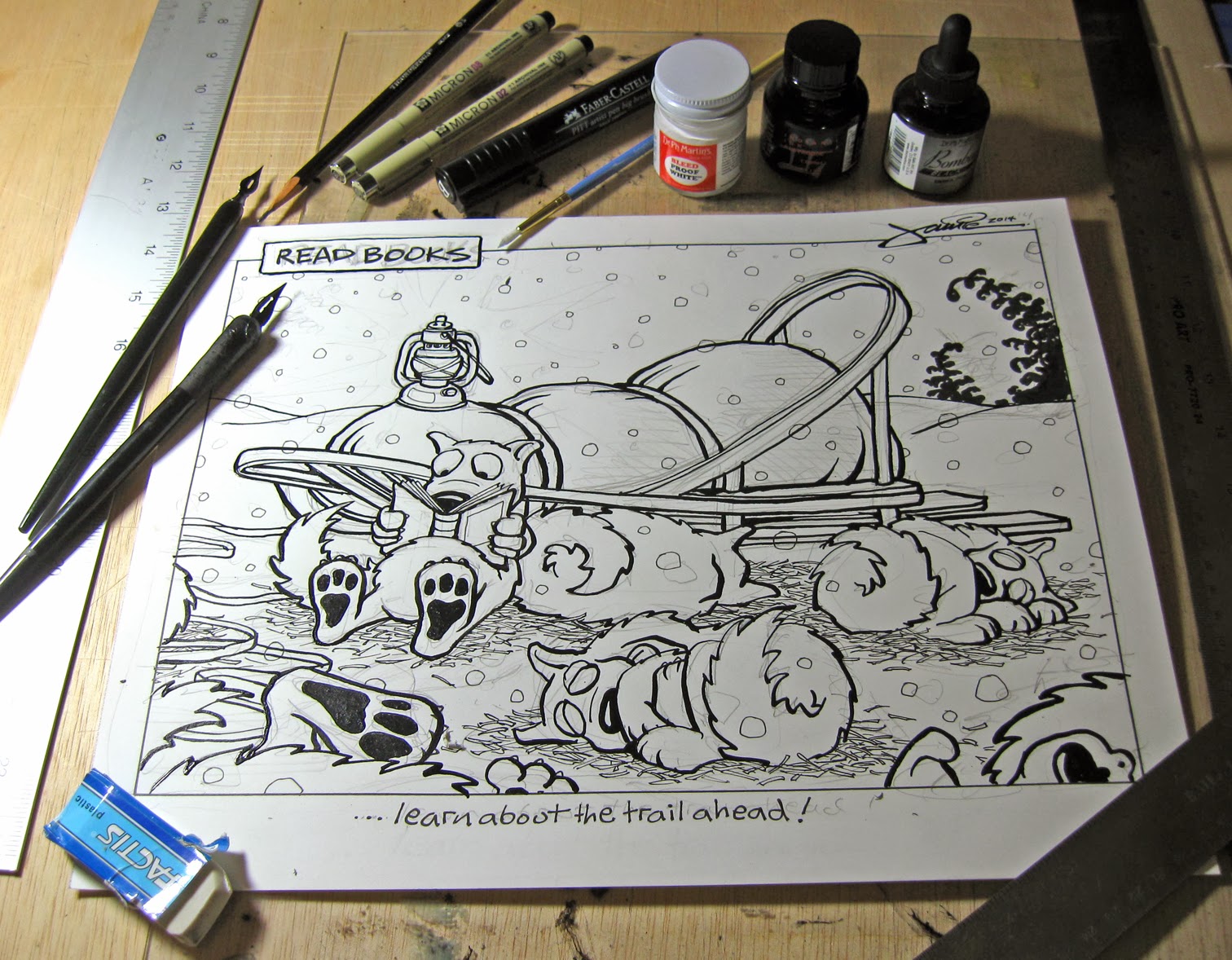 Another installment on the Literacy Council of Alaska benefit piece (previous post with the pencil version here). Whereas I'd normally lump everything under one big ol' "Process" post, I'm staggering this one out as it gradually evolves. Which means now I have another chance to plug this again:


The Literacy Council of Alaska’s 22nd Annual Biz Bee is scheduled for February 20th – it will take place on a Thursday evening starting at 7pm in the Westmark’s Goldroom.
Sponsored by the Fairbanks Daily News-Miner it is the “signature community event” for this vital non-profit agency. Since the Biz Bee first started, it’s been the primary fund-raiser for the Literacy Council of Alaska: over $400k in donations to date have been raised through this single venue. Last year they had nearly 300 volunteers serve over a whopping 16,000 hours to help “change lives through literacy.“

Besides the main event, the spelling bee, there will be a silent auction as well, featuring many works of art – including the original panel (pen + ink/watercolor) for this cartoon.

Call 456-6212 for more information, or visit the Literacy Council of Alaska’s website to sign up and get registration forms, or stop by in person downtown at 517 Gaffeny Road ... maybe browse through the Forget-Me-Not Books while you're visiting! 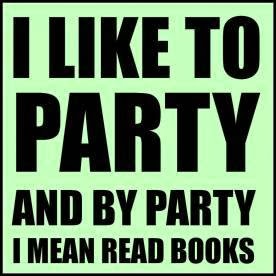 ... more mulling after the fold...
SO anyways, after housework + dinner, the inking's done... time to let it thoroughly airdry overnight before erasing in the morning. I absolutely love getting up early when there's something like this to look forward to on the drawing board. Some manual cleanup/touchup > scan and start working in tandem on both digital coloring + watercolor on the original.

So far the implements of craft have included: Ticonderoga HB black for penciling, Strathmore 400 series Bristol board (11x14"- as opposed to the usual pad of 9x12"), two thicknesses of dip-pens, fine + extra-fine, using Sennelier India ink + Dr. Phil Martin's Bombay Black (respectively), 02 and 08 Microns (for ruling the border + textural details like the straw bedding for example), and a Faber-Castell PITT "Big Brush" artist pen (birthday gift from The Significant Otter) for the black spruce. Lots of changes made on the fly, like throwing in a few exaggerated foreshortened elements in the foreground so as to push pictorial depth a wee bit more, and also opening up some visual breathing room in the upper left part of the composition so as to better facilitate the implementation of the next aesthetic elements: value and color. 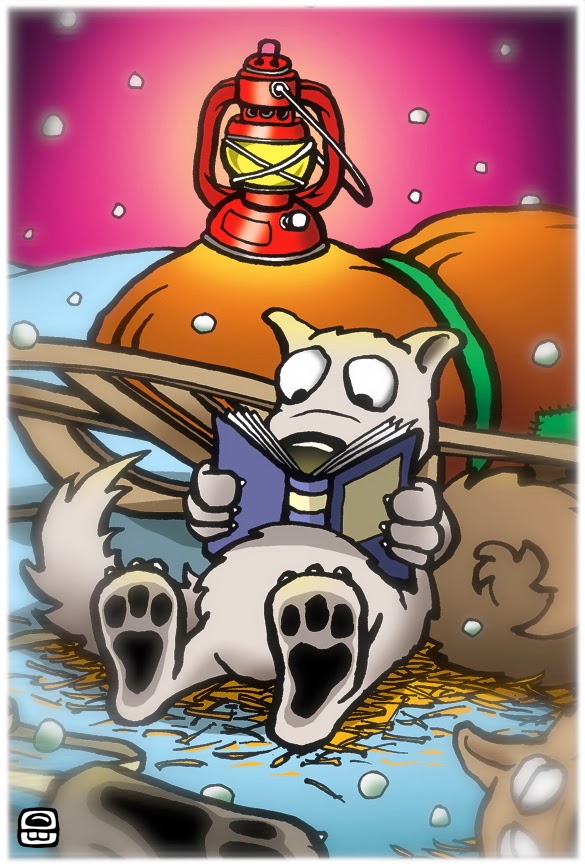 *Update: Here's a tease for the digital CMYK version... and true to my earlier words on the anniversary post re: cyclic re-evaluation of what's my personal "favorite/best-of" works, this panel tops the list (now). The pinnacle of creative achievement has to be the sublime satisfaction in seeing step-by-step unflowering from concept ("hey - this would make a great idea") to the initial sketch ("yeah - that'll look pretty good") to inking ("wow - this looks better than I thought") to coloring to proofing a print and seeing firsthand confirmation from folks walking by the table at the cafe ("I want one!"): reconciling oneself to doing work without the benefit of positive feedback or peer recognition or validation through the marketplace are all important facets to being an artist, but damn it's nice to get an atta-boy every so often. I mean, it's debatable as to the relative merits of making art purely to please other people - which is the domain of commercial art - as arguably one has to please oneself first and foremost, but the creative balance is predicated on their being an opposite extreme which is pure narcissism. So there's a tension in inspiration and motivation, a continual continuum of questioning: what's it for/what's it all about/why-caliber Big Questions. And art is a physical manifestation of some possible answers - and like making artwork, there's never just one answer. It's also a cause & effect/direct connection between something that didn't previously exist that you bring into being and it makes other people smile. which is all anyone could really ever hope to achieve in life.

**Update II: Just got some great news - stay tuned for a really spiffy upcoming event involving this design! Woof!
at 6:00 AM