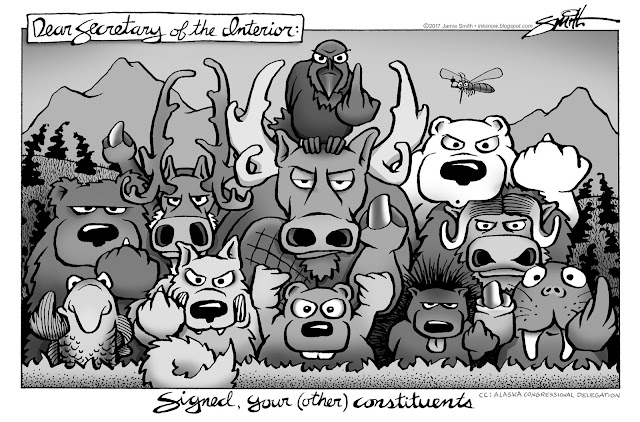 Original post from April (and originally appearing February 2018 in the final issue of The Ester Republic) this probably seals my fate as a forever former interpretive ranger. Can't say I wasn't warned, what with the vindictive vengeance of this openly corrupt administration. It's especially poignant what with the current politicization (and privitization) of previously apolitical positions in public service, particularly our public lands 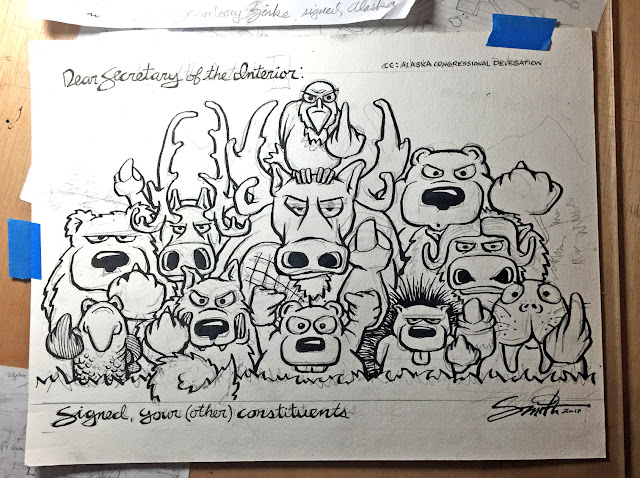 On a technical note, render animals extending their middle fingers can be a challenge, especially when such ungulates & passeriformes lack the requisite digits to begin with. But this is why we draw to begin with. And nevertheless, they still get the point across…

Mighty appreciative of my editor for the placeholder: she emailed my plea for an extension on the deadline with this: “No way will I go to press without that cartoon!” 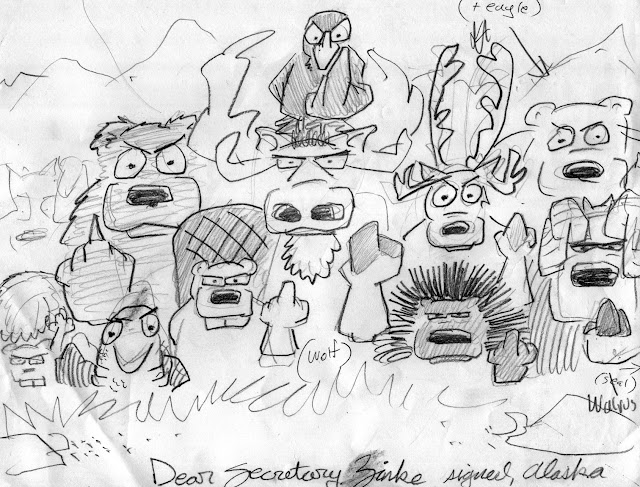 Also this particular panel incidentally illustrates the artistic trinity of exposure: in print + on web + on the wall (bonus in appearing in both the infamous annual retrospective and scoring an honorable mention at the Fairbanks Arts Association's annual juried exhibition (appropriately enough themed "Whimsy"). 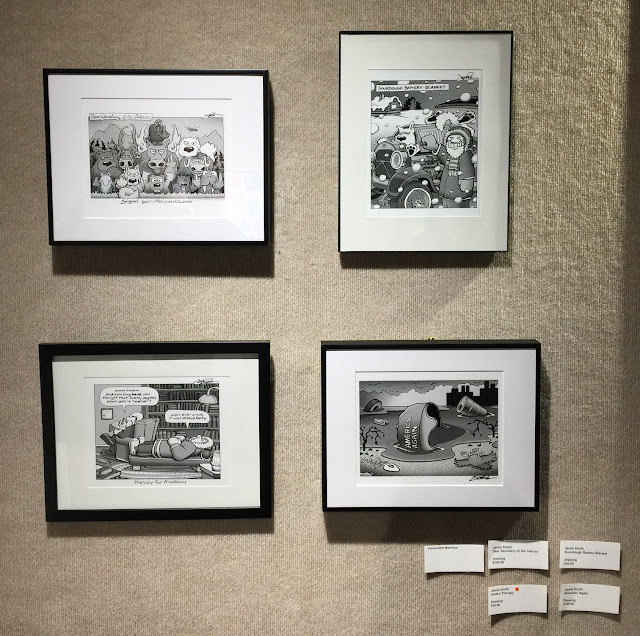 Add to all of that the sale of the original watercolored piece and you have a good run. Now all that's left is to personally deliver a signed copy to his office in the downtown Federal Building (suitable for framing).

Now as a break from the usual accompanying rant, I'm foregoing any annotated breakdown of citations in favor of simply reposting excerpts + direct links. To be honest, it's just basic goddamned outrage fatigue at this point: not being lazy - just can't keep up with the inexorable deluge of daily aberrations that make up this burgeoning backstory. It's only a partial snapshot of the spread of this systemic rot: virtually every agency head installed by the current administration has compromised the integrity of the United States by demonstrated astonishing degrees of hypocritical corruption, incompetence and/or a vested interest in undermining the very same agendas their departments are tasked with upholding and entrusted with defending in the public interest. Notwithstanding efforts at resistance, familiar examples are Education (DeVos), the FCC (Pai), the USDA (Clovis), Labor (Acosta), Justice (Sessions), Housing (Patton), Urban Development (Carson), and many, many more at every level of “governance” and “leadership.” And don’t even get me started on the E.P.A. (Pruitt).

So without any further ado, here's a running master list... so far...
(after the jump) 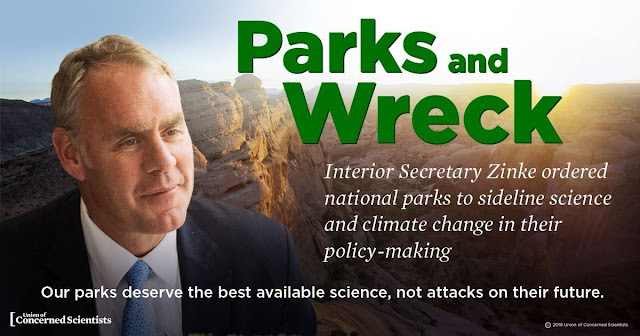 • “To attempt to link Lee’s achievements for the Confederacy which embraced White Supremacy to that of Dr. Martin Luther King, Jr. is not a slight oversight but a huge historical misappropriation that the descendants of enslaved Africans cannot accept or tolerate” (link)

• "At last count, Interior Secretary Ryan Zinke was the subject of 14 separate government investigations. (A new record!) But that number could soon be zero. That’s because Zinke just fired the Department of the Interior’s acting inspector general." (link)