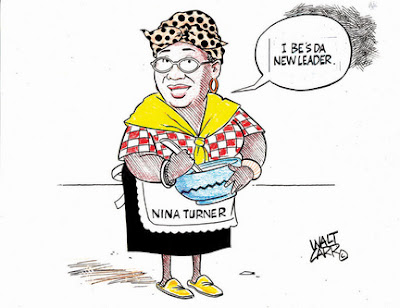 "There was a time, not very long ago, when cartoons in the White press were everything but a laughing matter to Blacks. Too often, their sole purpose was to demean Black people by portraying them either as pathetically primitive jungle creatures or grotesque-looking, dialect-muttering buffoons. Thanks to the dignified, non-stereotypical portrayal of Blacks by racially aware Black cartoonists and the relentless pressure from Black protest groups, the once widespread practice of disseminating racial insults in the guise of humor is largely a thing of the past." - From: “Crusaders with Pen and Ink - African American cartoonists” Ebony, Jan, 1993

As an appropriate follow-up to the last Ink & Snow post, the above panel from the Cleveland Call and Post is generating some heavy controversy and attention in both the press and on a couple cartooning websites. The paper isn't backing off whatsoever; the cartoon has done it's job insofar as shaking the tree, and now a whole can of worms has started to crawl across the web in response. Some very interesting and valid points are brought up alongside the usual trollish nonsense by the clueless. What causes an awful lot of cognitive dissonance in folks is when they discover that the cartoonist is himself black, which in theory might preempt some criticism by mainly deflecting the charge of racism, but that in turn brings up the ethical fantasy that we live in a colorblind world where everyone is equal regardless of race, gender or sexual orientation, right? Right? Shouldn't we as a country be beyond this by now? Yeah right. Does the fact that this was published in a largely black newspaper that serves a mostly black community and deals with a black person somehow immunize it?

From a brief bio on the creator over on We Need To Stop:

"Walt Carr, 63, might be a candidate for the mainstream press. For years he drew gag cartoons for Ebony magazine and the old Negro Digest (later Black World) while he worked as graphics department chief in the federal government. After he retired in December 1989, he began self-syndicating his cartoons, and today has five black newspapers as clients."

I'm reposting my original comment from the related thread over at The Daily Cartoonist here:

"Have to defer to the insight of Chris Rock (“Shoot the Messenger”) here – great routine and commentary on this topic. Certain comedians from certain segments of society have the right to go where others can’t: John Callahan can make fun of folks with disabilities, Aaron McGruder and Keith can make fun of black culture, Alison Bechdel with lesbians etc. and so on. That’s their prerogative, and if I or anybody else who doesn’t like it just has to deal with it, maybe even learn something about yourself in the process by confronting stereotypes.

That’s why I have a special thing for whites, particularly male heterosexuals, in my editorials, since with my biased perspective I tend to notice that they’re the group responsible for most of the rampant stupidity around me. In fact, pretty much every time I’ve ever gotten slammed for being racist in a panel, it’s usually by disaffected, even jealous, white folks who jump at any chance to vent their impotent white anger, usually from fear at losing their privileged position. That kind of ignorance is usually funny, until it gets into the really sad or creepy/scary comments, like some examples displayed here on this thread.

And this is also why editors are gun-shy about running controversial panels like this – seems that they are the ones who get pilloried instead of the artist: Walt Carr seems to have been around long enough and experienced enough to know what (and why) he’s doing. I looked around but doesn’t seem to have a web-presence, be nice to have him weigh in here.

Like any decent editorial it at least motivates discussion on the issue, or in this case, multiple issues. Being “one of the group” doesn’t necessarily automatically shield the cartoonist or their work from criticism, and they have the same shortcomings as anybody else and aren’t immune from making bad judgment calls either. The best work out there and what I admire the most in other cartoonists is when it transcends stereotypes and makes fun of universal human conditions, but those are rare, and harder to do than picking on people who are different, or maybe just the same as me."

I'd also add that in my experience some of the best pieces from the summer cartooning class are penned by members of a particular segment of society or subculture than effectively have creative license to make fun of their own people. Whether it’s from an Alaska Native, someone who’s gay, an autistic person, a deaf person, a blind person – I’ve had a wide diversity of backgrounds attend - I make a distinct point of encouraging them to draw cartoons that make fun of their respective groups. Even if I don’t get the joke, see the humor, or disagree with the content, my role as an instructor in those cases is to emphasize understanding of sometimes complex issues from different perspectives, and discuss concepts like context, individual and societal responsibility, and respect. But that doesn’t mean muzzling potential controversy or stifling creative expression by avoiding taboo topics – it’s a tricky balance of classroom and professional diplomacy.
As a practicing cartoonist I’ve certainly been guilty in the past of totally blowing it, by not being politically correct but just stupid and insensitive. But the risk of coming across as an offensive idiot is an occupational hazard, deliberately provocative or not. Forgiveness is probably not one of my personal assets, since a significant motivation for me to even pick up a pen in the first place (in the case of editorial panels) is to criticize what I perceive to be, in my own damned humble opinion, the shortcomings of someone or something else. That stands (or in my case, sits) in contrast against the desire to share in a simple laugh with a dumb joke, though pushing the boundaries of what constitutes good taste is a subjective and psychological aspect better left to another post. Fortunately I’m grateful for not only the chance to publicly display the good with the bad along with the ugly, but to work past mistakes and keep trying to do better with each drawing nomatter what the cause.