The cabin crockpot is stuffed with onions, Alaska-grown potatoes and carrots, and deeper down, the side of corned beef is bathed in beer and mulled apple cider... working at home is extra nice on this winter day when the kitchen is only six feet away... 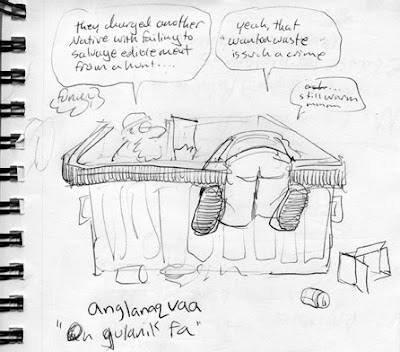 Much as I love to bitch about this place, there are the times when I wouldn't live anywhere else: riding the bus last night I was sandwiched inbetween some dude with an ginormous fox hat that kept nuzzling my face with every bump in the road, and right behind me a couple folks were talking in Yup'ik. Turns out they were a couple UAF students from Kwigillingok (or maybe it was Kulvagavik, or Kongiganak - one of the villages south of Bethel, eh). Well I just so happened to have my sketch book out with a fresh doodle of an editorial panel about a story in today's newspaper where another hunter from a notorious 2008 case plead guilty to "wanton waste." From the Anchorage Daily News:

"Eight men have been charged with wanton waste, failure to salvage edible meat, or both after troopers say they found at least 37 caribou rotting on the tundra outside Point Hope in the summer of 2008."

Now the original case is horrible - that kind of behavior is truly sickening and sure doesn't do any actual, real hunters any favors in the court of public opinion. But sure enough, like flies drawn to a rotting carcass, the racists jump at any chance to come out of the virtual woodwork and begin pillorying the Alaska Native community on comment threads.

Hence the gentle reminder just who the champions are when it comes to throwing it all away... 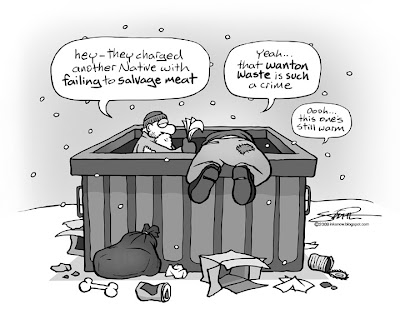 I know I'm a bit of a curmudgeon around the holidays - seeing all the greed and waste upsets my delicate sensitivities. After all that cheesecake anyways...

Oh and the post title & panel caption came from my querying the two guys on the bus on how you would say "hypocrite" in Yup'ik - turns out the translation of "someone-who-says-one-thing-but-does-another" was a bit too long, so we just went with "funny" instead. See the custom phonetic spelling in the above scan from sketchbook if you want to practise saying it under your breath.
I had originally intended to have the parka-dude off to the side in the cartoon, but was edited when the left>right dialog flow didn't make any sense. Plus it was a distracting and confusing element - something to be aware of when one is already dealing with a hopelessly obscure issue. But then in a last-minute reversal I stuck the verbage back in as a caption, for what it's worth.

And after submitting it, my editor misread it as a commentary on the habit of some folks around Fairbanks that use the public dumpsters to illegally dispose of their unwanted game. In fact he was eating some of the moose his neighbor had saved from such a fate - but I think I'll stick with the crockpot.
at 2:35 PM