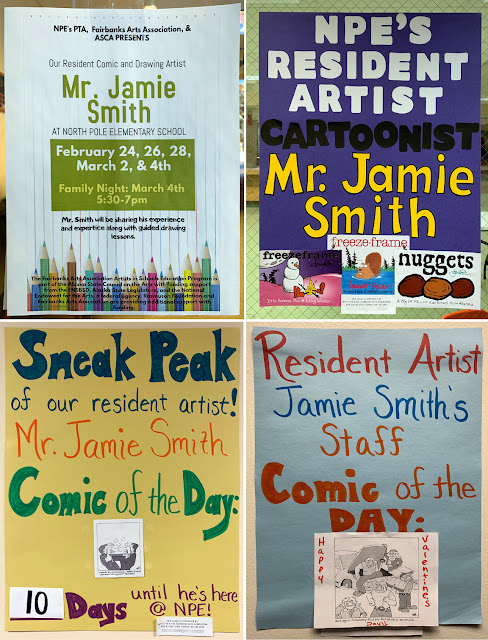 An absolutely fantastic time was had by all with the successful conclusion of another outstanding Artists In Schools residency teaching cartooning to the amazing students out at North Pole Elementary. This was only my second time with this age group (K-5th grade), and so it also proved to be a very educational and insightful experience for me as well. And as you might well guess just based on all the promotional material alone, the sheer amount of behind-the-scenes hard work invested in this gig by my host teacher, Mrs. Alison Koss (In-School Coordinator Exemplar), set the bar as far as accommodation, logistics and support. And while this particular residency was only for one week, it was spread out over a two-week period so as to alternate with my two days a week of teaching my own Beginning Drawing classes up at the university. That made for both a bit of interesting juxtaposition in teaching styles to say the least. It also afforded me the chance to see every single class in the whole school and work with each of them at least once for an hour - time enough for a quick show & tell, a demonstration and a series of exercises. 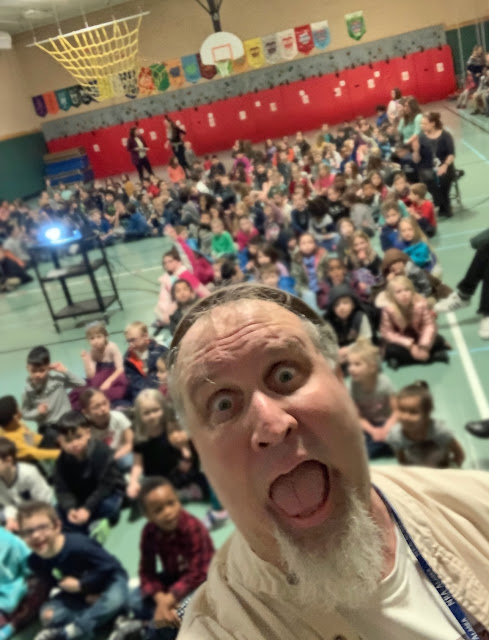 Everything kicked off with an school-wide assembly in the gymnasium as a way of introducing myself and my work to everybody. I admit to being really nervous at this level of public speaking (over 400 folks) since I'm supposed to be a visual, not performing artist - not that there's all that much of a difference when I get excited about cartooning. I showed some samples of my work, and since the official school mascot was a husky, I focused on my depictions of dogs over the years.

And as it happened, this time of the season was right in-between the two biggest major dog-powered sports events of the year - right after the Yukon Quest and before the Iditarod. So I could pivot briefly to the different breeds traditionally used in mushing, and inject a bit of history. Then we finished up with a rousing call-out session naming some of the famous canines in cartooning and animation. 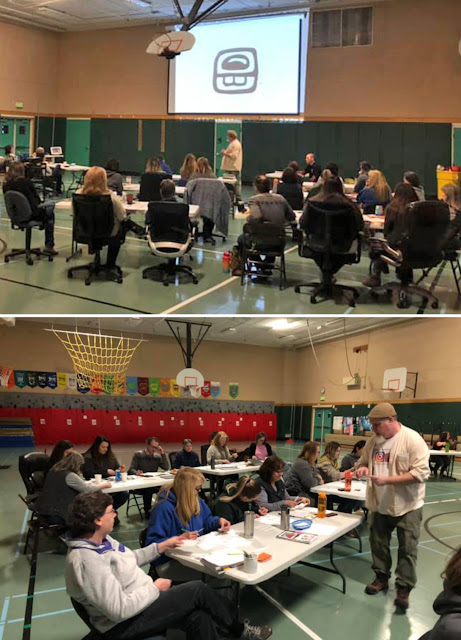 The previous week, at the kind invitation of the principal, I also participated as the warm-up/comic relief for the day of Professional Development workshops. That was an opportunity to spread the cartoon gospel about the legitimacy and unique potential power of sequential art to a group of about fifty faculty, and after the requisite introductory samples of my own work and creative process, I had a handout of additional resources for an interested folks to peruse at their leisure, and also had a table with a portfolio + examples of contemporary graphic novels. One nice highlight was Jerry Craft's "New Kid" just recently becoming the first graphic novel to win the Newbery Award, along with representatives of previous National Book Award nominees and winners and other prestigious awards. 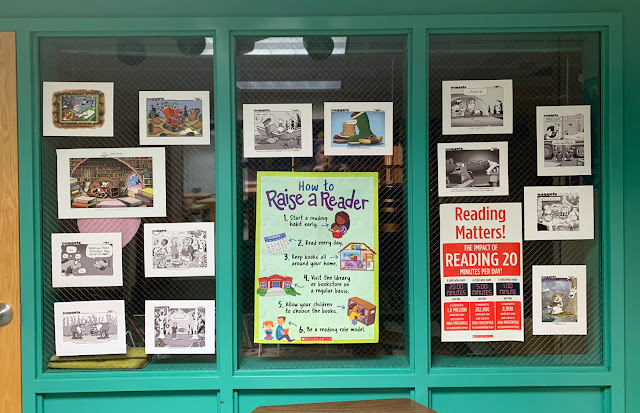 Speaking of books, my base of operations was directly across the hall from the library, which sported a spiffy display of Nuggets cartoons along with the featured poster which incidentally punctuated the residency with the benefit signing. Besides borrowing a temporary model for my classes (a giant stuffed malamute), the super cool librarian was a great source of literary insights - can't emphasize enough how much of a crucial foundation libraries are to any educational institution. 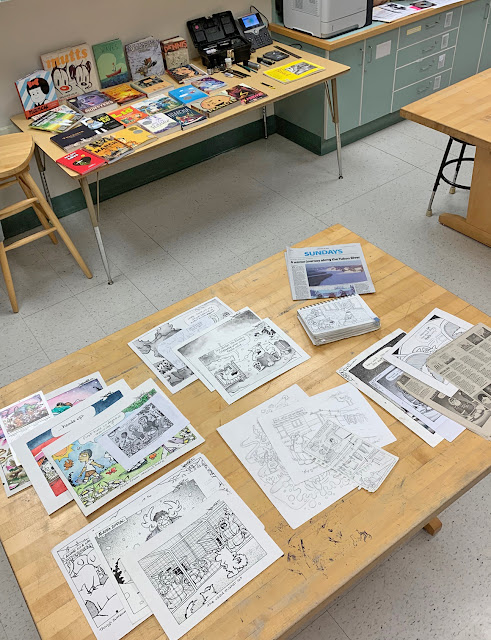 I was housed in a dedicated space for the duration - an art/science lab, which let me have a dream room setup to set aside tables for ideal display, demonstration and working. Each teacher would show up at the allotted time with their class, and I could briefly run over the itinerary,  cover the materials + techniques, run through a portfolio to show examples of professional work, process pieces and originals. 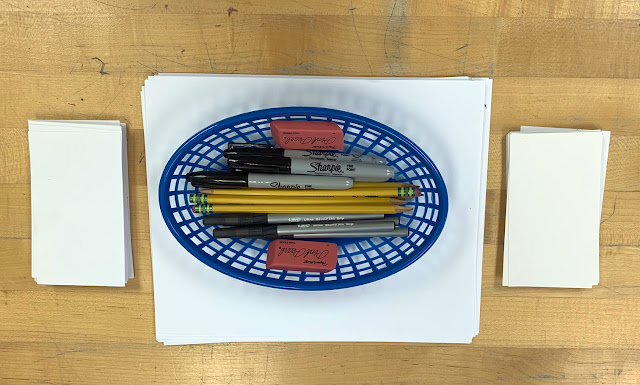 Materials were as simple as ever: basic tools of the trade including a #2 pencil, a black-ink ballpoint pen (for fine-line textural details) and a Sharpie. Throw in a shared gum eraser, a stack of copier paper for practicing/warm-ups, and blank index cards and you have everything you could possibly need to begin creating characters, building and exploring your own world, and telling your own stories. 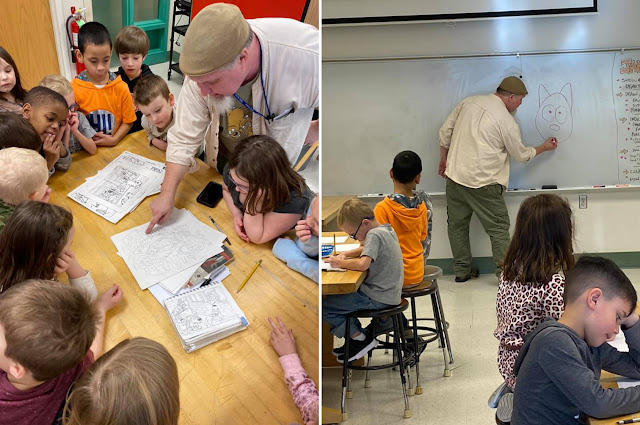 Then it off to the (dog) races: we first started with simple shape to render a basic husky head, but the fun really began when assigning individual personalities through expressions. Here again I got to experience the magical moments of creative synchronization with a group of people all intently focused on making their own marks, as evidenced by that poignant (non)sound of silence: a comparatively brief lull in classroom noise when everybody is focused intently on the task at hand… it’s a tangible, palpable presence almost as loud as the excited chatter, a blissful oasis of art that would unexpectedly open up amidst the normal noise. 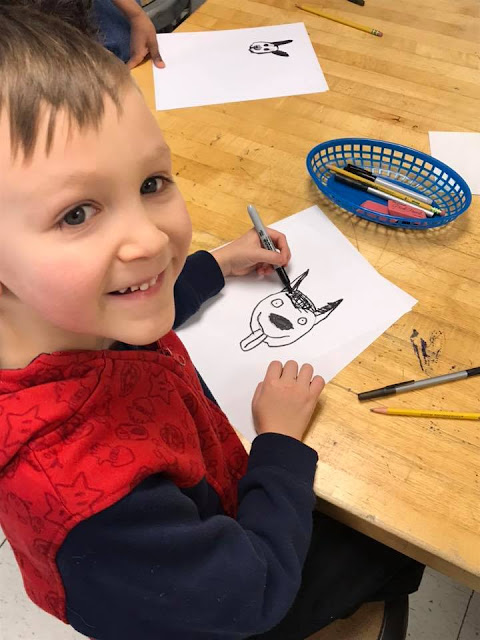 Then there was the awesome interludes of call-and-response when I would make a mark on the board – drawing different lines for an expression on a character – and hearing an instantaneous reaction from the audience. That artistic connection is so precious and rare especially for someone who normally labors alone. 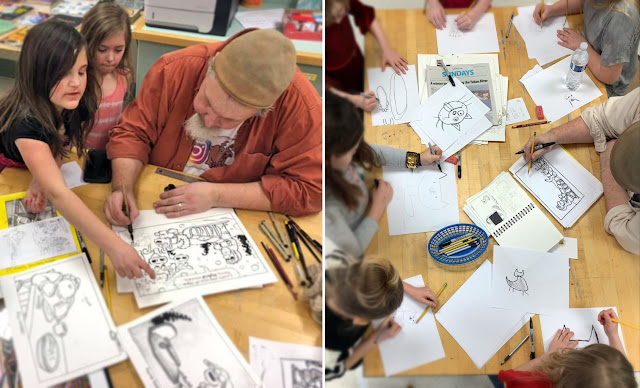 And just as a side-note, it wasn't strictly all dogs all the time: there was an enthusiastic group of young girls during open studio who decided it was time to let the cats out. They also had some fun collaborating on hooking up their respective puppies to form some hilarious teams.

The forty-minute commute gave me some time to get psyched up in mental preparation, or conversely, reflect upon each day's events. One surreal moment happened for my very first class - everybody showed up fully dressed for the current outside temperatures of -40°F, which happened a few time over the course of the residency. I learned that was standard operating procedure for "red flag conditions," which for safety's sake also meant cancelling outdoor recess during lunchtime whenever it bottomed out at twenty-below zero. Which led to the second moment of unintended hilarity upon hearing the principle announce over the PA system that "ladies and gentlemen the red flag has been lifted since it has now warmed up to minus eighteen." 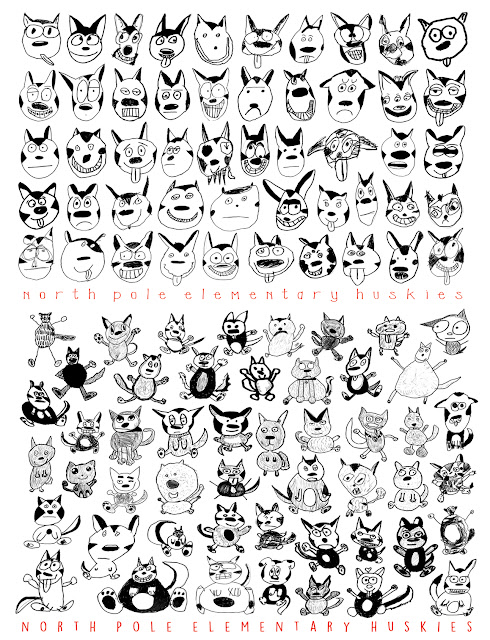 Here's a set of four posters, two horizontal and two vertical, made from snapshots from only a small selection of the incredible diversity of dogs that were on display. They literally illustrate how much artistic individuality can evolve even when ostensibly drawing along with the teacher. 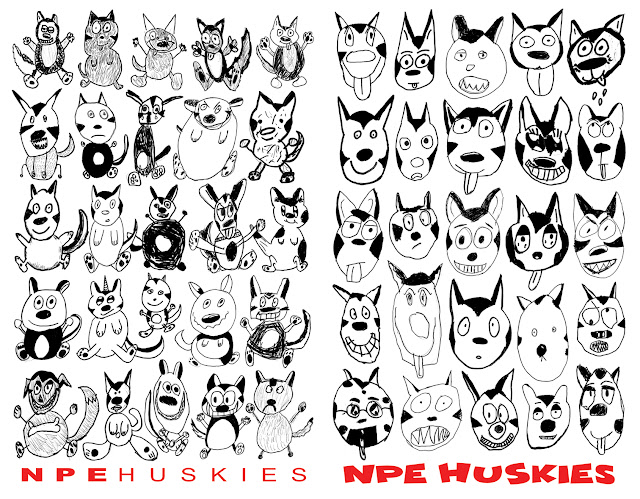 Once again these drawings demonstrate how every single puppy is wonderfully somehow different. They're all individually unique, each one distinctive in it's own way, and everybody's got their own style. Hey - what a meta-lesson. 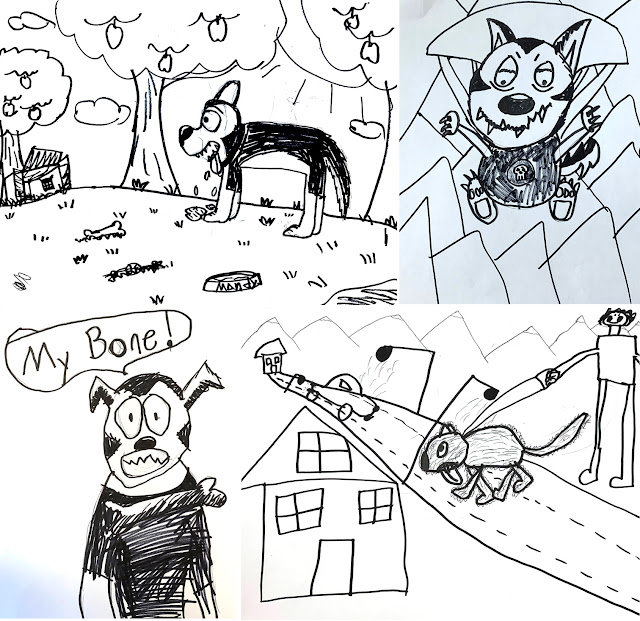 After a husky head we would next work up a sitting dog, and then either one or two additional drawings based on those two images would be recreated - this time on an index card (as opposed to a sheet of copier paper), which we then collected (more on that sneaky bit of subterfuge in a minute). Lastly we would then incorporate additional elements in response to a series of "what if" questions: Is your dog in a grassy backyard, or in the snow; in a doghouse or dog bed; does it have any buddies; what kind of toys or other props are there (ex: bones, waterbowl etc.). 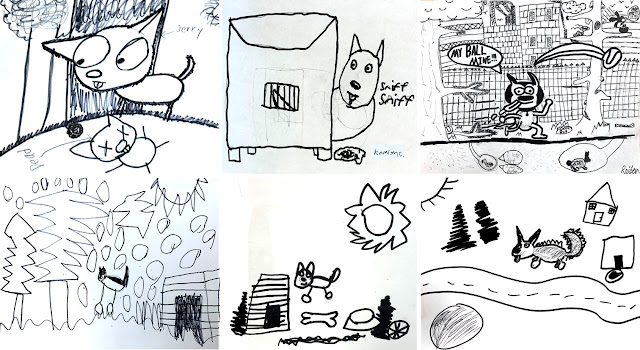 What kind of noises does your dog make? Can your dog talk and if so what would it say? What's it thinking? If we would have had another week to the residency and/or a second session this information would have provided us with all we need to begin creating narratives and strips and so on. 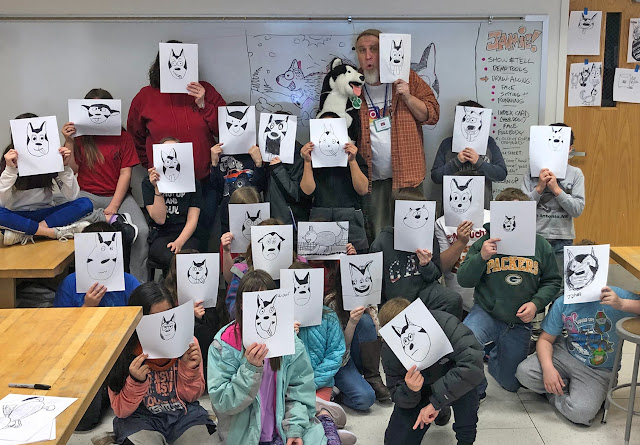 For closure we would gather around for a class. er, pack picture while holding up the husky heads as a hilarious sort of mask, and on the count of three all begin howling in unison - quite the cathartic release to an intense little class. Oh and don't forget to clean up your tables... thank you! 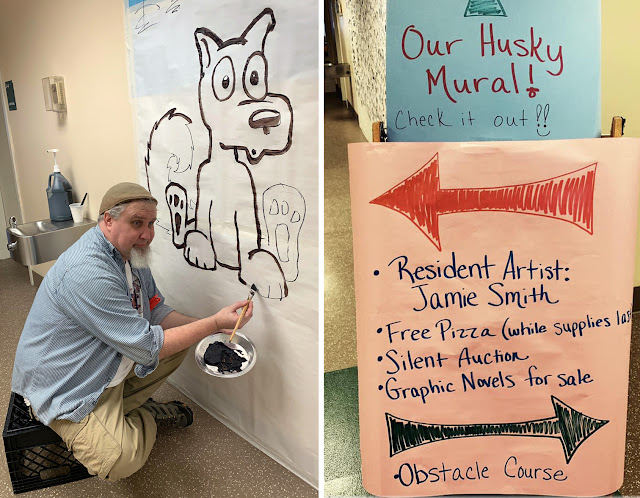 After my final class there was still a few hours left to prep for one last event, the PTA Family Night.  This was a chance to meet many parents and families of the students and introduce myself and show off their kid's individual efforts and newfound skills. 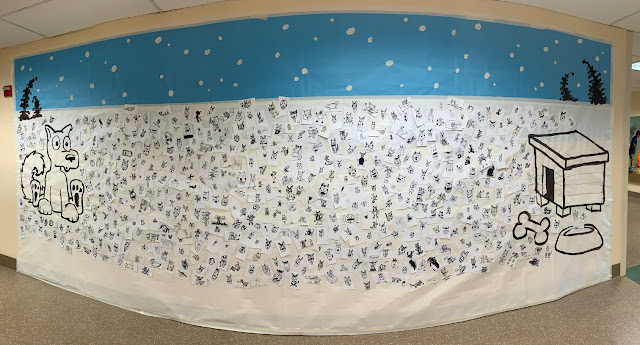 But the capstone was of course seeing the culmination of our collective efforts in the unveiling of "The Dog Yard" hallway-length temporary mural installation. Finally getting to see hundreds and hundreds of huskies all up on the wall was such an epic accomplishment, and their collective presence was a meta-lesson in community and what can be accomplished all working together as a team. 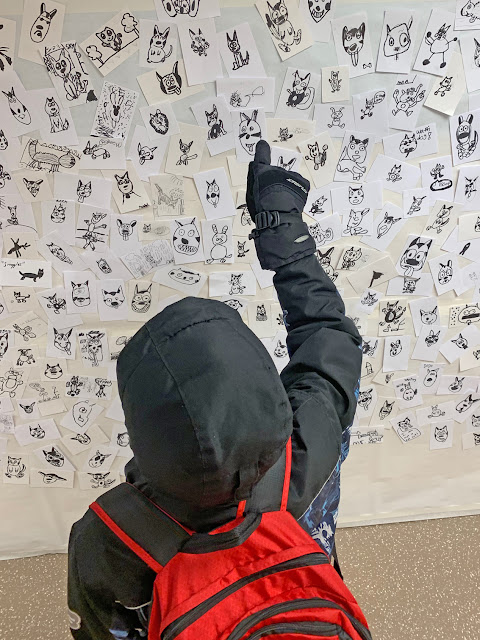 Here's an attaboy to the folks who made this residency possible, the Fairbanks Arts Association, and through them the generous funding from the Alaska State Council of the Arts. One major wagging of the tail goes out to my omnipresent studio assistant, NPE PTA president Kaylin Hart, without whom this residency would have been twice the work, as she attended to so many details and kept me fed + watered throughout - and provided much-appreciated feedback and input on my many questions and insecurities (and took half these picture too). Also a big bag of biscuits to the entire faculty, staff and administration of North Pole Elementary, who were unfailingly helpful and kind and considerate. Every single time I visit one of our district's public schools I am simply astounded and humbled by the passion + time + energy these folks do for our children and our community. North Pole Elementary is an amazing team - thank you all! 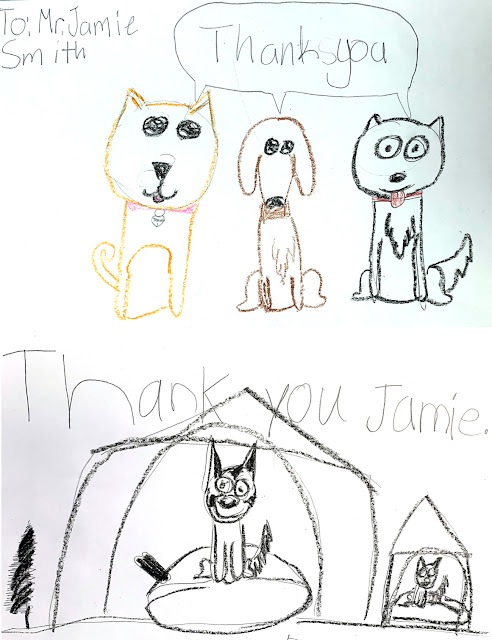