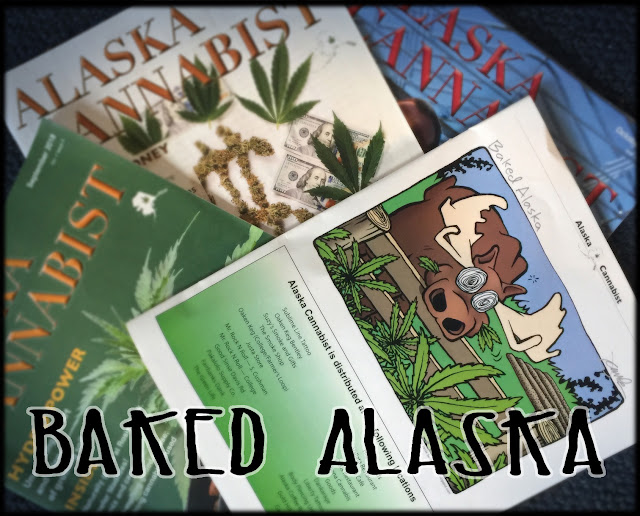 Here's a second installment for the, uh, budding feature as published in the Alaska Cannabist magazine, which has been generating quite a buzz amongst the local industry.


This one in particular I was quite pleased with everything, from concept to execution. Kinda botched the watercolor phase, but on the other hand, the digitally colored one will be a flagship product on tshirts + mugs... stay 'tooned for future posts about upcoming merchandise opportunities. 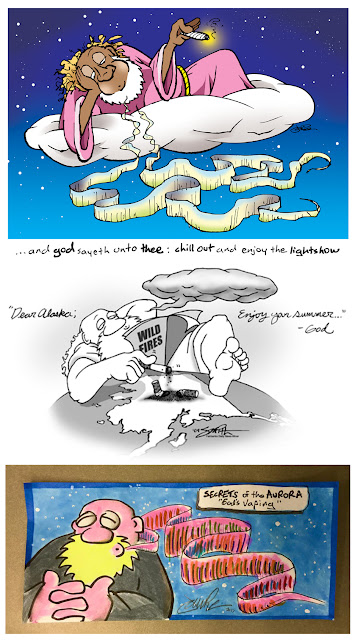 Each of these three different concept drawings were spaced out over five year intervals, with the first one just a random concept done for no reason whatsoever - it actually turned up by chance on an unrelated search through the archives well after drawing the new variation - I had long forgotten about its existence. The last one had been doodled out on the sly while working at a recent job, using the office materials at hand like a medley of highlighters, a Sharpie and old bottle of white-out. So sometimes the mulch-pile theory of incubation until an idea is ripe enough to harvest is an accurate way to think about these long-term processes.

As an interesting aside, the middle panel actually getting published as an editorial, incidentally generating some irate letters-to-the-editor. When I created the Baked Alaska version, the assumption was that the demographics for the publication were presumably pretty relaxed about heretical depictions of higher powers.


With this one I finally settled on a customized variation of the font, which evolved from initial lame-ass penciled version that was done on the spot in a panic over needing something as a placeholder.

The comparatively detailed compositions of interior spaces proceeds apace - a challenge when consciously constructing clutter is randomizing enough elements to "fill in the blanks" as it were, without creating an imbalance that results in aesthetic incoherence. Don't have to look very far for inspiration or reference for such organized chaos - it pretty much depicts my own surroundings at the studio.

Ooo - kitty! That's my very first cat, Sneakers, who was an extremely large and loving companion for many, many years

When it comes time to color these in (one client has already reserved the first year of originals in advance) sometimes I kick myself on getting carried away with all the details. Usually something like around a minimum of two-dozen different colors get applied. Quite the contrast from the normal shades of gray, but then again this is another example of me operating well outside my habitual comfort zone. Like, whoa dude. 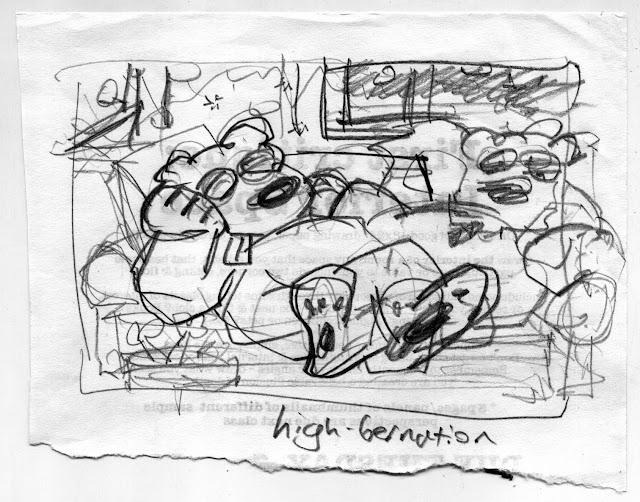 Now this one I got really excited about, at least as far as concept-wise - almost bummed about not being able to "double-dip" and have this appear as a Nuggets. It's that good I thought to myself - followed quickly by the realization if you have too many proverbial irons in the fire, well then it might be time to get a bigger forge, and turn up the heat.

Also, as with the first initial four in the feature (shit-eating grins), an obvious pattern developed in retrospect: the reclining on a couch theme. Have to nip that in the, er, bud.