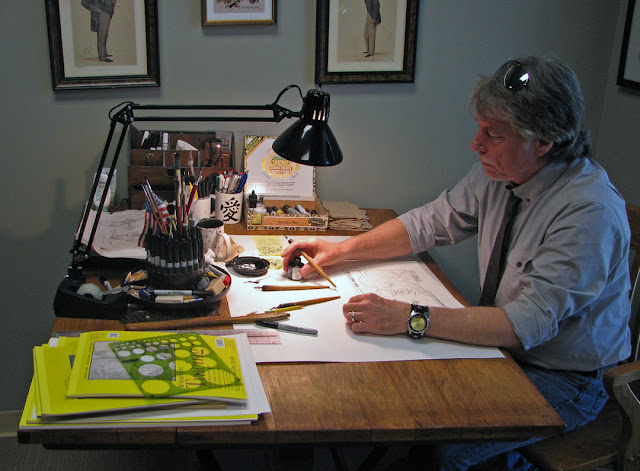 Twenty-four hours before leaving Savannah I took a last-minute opportunity to visit with Mark Streeter, who was very gracious in setting aside an hour of his time on what is the busiest day of the week at his job as the staff editorial cartoonist for the Savannah Morning News. Fridays are crunch-time for the funnies, as Mark puts in five days a week, but his panels run six days, necessitating a double-hitter at the end of the week. A member of the Association of American Editorial Cartoonists  his work is routinely among the featured artists represented in the annual Best Editorial Cartoons collections, and here is an archive of current work displayed at Savannah Now plus more samples on Cagle Post.


A life-long resident of Georgia, Streeter grew up on Tybee Island, and his roots cypress knees are sunk deep in the community, which is in turn reflected by the awareness, sensitivity and connectedness of his drawings. Since both his father, and grandfather before him, were also in the newspaper business, one could say the printer's ink runs strong in the Streeter veins: right out of high school Mark began worked at an entry-level position for the Savannah paper in the engraving/platemaking department. Always wanting to be an editorial cartoonist, he started covertly adding in his own panels on the proof sheets of the editorial page - as the cartoon panel was the last page element added there was always a convenient blank space -  and in this way his work caught the eyes of the editors as they proofed the page. In 1984 they finally ran his first panel, five years later found Mark moonlighting as a freelancer, producing three to four panels a week in the Evening Press edition. In 1992 a full-time position was created, which now sees him, thirty-seven years later, occupying one of the relatively few staff gigs in the nation associated with a newspaper as their official editorial cartoonist. Mark is humbled with the awareness of how exceptionally rare and lucky it is to have such a position, especially with a comparatively smaller-sized paper (approximately 75k Sunday circulation). But given his skill and passion, it's mutually advantageous: both the readership in Savannah and the publishers are extremely fortunate to have such a unique caliber of talent employed at their paper. This particular publication seems to be bucking the nation-wide trend where far too many newspapers are effectively racing to the bottom, aided and abetted by the cannibalistic business ethics of the syndicates, continually undermining and devaluing the cartoonist's trade.


Along these lines Mark's advice to folks starting out in the funny business is to "take 'em what they can't buy" - as local content is still a distinguishing aspect for a successful newspaper. This rewards of such an approach are obvious upon arriving at the stupendous new building for the Savannah Morning News: eight years ago when I first visited Streeter at their previous digs in downtown Savannah, his office was about the size of a closet. First thing I noticed in his current studio was the beautiful antique "Hamilton Economy" drafting table, which I promptly geeked out over by crawling around underneath it (same design as the hundred-year-old one I have in storage up in Alaska). Not to mention you'd think with all the new room there'd be a corresponding sprawl of the usual artistic clutter, but Streeter's lair mirrors his work: clean and well- organized but with touches of interesting detail. 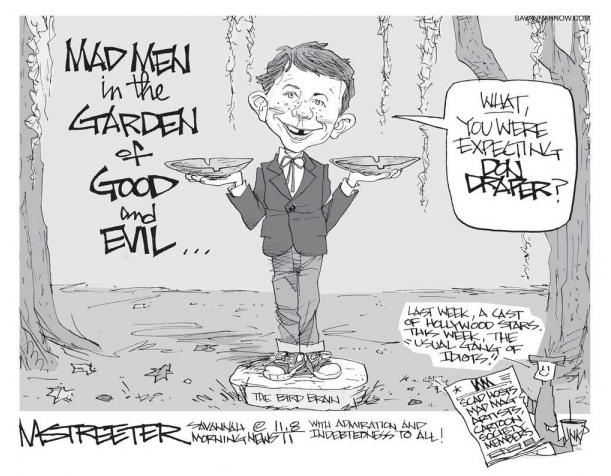 Above is great example of one of Streeter's panels, showcasing his easy, loose style of contour line and distinctive lettering. Needless to say his pun on Alfred E. Neuman as the Bird Girl Brain was a huge hit in the Sequential Art department after the recent SCAD MAD events. Armed with an impressive array of Sharpies, dip-pens, inkwells (Phil Martin's Bombay Black) and a stack of Strathmore, Streeter first pencils his rough designs on newsprint and/or tracing paper before lightboxing the final composition onto 11x14" watercolor paper. In this way he can later complete the piece by had using ink wash for adding value to the original, but first, the linework is scanned into the computer where he uses a graphics program that I hadn't heard of - MultiAd Creator software  - to add in a range of halftones for the print version. 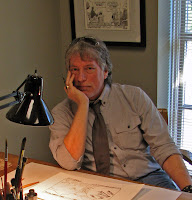 Mark mentioned how oftentimes the easy part is when "you know what you're going to draw, just not how you're going to draw it." There's "no quota" as far as the ratio of local issues versus national topics, the content of Mark's panels are purely "news driven." One of the comments he made regarding the occasional aspiring talents who visit from SCAD that express interest in becoming an editorial cartoonist is how one of the particular, defining attributes of the profession is being a "news junkie." Even if one can draw, it doesn't necessarily translate into being an effective editorial cartoonist (as opposed to say, an illustrator). Streeter says it's a "24-hour mindset" that means working "not just in the office but all the time" where one is "trolling constantly" - be it watching television broadcasts, listening to radio programs, or reading websites and newspapers. Paradoxically many of these mediums have had a debatable effect on editorial panels, as political cartooning now faces competition from the plethora of different "avenues for satire," compared to back in the day when the editorial panel was the primary source of such opinionated entertainment in America. Nowadays "everybody has their own outlet," and unfortunately this has led to the current sad state of affairs in the hostile, confrontational and divisive style of discourse that stands for debate. All one has to do is skim the comment section of any news website to see examples of that in action.

Often providing a counterpoint to the prevailing position of the paper, Streeter sees his task is to either "illuminate or reflect" upon an issue, and the dynamics with the editors of the paper is one of a long-standing partnership: he "doesn't tell them what to write and they don't tell him what to draw." This symbiotic relationship is partly from practiced professionalism (as per Tom Richmond's "works well with others" factor), and a respect for his obvious skill. Evidence of this accomplished ease and trust in his trade is that "it's rare that they get spiked"-  at best only put off, timed so as to not conflict with a stance of an editorial position published on that particular day. Easily approachable, and only an email or phonecall away from the public, the publisher, editor and Streeter himself are always aware of the impact, effect and connection his work has with the newspaper's readership. Mark recounted the satisfaction he has from hearing or seeing firsthand the appreciation someone has, often years later, for something he had drawn that touched them personally. This is always a special occasion, since he noted the occupational trademark of working in isolation, and it often seems the only time anybody bothers to offer feedback is when they are either offended or don't get the point of the panel. One of the fringe benefits to doing six editorials a week means he is occasionally afforded the luxury of catering to a comparatively smaller audience on a topic or issue that is of particular relevance to only them. This fosters an even more intimate connection with the community, which ultimately serves to tighten the publication's pertinence and relevance.

A true veteran of the volatile fortunes in the print industry, Streeter is currently on his fourth different publisher (yet still working with the same editor): over the years this time in the proverbial trenches shows he knows hat works and has staying power. Students of sequential art in the area would do well to learn from the wealth of experience that Mark has to offer, and duly note the habits and discipline of an established talent in the medium of cartooning. It was a kick in the creative pants to visit with him, and it made for a perfect capstone for my creative encampment in Savannah.
Also check out his book of collected works: "Direct Hits and Cheap Shots: It's all a matter of perspective."