You Missed A Spot 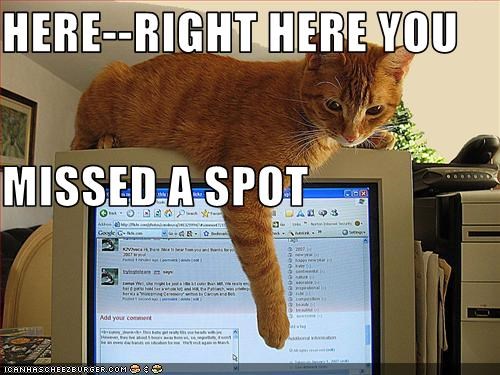 I recall a couple years ago busting a student in cartooning class doing something dirty on their laptop. While walking around the room checking up on people's progress with their projects, I saw that she was *gasp* zoomed in on a page... and doing artwork at the one pixel-width level. Cue obscure Episode IV quote from the weird art teacher...

Now that's missing the big picture. Which is not to say that I'm not guilty of the same - it's easy to get tunnel vision especially with digital blinders. It merits mentioning, not just on a content level, but really... nobody cares. The details are lost on the majority of readers, not to mention the physical limitations of most media render it moot - HD aside. Maybe a fraction of folks are obsessive enough to critique at the molecular level (it's an aesthetic hallmark of printmakers and photographers), but there are more fundamental concerns that ought to command attention - time suck to say the least.

Just the other day on a recent panel I zoomed in and scrolled around to see a disheartening array of specks left all over one of my cartoons, just before starting to shade in the grayscales. This visual littering, if you will, is on account of two factors: one, I'm a slob; and two, the leftovers are from not setting a proper threshold level before converting my raw scan. It's usually at moments like this that I really miss Freehand (from back in the day) and even Adobe Streamline (even farther back in the realm of antiquities), but I abandoned vectoring my linework many years ago, which has incidentally had a more authenticating effect on my work, since there's no subtle stylistic homogenizing of the image.


Anyways, the above image is an example of the level of detail on four separate areas of an example panel... each at 400%. You can plainly see the offending marks - two panels contain one speck each, and the other two contain two specks each. Trivial? Yes - but at the 300dpi level there might be some ghosting or haloing effect from these tiny hiccups which could potentially create a slightly noticeable irregularity. Far more likely it's just a factor in the perceived psychological purity of an image, as it upsets the harmonious equilibrium that all pen + inkers seek, rendered in binary black and white. Also these protracted search & destroy missions serve an invaluable role in ramping up production with headphones on and slurping the day's first cup of coffee... "top level no mind."

Below is one of those sample specks zoomed in even more, to 3200% - the size of a single pixel. It's like the point of singularity contained within a cartoon... all I need is a blacker black. And if and when I ever breach the event horizon someday while working in the studio, then I'll spend the rest of infinity laughing along with Kazimir Malevich.

Email ThisBlogThis!Share to TwitterShare to FacebookShare to Pinterest
Labels: Process