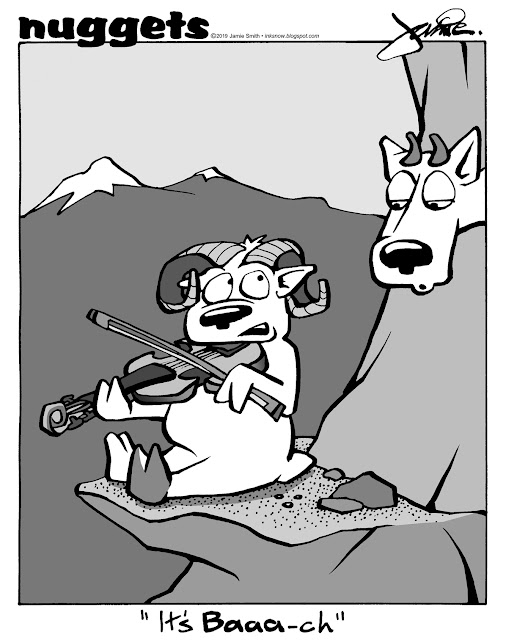 It's been extensively documented here many times before what provides the soundtracks and backing score to my work. Plus I go through phases, particularly with regards to classical music. I realize my tastes are fairly standard - the equivalent of my enthusiasm for prog-rock (ie Rush, Genesis, Yes).
But, really - I mean, just look at the damn cartoon. "It's Baaa-ch"? Seriously? After coming up with that, you think I really give a fuck what other people think about my taste in anything?

Mostly as a matter of default I've had a very long-running preference to orchestral Wagner, and then the occasional obsession with Mahler, and every so often Beethoven goes on heavy rotation ("Pastoral"/Symphony #6 - especially the first movement/ Allegro ma non troppo - holds a very special place in my heart).

Another go-to composer is Bach: the Brandenburg Concertos are the only cassette tapes I blast besides bluegrass in the burgundy Subaru station-wagon. Yeah, I know, what a badass. And of course, if the first thing you hear in the morning is the St. Matthew Passion, then the rest of the day will be filled with miracles, even if nothing else ever goes right with your life.


This year brought an unexpected surprise: for many months on end I was waking up - very early, say, 5am - and plugging into intense sessions of Mozart with the headphones. Try a shot of the first movements of both the Symphonie Concertante, followed by Symphony no. 25 in your coffee. I mean, hell, if it works for plants, than you should see how hard it kicks a barely sentient cartoonist in the creative ass. I have over ten hours on this one iTunes playlist, mostly concertos for the long haul, pacing out the passion at the drawing table. 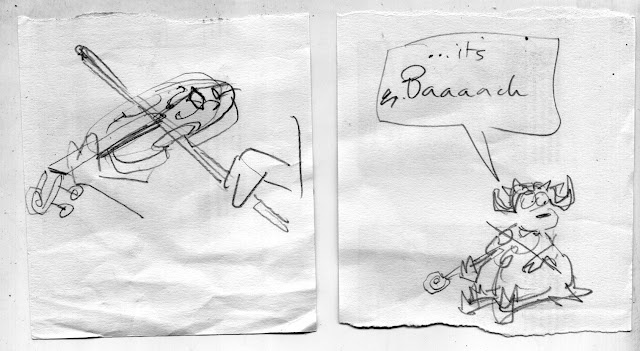 Here's the watercolored version, which I was apprehensive about since such vast areas usually are a challenge to wash, so I wasn't particularly looking forward to ruining another original. Given the nature of the medium + material I'm not usually happy with the aesthetic results when it comes to such open spaces. But this was the last piece at the end of a very long day of finishing off several sets of stuff for sale, and instead of paralysis-through-analysis I just grabbed a brush and a handful of pencils and went at it. As oftentimes happens that was the correct approach and I lucked out on the choices of color, the blends worked out, and a last-minute command override decision on adding flakes improved on the piece. Enough so that it bumped off the initial digitally shaded one... oh well, no big loss in time "wasted" as such dry runs serve a purpose as value studies at least. And it's all good in the end, a rehearsal of sorts that works whether one is a prodigy like Mozart, composing by age five, or an epic capstone in the league of Beethoven's 9th... practice, practice, practice. 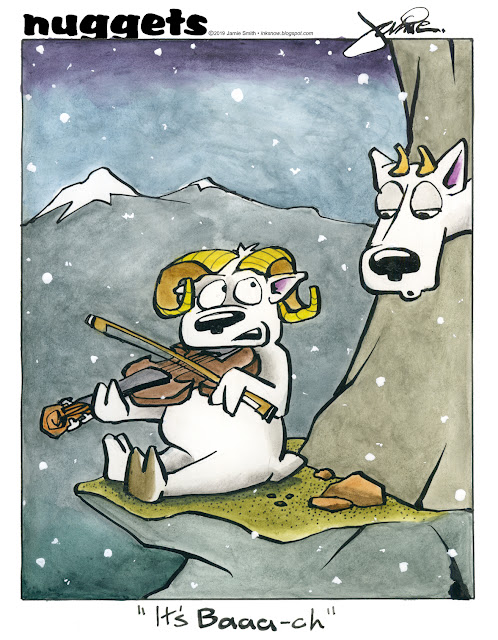