Since scoring the gig at the upcoming MeCAF, I've culled some samples from the batch of recent work to put into a little minicomic booklet, so as to have something else besides a bunch of books from Alaska that nobody will understand. After settling on the all-important title (which, if I ever open up a bookstore here, will definitely be the establishment's name) there was about a week of juggling different layouts and proofing printer's dummies before essentially giving up and calling it good enough. When the initial thumbnails start to resemble a football play-by-play it's time to move it onto the computer. 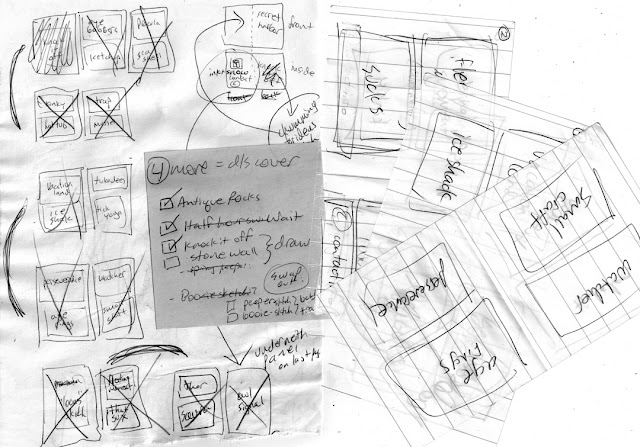 (more after the jump)


Proofed up some samples from a local print shop - Down East Graphics - and was more than satisfied with the image quality and price. Some particularly winsome panels were pulled and compiled into little handouts comprising of eight different black & white gags (4-up on a sheet of letter-sized paper, then cut into quarters) and a couple color ones too. The cost is negligible: 2.5¢ per b&w and .12¢ each for the color panels, each sporting a tag line in fine-print with contact info. The goal is to get as many as possible into the hands of passer-bys, in hopes of maybe a small percentage being curious enough to visit here, or possibly even follow-up with some other opportunities. You never know, and it never hurts to chum the water. 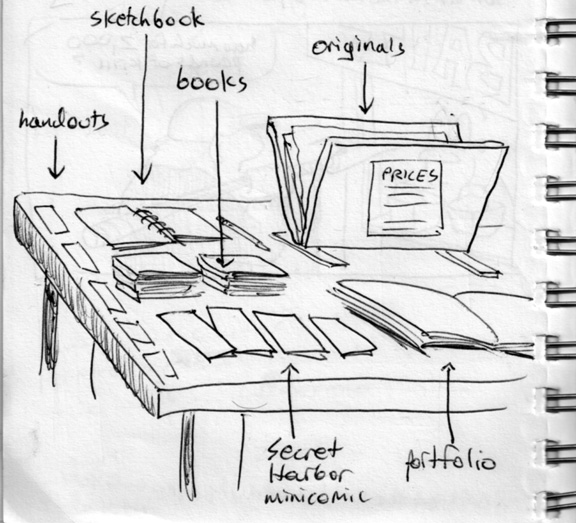 So far I figure on having just enough real-estate to display a handful of items: a portfolio out for folks to peruse; a stack of books ("Nuggets" and "FreezeFrame" compilations), the minicomic, a rack of originals, and lastly free sample panels. There might be enough room left over to draw some demos, or at least doodle in a sketchbook, though given the organizer's estimate of last year's gig of around a thousand people in attendance, there more than likely won't be much if any down-time in the six hours of showtime. Mainly it's a good goal to offer a full spread of merchandise that meets a range of budgets: from completely free, to pretty cheap, some mid-priced items, and comparatively expensive. Logistics prevented the printing up of any t-shirts, but at least my partner and I will each be wearing demos from the print-on-demand store, and any interested folks will have all the relevant info available on the handouts. And plans are now in the works to utilize a local silk-screener to print up a batch of 5-color versions of some panels.


Not to be obsessive or anything, but since the space is tight (4' section of a table), and so is the limited setup time, I sketched out some ideal layouts. Remains to be seen how well it correlates to reality. In the meantime PDFs for the minicomic were dropped off at the printshop, that is, as soon as I quit with the endless revisions. Also the longer the project took, the more material I generated in the meantime, which meant expanding the page-count right up to the last day. Also the estimate from the printer necessitated a last-minute change in plans as far as assembling it: quoted finishing costs more than doubled the price-per-unit. So I paid for just the copying (100 each of three four double-sided pages + a double-sided coverstock) and did the collating, folding and stapling by hand at home. This in turn necessitated investing of one of those long-necked staplers ($30 at... Staples). A new table-cloth and a couple display racks and it's off to the races.

Funny how no matter how many times I've been through similar gigs and no matter how much experience one has with shows, presentations, etc. there's still that little voice in the corner that keeps heckling at the level of self-confidence. But as I jotted down in the journal the other day, "at some point you just have to go with what you got," and just like individual panels, enough's enough, call it good and move on to the next project. Farting around with page order or panel size and/or all the exponentially increasing number of details can swamp it into being effectively DOA.
I also recently wrote in the sketchbook "even if you strongly suspect that you're only third-rate, that doesn't mean you should ever stop" and "even when you are only second-rate, it still doesn't mean you ever stop." I assume the same still holds true even when you are the best. The vast, overwhelming amount of time none of the above even matters to me personally, as I tend to ignore things and go ahead anyways. Which is either willful ignorance or incredible confidence, or an amalgamation of the two. Point is, one thing I've learned over the years is to basically ignore the inner critic, at least long enough to take the flying leap. And regardless of what anybody ever says - good or bad - it should never stop one from producing work, or from putting it all out there anywhere and any way you can.
And hand-in-glove with the internet, minicomics are the best way to do it: "Secret Harbor" is an example of a low-cost alternative to traditional publishing. Even as a black & white stop-gap measure before compiling a more finished product, this gets your work in people's hands, on their coffee-tables and in the outhouse. Via the Comics Reporter here's a great article on creating them and here's some reviewed samples (also check out the work of a friend of mine, Max Clotfelter on his blog Snake Meat who is an accomplished minicomic maker).
at 3:25 AM