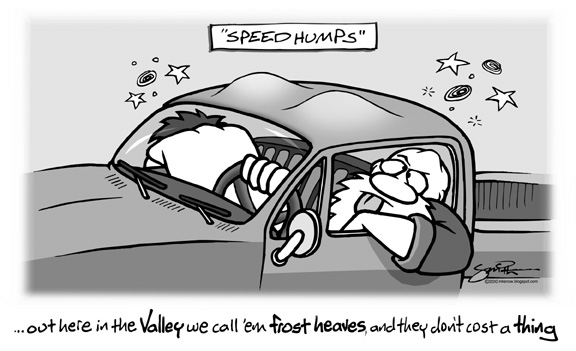 A residential neighborhood in the more civilized part of town will undergo major renovations this summer: DOT is planning to install, among other traffic revisions, a kinder, gentler variation of the traditional speed bumps.
From the Fairbanks Daily News-Miner:

"In addition, street changes and safety improvements in Hamilton Acres and Shannon Park will include 75 traffic humps and 6 traffic circles on neighborhood streets. [snip] Various “traffic calming” actions are proposed, all of which are designed to get people to slow down on streets where there have been many complaints about excessive speed."

Anybody remotely familiar with the urban topography of Interior Alaska, in particular around my neck of the woods, the Goldstream Valley, will shake their heads at the $1.9 million dollar price-tag. Especially given the Promethean and logistically futile task of maintaining roads across permafrost - Mother Nature uses 100% organic method of slowing people down. A little.
Also posting a scan of what the print-version looked like: how nice to share the page with the mayor! The opinion page is often the equalizing arena where even some schmuck from a cabin can vent alongside other community perspectives. 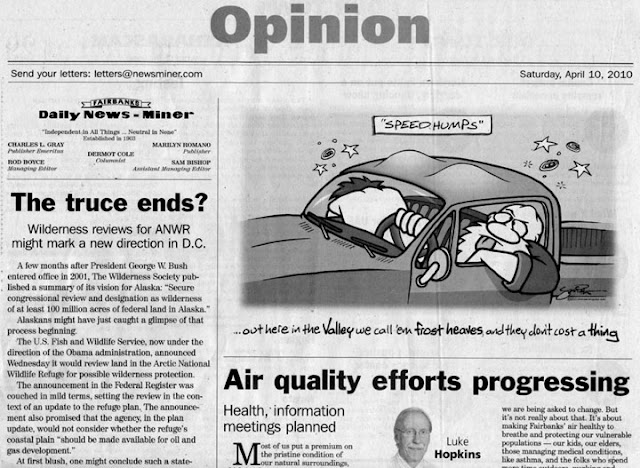