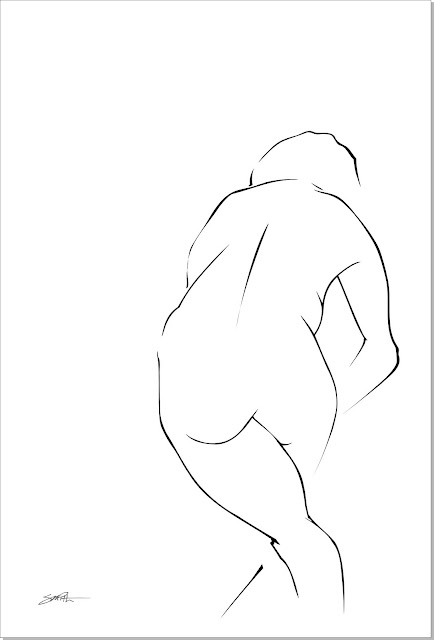 "What I do is create images, period." - Frank Frazetta

"New Media - Art via Digital Technology," a statewide juried exhibition that I successfully entered a couple pieces for the innagural opening last year, has come about again. This time I realized an idea that'd been percolating away in my head for quite a while: to print a series of my figure drawings life-size.

Along with other categories such as animation, CGI, digital painting etc, there's the "Computer Manipulations of Traditionally Created Art," which is what this body of work would fall under. They wouldn't fit under anything else in most other shows - but there's an irony in that these pieces in particular don't ever really "look" like computer art, which I'll explain more about later. It's a calculated risk whether or not the juror will be able to even recognize, if not fully appreciate, exactly what went into the creation of these pieces - to say nothing of the intrinsic gamble over works that are nudes and decidedly not very postmodern. However, artists are encouraged to provide information about their submitted pieces and so I taped up this statement on the backs:

From an original figure drawing - ten minute gesture with a model - done with Sharpie.

• Modification of drawing in Freehand by editing paths & points: stroke attributes, deletion and changing types of points and path segments from anchors to curves through manipulation of handles). Work is done at 400% magnification with constant zooming back out to 25% to maintain consistency in the overall design.
This takes several hours and reduces the total number of points from over 500 to approximately 150.

This process of digital recreation refines and improves the original drawing and preserves the gestural spontaneity and organic quality of the line.

Seems rather laborious, and it is – but I have such an obsessive fascination with line, that while working on theses pieces I fall in love with the drawing all over again.
I get (or, actually I don’t “get”) statements like “why go through all this – can’t you just draw it that way to begin with?” that ranks right alongside “why do you bother to draw anyways?”
The computer is just simply another tool with which to manipulate the line. The selection and modification of each individual point changes the relationship with the connecting points, and one becomes extremely aware of the total network that comprises the big picture. Balancing deliberate control with the "happy accidents" makes for an unplanned evolution of the overall image, and is exactly the same process when working in any other medium. In fact, I’m secretly thrilled to travel a huge creative circle and arrive back at the initial starting point of a gesture drawing that in many ways is superior to the original. To me these look like some sort of figurative calligraphy, not to mention the sheer scale of the finished prints really take on a presence.
Figure drawing in many ways is one of the purest expressions in art and the incorporation of a computer into the creative process in no way diminishes it. Unfortunately a lot of computer art has the tendency to look like a computer did it, so making the marks retain the quality and leave an impression of being made by hand is a subtle but important achievement. In my own damn humble opinion, the final linework is strong enough to stand on its own as a designed composition that needs no additional digital embellishment: no trippy filters, special effects or even color for that matter. 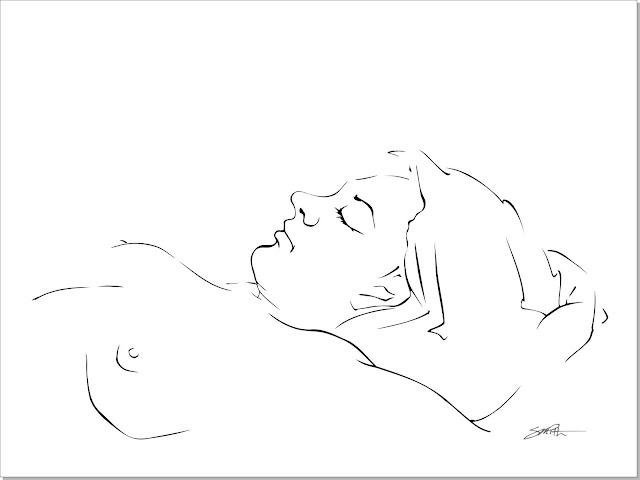 What was frustrating is the quest for perfection in the prints: my unrealistic expectations led me to several venues and backup plans when the quality wasn't good enough - mostly a matter of having the line print as a nice, rich black - without any other blemishes, smearing or random spottage appear on the 99% of the image that was just pure white. Also the opacity of the paper was a factor, and I would up utilizing the art department's resources and some nice double-thick matte finish paper and a 42" Epson Stylus printer (thanks to tech support from Todd Sherman).

The hardest part of this entire process after printing the images is assembling everything into frames: having two cats, a dog (and being a hairy Northern barbarian), the fighting the inexorable battle against static electricity sucking shit under the glass takes longer than making the damned artwork. And there is an exponential attrition rate that sets into play with any art ready for display: nicks, scratches and other damaging dings appear as if by magic, and the logistics of transporting the pieces can be risky.

I'll update this post with the news one way or the other after the juroring on Tuesday... but in the end it doesn't matter if any get into any show: it's nice to be validated by the opinion of others (informed or otherwise) but the satisfaction and pride of seeing one of your visions successfully manifested is worth a lot. Even someone as jaded as me can still get a kick outta that "ooh coooool!" moment...

"The days you work are the best days." - Georgia O'Keeffe

UPDATE 1/2/10: So at noon on the last day for submissions to be accepted (deadline is 5pm tonite) my entry numbers were #8-#11. That's a terribly pathetic turnout - worse still was the three paltry pieces turned in to the companion show "Re-Cycled/Re-Assembled/Re-Used" - if this is the sort of response from the creative community at opportunities like this then maybe the arts scene in Fairbanks does deserve to wither away and die.
The flip side of the flaccid support is that perhaps by nature of the medium, digital media doesn't belong in a gallery to begin with?
Maybe the fact that it's still thirty-below-zero?

Anyways, the fees were paid ($5 per entry), entry numbers assigned, corresponding labels affixed to the artwork (which also covers up signatures or names if any are displayed on the front of the pieces) and condition reports filled out duly noting any blemishes, streaks or damage.
Another aspect of feeble participation is that it undermines the validity of any accepted works: you never know if they got in just to fill blank spaces on the gallery walls, or even worse, if they don't get in an there was virtually no competition then that really sucks.

More updates to follow... The pieces are now enshrined at the Golden Eagle Saloon: see here for more info.
at 3:06 PM

Email ThisBlogThis!Share to TwitterShare to FacebookShare to Pinterest
Labels: Drawing