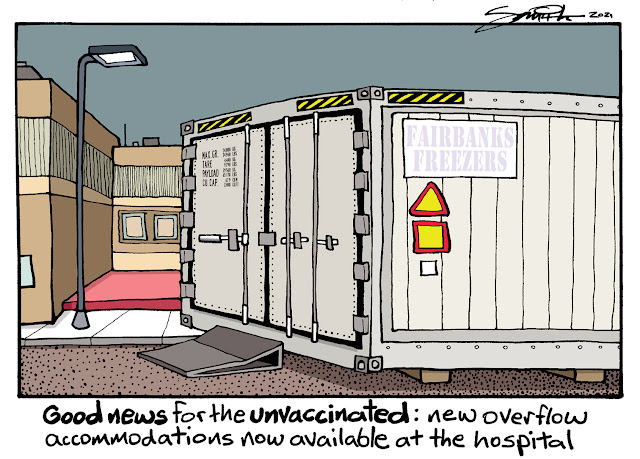 This editorial panel was never published. Not sure why, but I could hazard a guess that the content was a bit on the savage side, and maybe too brutal of a message to run in a family-friendly publication - which is why I still have this blog. Sadder to see how it's still timely, as the pandemic is still with us and people are still getting really sick and still dying. Maybe not in the sheer numbers anymore but now a host of other factors + variables are beginning to emerge, and a lot of folks still could use a visual slap. And personally I've long since run out of patience with denialists, even as there's still no shortage of patients. Honestly it was another cartoon that I initially had reservations on account of how grim it was, but gallows humor, while running the risk of pissing people off, is more often than not the coping mechanism for many in the trenches (it's worked for me), and after showing it to several people in the health care industry, and their reaction was all the permission I needed. 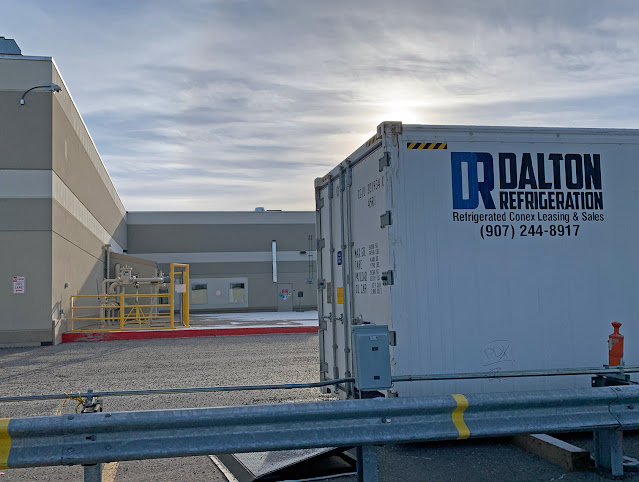 I had been tipped off about the overflow situation by a former student who was working as a nurse at the hospital while taking an art class for fun, in-between 60+ hours a week. Note: not the first time I'd only wished half of my students had such discipline + drive, especially under such extenuating circumstances. Another observation was since we'd all been wearing masks, the only part of faces that was ever visible was their eyes, and as with the adage about them being the proverbial window to the soul, one could tell how haggard things were getting. So that evening I took a drive downtown to see for myself, and it was sobering to say the least, and a stark reminder of the very real cost of continuing our epidemic of disinformation and fear. I posted my reference picture (above) on social media on October 22nd, and after garnering several hundred reactions + many comments + shares across the community, other media picked up on the story. The hospital was well into "crisis mode" and having to effectively triage incoming patients, and this was undeniable evidence of the situation.

Not that it was anything near enough to assuage the doubts of those who have bought into the conspiracy theories. One of the more disquieting follow-ups to a sizable percentage of the electorate subscribing to the ugly lies and outright criminality of the previous administration, is the eerily similar demographic that rejects science. This isn't how society is supposed to work, and I've given up trying to understand how, much less convince or even reach around half of my erstwhile fellow citizens that they are now living on essentially a different world. Much of it can be laid at the feet of those who work to undermine trust in basic services while endangering public health, and exist in a closed-system media environment that feeds itself a hateful, toxic bubble of self-reinforcing viewpoints (the echo chamber), completely unmoored from consensus and utterly detached from reality. Also, when it comes to basic issues such as trust, character counts, as does trust: it's a question of human decency. 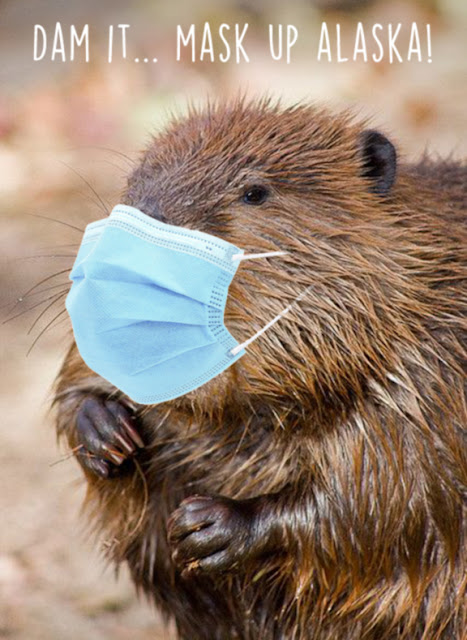 The stress, harassment, abuse, burnout and shortages facing the nation's health-care workers is dire, and symptomatic of a societal slide into existential anger from hopelessness and fear. As with the current resurgence in supposedly "pro-life" issues on the rise, the hypocrisy is revealing after our collective, cultural shrug about simple and effective measures to counter such national emergencies. America, your mask has slipped.