"The Fresh Test" (aka "Stick Your Finger In It") 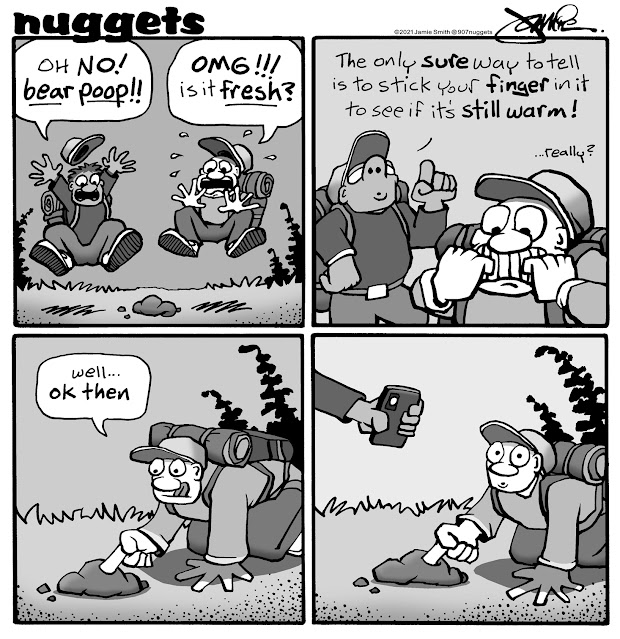 Confession time: like far too many sources of inspiration for my work, I've actually done this. For six years I trekked (three with other folks and three solo) across the old Kesugi Ridge trail, back when the entirety of it ran from Little Coal Creek past the Ermine Hill (halfway point), past the Byers Lake takeout (the current end of the trail) all the way to Troublesome Creek, so the full 36 miles as opposed to the shortened 29 miles now. That last six miles has been abandoned largely on account of how the last few miles paralleled the namesake river (mislabeled as a 'creek"), which meant frequent wash-outs and trail repairs.

The other significant issue in the decision was no doubt the fact that it was also a salmon stream, which necessitated closure during spawning season so as to lessen the potential conflict between humans and bears. I would time my trips to coincide with this by leaving my truck in the Upper Troublesome Creek parking lot and then hitching a ride back up to Little Coal Creek, thus ensuring solitude for the final portion of the trek. I remember sitting at the watershed elevation where my final campsite was located, and spotting through binoculars eight grizzly and black bears meander their way through the blueberry thickets, presumably snacking on appetizers before advancing down to the seafood buffet in the valley below. Knowing you would have to run this gauntlet does absolute wonders for sharpening one's situational awareness. Soon a perfect alignment of factors developed: hiking through grass too tall to see any distance ahead + a wind blowing the wrong way (ie carrying your scent away from your direction of travel) + a water flowing so loud the traditional "HEY BEAR" chant was rendered useless.

About this time was when piles of bear scat began appearing on the trail every ten feet or so, and you bet I at first attempted to determine their relative freshness. I eventually did have the first of what turned out to be many bear encounters over the years when rounding a bend and seeing a big grizzly mid-stream fishing for salmon about 25-yards away (years later I had a transcendent experience skinny-dipping nearby, skimming along with the current and pushing between two boulders to get dumped into a deep pool full of panicking fish). So I froze and stared transfixed for my very first in-person alone-in-the-wilderness encounter. It couldn't hear me, smell me, or see me yet, and I did the first thing any self-respecting prey species would do: dropped my hiking stick, switched hands with the bear spray, hiked up one leg of my shorts, and... piddled like a scared puppy. Then the bear stood up on its hindlegs, looked around, whuffed and tore off in the opposite direction.

The final incredible highlight (of a truly epic adventure) was emerging at last from the woods at the edge of the parking lot and wondering at the giant, two-foot high wooden bird sculpture of a magnificent Great Gray Owl that was sitting on a post maybe ten yards away. Then it turned its head in a complete180° at me, causing me to jump and then spread its immense wingspan to silently fly directly at and then over me.

The ranger had left a hand-written note under my windshield wiper to "lock up when you're done," having only jury-rigged the padlock on the now-closed gate.

After all that I did get a good (but really, are there any bad ones?) poop joke out of the experience. 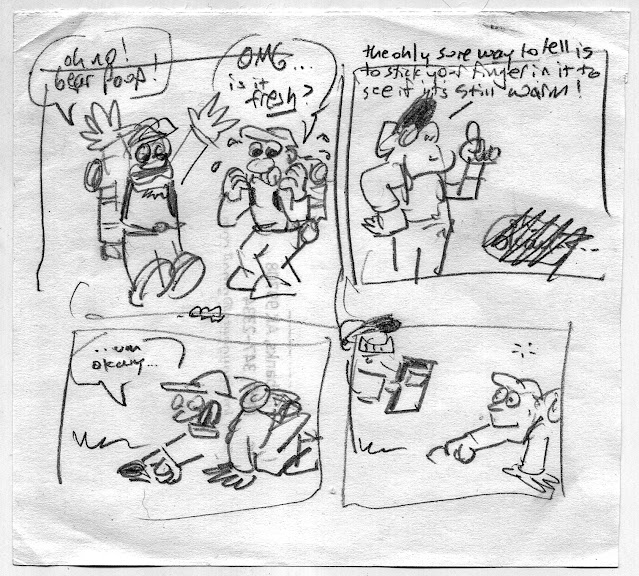