One of the more popular and better logos I'm known for in this town would be the created one for LuLu's Bread & Bagels - one of the two top coffee joints and by far the best bread. The owners recently contacted me about a remixed variation on the theme which will accompany a new line of gear and various accoutrements and ephemera. Once establishing how much of the elements from the "old" version they wanted to carry over, it became a matter of figuring out what form would work best - circle or oval. The core of the design is the juxtaposition of image + text: the original funky doodle was sketched out as an idle aside back when first developing the logo. Since the owners are both big fans of bikes and dogs, and the name of the business was after their one of their pets, it made for a whimsical graphic that portrays the image that the business wants to convey to the public. Plus its fun, very simple, easy to read and eye-catching.
Then it was another couple rounds of editing and tweaking, until a final set dimension arrived and everything gets redone all over again. Sometimes juggling the whims and incorporating last-minute wishes of the client can turn into the freelance Jacob's Ladder - which is a bit more potentially infinite as opposed to the usual domino analogy, but I've been fortunate to work mostly with folks who know what they want and like what I do.
Ensuring the legibility of the text (especially after reduction to 4" across) was crucial, along with maintaining the "brand-name" feel for the design while dealing with such limited real-estate. It always fascinates me how the balance of individual elements are so interrelated: a relatively minor shift in one part in turn affects the entire layout. When at last the final variation cut is settled on, multiple formats are burned so as to accommodate every conceivable usage in the future. The logo is now ready for reincarnation  on all sorts of things from stickers to tshirts. 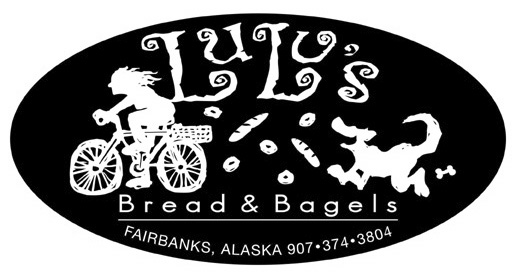 KRAMER: Alright! Toss me an apron, let's bagel! What are those?
MANAGER: Those are raisin bagels.
KRAMER: (Picks one up, he's mesmerized) I never thought I'd live to see that..
at 9:21 AM