Routine II (Off To See The Wizard) 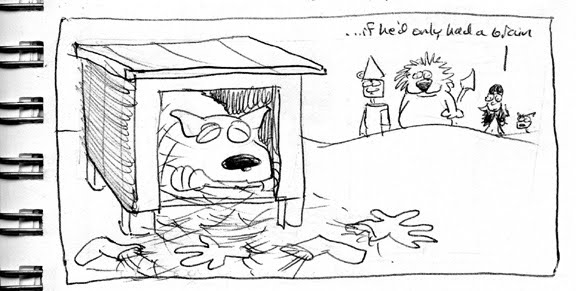 Here's another post for a panel that'll run sometime next month, part of the new series of "Top Posts" on the blog side-column where entries that offer a bit more in terms of process are tagged: think of it more as a "Pay No Attention to the Man Behind the Drawing Pad" write-up. This cartoon is also a good example of local humor - one should be aware that dog-house in the Arctic are usually flat-topped, and there's a brisk business in keeping kennels stocked with warm, dry straw throughout the Interior winter. Oh and having seen the Wizard of Oz probably would help too... 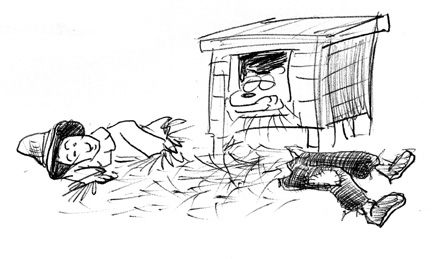 A familiar routine to regular readers that starts in the outhouse with an idea, or expunged from the ol' sketchbook mulch-pile (above panels). Below is a quick scan of the initial rough done with pencil on Bristol Board, and some random issues worked out on the fly: 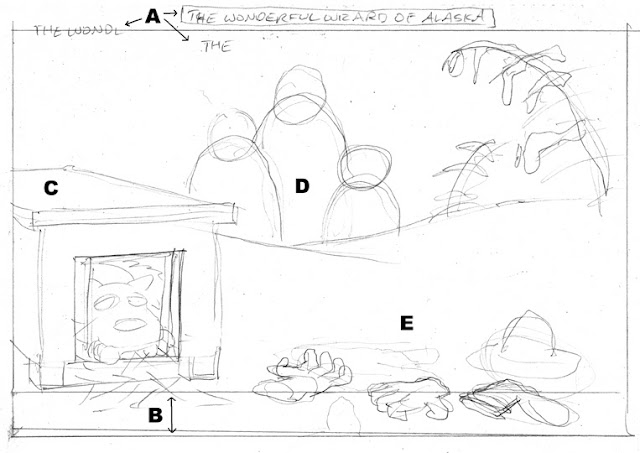 This is the loose and open-ended phase, and here I'll point out here some of the changes that normally happen during the course drawing a cartoon:

A) There's a couple false starts on placement of the caption box which are resolved by finally putting it up above the panel border, where after inking and scanning it can be grouped, moved and centered wherever.
Having the knowledge that these panels will eventually be scanned and converted into a digital (vectored) drawing frees me up from sweating the small stuff at this stage. Though there are the times it affords me the luxury of being a total slob. The trade-off is in not having an "original" worth selling afterwards, so I usually try and make the pen + ink version as close as possible to the print version, plus it does save time on editing.

B) Extension of the initial, arbitrary dimensions of panel border in order to accommodate the final composition (in other words, I ran outta room).
The majority of my cartoons tend to be plotted out first on a default horizontal panel, unless it's a gag that has been doodled out requiring a vertical layout, and then flex with the needs of the drawing as it develops.

C) "Underlapping" elements by tucking them off-panel helps create an impression of depth, plus allows for more room to enlarge and spatially arrange other items on the plane.

D) Rough areas are blocked out for what will eventually be refined into the trio of figures, after some reference gathering to get the costumes right. Also shifted the group to the center of the design, dropping in a couple snow-laden spruce trees on the extreme right for environmental cues and enhancing pictorial depth (as well as making a "pointer" shape aiming back down to across the panel and framing in/blocking in the right side).
The three main grouped areas of detail from left to right (trees>figures>doghouse) function to lead the viewer's eye down across the composition diagonally: from after reading the verbage, across the panel, and dumped out at the strewn remains of the Scarecrow.
This cognitive process in "reading" an image is the equivalent to timing and pacing in the delivery of a joke, even though it all occurs within a matter of seconds: awareness of and deliberate arrangement of these visual elements can be a subtle tool to manipulate or direct interpretation.
I've argued that a single-panel gag cartoon still can technically "qualify" as a work of "sequential art" even without the requisite panel borders clearly delineating the illusion of the passage of time (some would argue otherwise) - it's just a matter of perception broken down on an even smaller scale, distilled within tighter confines of a single panel.

E) Another relatively minor call here to scatter the objects out much farther than as in the original doodle; this again serves to guide the reader's eye back across the panel and exit stage right...

The next phase is taping up the paper to a sheet of plexy, hunch over the drawing board and get to work. Some tools used: T-square and rulers; pencils (softer lead for sketching, harder for refining details); permanent black India ink; a thick (mostly foreground elements or things I want attention called to) and a thin (for medium line-weights) dip-pen + crow-quill for extra-thin lines; an old beat-up brush for doing the spruce trees; a hair-dryer to hurry up the drying; PITT or Micron pens for lettering text (medium), border (thick) and touch-ups (thin), and a soft plastic eraser; and lastly an Xacto knife to trim away excess paper before scanning and finishing up on the computer (details on that process here). The finishing touches are added, such as some snowflakes, beefing up words for emphasis (i.e "like this") and a signature.

Using cartoon shorthand means one doesn't really have to worry overmuch about mastering all the nuances of the characters - just enough visual cues to trigger an association and memory. However, after a quick Google image search for handy reference (sometimes it's a great excuse to pop in a DVD - "no I'm working!") it occurred to me I'd forgotten one of the main figures - which led in turn to a last-minute course correction, and now instead of the caption box above, there's a much better punch line below. This also inadvertently freed up a wee bit more space to expand the panel border's height so as to add some more breathing room.

So put another way, a funny thing happened on my way to the computer... and here's the inked/line version: 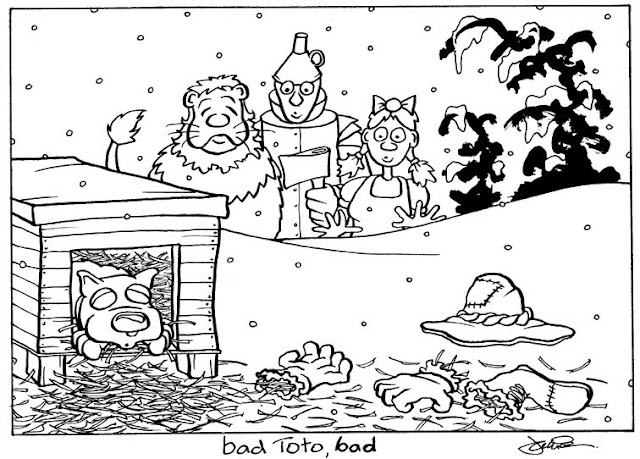 To be sure, not much of this actually surfaces while working. All these minute "behind-the-scenes" decisions are a small sample of the constant stream of aesthetic choices artists make, largely unconsciously and while engaged in the Verb of Art, the act of creation. And while belaboring the obvious, this whole damn post points up the "dissecting a balloon" theory behind an in-depth analysis of what makes a cartoon funny. Talk about drawn out! But reflecting on what makes a drawing work the way it does is an awful lot like teaching: and it's interesting to occasionally slow down and force oneself to annotate the process by focusing awareness on exactly when, where and why some of these seemingly arbitrary decisions are made. Of course, it should go without saying that absolutely none of the above is ever the only way, and many times the best work just happens, with whatever is at hand. 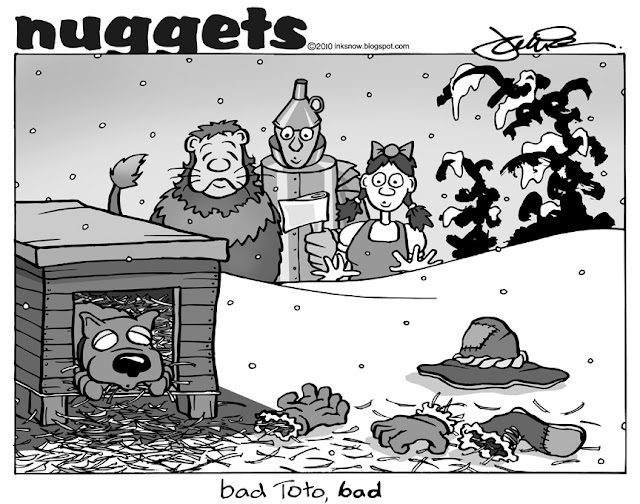 "Why, anybody can have a brain. That's a very mediocre commodity. Every pusillanimous creature that crawls on the Earth or slinks through slimy seas has a brain. Back where I come from, we have universities, seats of great learning, where men go to become great thinkers. And when they come out, they think deep thoughts and with no more brains than you have. But they have one thing you haven't got: a diploma." - The Wizard of Oz