“They call me the painter of dancers. They don't understand that the dancer has been for me a pretext for painting pretty fabrics and for rendering movement.” - Edgar Degas 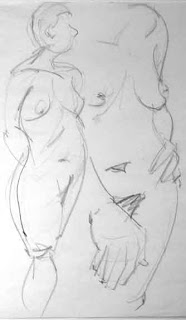 So today's the day we cover the last facet of beginning drawing; life drawing, using a model for the last four sessions of the semester. Usually the drill goes: gesture drawings for warm-ups, about ten minutes of 1-minute poses, then five 3-minute poses and five 5-minute ones before taking a break. These are typically standing poses, which is pretty demanding of the model (toughest student job on campus), but I use seated and/or reclining poses when we finish out the class with a couple 20-minute or one 40-minute pose. For the former the students use newsprint and pencil, the latter drawings I have them switch to good drawing paper and work over the pencil roughs with charcoal, and resurrect the familiar refrain of "full range of values/smooth transition for the gradations from darks>lights" and blending with fingers or towel + subtractive technique using eraser/ For the longer poses I gradually begin to stress integrating compositional elements; framing and cropping, maybe using a panel border.
Gesture sketches are crucial to the process of rendering the human form; it's a new way of drawing in that we have now evolved into an upright, standing posture, using an easel now instead of a table, and draw from the shoulder and arm as opposed to the wrist for tightly controlled marks (like with pen & ink). For the initial sketches, I also have them experiment with gripping the pencil differently than they would if they were writing with the instrument, as this encourages looser, more gestural marks when it is an an unconscious extension of the hand>arm>eye. 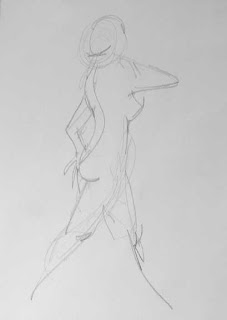 Loose, light marks at first to visually "feel out" the subject (so there's no need to waste time & energy erasing), with increasingly bolder, darker lines when the shapes get sufficiently blocked in and contour lines can become indicated with more confidence. I prowl around the room prodding folks to not get hung up on any one area, to stay fluid and in constant motion, draw bigger, exaggerate elements for foreshortening, checking relative proportions, sketching in the underlying infrastructure and identifying the key lines which will help define the forms in space with a strong sense of volume and three-dimensionality. This sketching helps in mapping out compositions, and solving a common beginner's problem of the dreaded “running out of room” phenomenon (headless & footless models).
Personally I have always enjoyed and depended on gesture drawings and working with models; even though it might not be readily apparent, I believe every artist, regardless of medium or experience, stands to benefit from constant practice and a disciplined approach with life drawing. I emphasize to the students how increasing the sheer volume of work generated by these life drawing sessions oftentimes ups the odds in favor of scoring a decent piece or two - they seem to come about when one is least paying attention and is instead engrossed in the flow, instinctual, reflexive participation in the creative act - art as a verb, not a noun. The drawings left scattered about the studio floor are essentially leftovers, evidence of a result of this act - many times I prefer the rawness in spontaneity and the lively, organically expressive, dynamic qualities inherent in gestural works more than the contrived, self-conscious pieces of longer works. 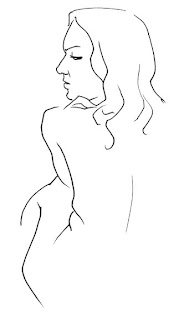 There is a strong link between gesture drawing and cartooning; distilling the essence of forms into concise, descriptive lines, boiling it down to the barest elements is at the core of many characters and panels. Professionally trained animators in particular have usually honed their powers of observation to the point where a passer-by need only pause for a few seconds in order for the artist to capture the moment, the gesture. I am always remembering the lessons from my old art teacher of many years, Larry Vienneau, who was an avid archer, and whose lectures liken "Zen and the Art of Archery" to drawing: the practiced ease which an accomplished archer steps up and in one motion selects and arrow, fits it to the string, pulls back the bow, sights and releases - keeping the eye on the target, and the arrow follows their sight. This is the same fluidity I aim for in responding to the model, as the hand/eye coordination is an unconscious, integrated reflex where one isn't even really aware of the instrument any more.
Furthermore, I make brief mention of how there are many more opportunities at both the institutional level (with upper-level studio art courses devoted entirely to life drawing) and in the Fairbanks community to pursue working with models. There are a few groups in town, connected with either a studio group, gallery or individual artist, that meet regularly which rely on a small fee to reimburse the model for their time. There's also a weekly open drawing session in the art department every Friday where students can practice working with models, which I strongly suggest folks from my classes attend. It is also encouraged for art majors to take an Anatomy & Physiology course which deals with musculature and skeletal systems - in much the same way I'd recommend someone interested in landscapes to take geology classes. Deepening one's understanding of what's really going on under the surface will reward you with a better appreciation of the subject and ultimately result in better works. That said, I acknowledge the diversity of methods and schools in teaching and training folks to draw the human figure; I rely on the simple principles of direct observation - however many heads-high someone is will change with perspective, so standardized, formulaic approaches are limited in their practical application. The reliable "draw what you see" seems to work best for me in all my classes; there's plenty of material to work with, even limiting it to just training the eye to see. 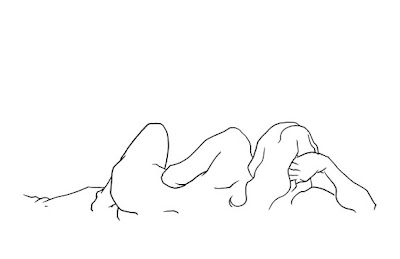 A side-note regarding the hangups many students have with nudity (not necessarily with life drawing, but there is that uncomfortable overlap). Seems every year there's at least a couple folks who will have objections to drawing nudes, and I make accommodations if their reasoning is sound; to this end I can let them work on parallel assignments, albeit without the benefit of oversight and group feedback. More often than not though, I strongly suspect bullshit in many cases; like a transparent last-ditch effort to salvage a failing grade, and I go out of my way on opening day to make it clear I need to hear about such reservations then, not the day before we start with models. False piety gets nowhere with me, and I also have little patience or respect for someone mindlessly aping what another person has fed them as what constitutes morality. Usually they see what they bring with them, as in there's already a way of looking at the human body like it's dirty or obscene - that tells me far more about the person saying such nonsense than anything else. If it's just a matter of prudishness and being uncomfortable, well, it's on the same level as dissecting worms in high-school biology lab; get over it.
That said, there are legitimate reasons I will excuse students from teh scary naked people; religious issues mainly, as well as for political or ideological reasons. These folks I send home with a printout of this excellent piece that covers all the, ah, fundamental disagreements I've experienced teaching drawing.
Potentially this is an area fraught with controversy, not the least of which is emphasizing an atmosphere of respect and trust. There is no tolerance of any disrespectful or salacious comments or attitudes - that's one swift way to get your ass kicked out of my class and banned from the department. This is a serious and respected field of study which is historically justified and traditionally withstood unending attempts at censorship or suppression; there is nothing remotely suggestive of immorality, deviancy, obscenity or even eroticism in this when presented properly. Of interest to me however, are how the concerns of Postmodernism and Feminist art theory affect figure drawing, along with both my own work as an artist and a teacher, which I'll briefly delve into the next posting or so. 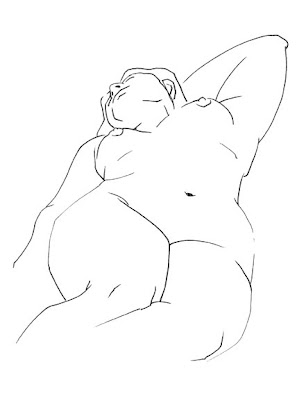 “While we sketched from a model, Gleyre criticized my work: "It is not too bad," he said, "but the breast is heavy, the shoulder is too powerful, and the foot too big." I can only draw what I see, I replied timidly.” - Claude Monet
at 6:20 AM