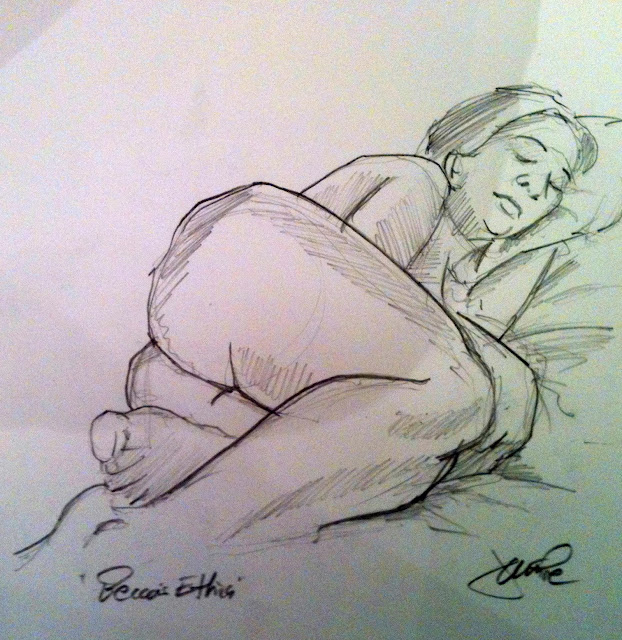 What with such high enrollment, the couple really big drawing classes translates into not much time to sit and sketch something while we have a model. Normally I'm kinda like a classroom shark that circles quietly, waiting to help out with whatever a student may have a problem with. That and not a little bit of art-drill-instructor: "On your feet" (when drawing at an easel and doing figurative work - especially gestures - it's important to draw from the shoulder, using the arm, as opposed to drawing using the wrist and hand, like with pen & ink); "Shift yer grip" (again, instead of holding the pencil as you would if doing pen & ink, try wrapping the hand around it's length so as to better facilitate it becoming an unconscious extension of the hand/arm/vision); "Draw bigger" (increasing the real estate by which to explore the form); "LOOK at what you're drawing" (we are reverting back to the very first, fundamental lessons in the semester, including using the pencil as a measuring device and/or a tool by which to compare relative distances and lengths), etc.
Half the time I feel like I should bring in damn pom-poms because I get so fired up watching everything come together for the students at this juncture of the course. Those are the times I often just murmur kind words of support and encouragement while in passing, pausing to point out particular poses of pure awesome - they really start to produce some seriously amazing pieces, and it's a real creative kick in the pants to witness.
It's also a nice, uh, gesture to send the model home with a sketch or two, as it's a student job and they don't get paid half as much as they should. So oftentimes I'll take the opportunity to do a quick five-minute demo for a few folks, which in turn can be given to the model. 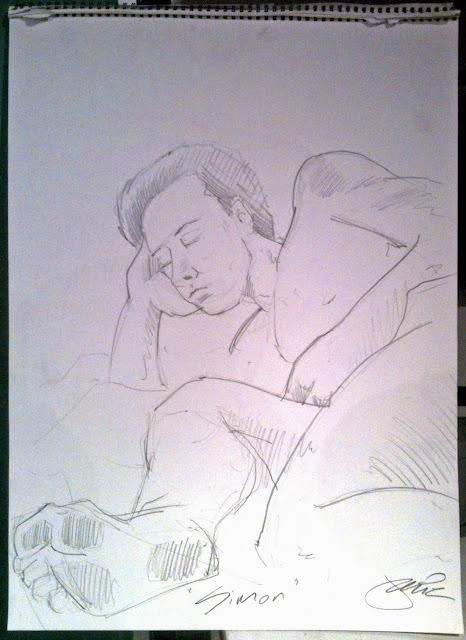