Lost in the Fog/Harboring Grudges 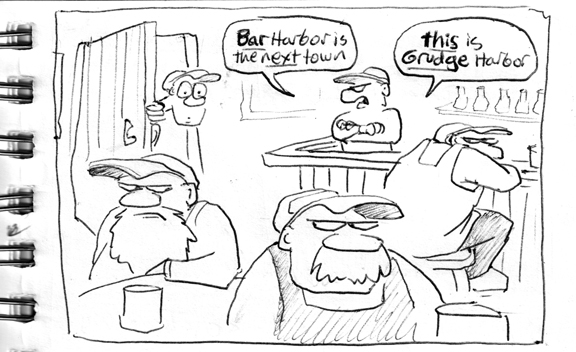 Put in five eight hours of driving this week to shake the bushes and see what falls out as far as funnies go. The coastal highway (US Route 1) winds its way around the shoreline of Maine, and in theory, is some insanely beautiful, picturesque scenery. That is, unless one picks the foggiest day ever for a road-trip.

True story: in a scene reminiscent of the climactic ending to Frank Darabont's excellent 2007 horror film based on Steven King's short story "The Mist" - I had my "soundtrack" playlist cued up in the truck. In retrospect, "The Host of Seraphim" is probably the absolute worst (or the funniest) tune to have on in the background while creeping around thick fog looking for the where the hell you are supposed to be.
The next time I hear a local give directions and include "you can't miss it" I'll either start crying or laughing hysterically (or both): I'm the guy who keeps getting lost on a damned island.

Email ThisBlogThis!Share to TwitterShare to FacebookShare to Pinterest
Labels: Doodle, Down East