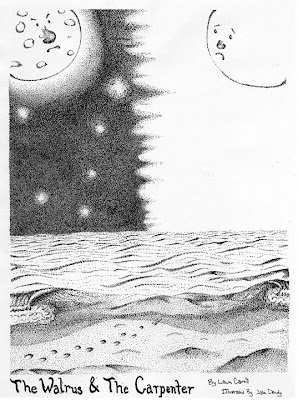 "If you're ever feeling like what you do is not important, just remember you're a crystal in a world full of fungus. Everything you do is extremely important, so just keep on doing it." - Lyn Lecuyer

While the class was otherwise occupied with their in-class caricature exercise I disappeared into the art department office with their collected pages for the fourth critique. The goal was to put out sixteen sets of collated, double-sided copies of forty-six re-sized new masters taken from the originals. This took a little hurry-up-and-wait (staring at the copier as it collated) punctuated by insane stress (discovering some upside-down pages), but with literally minutes to spare before the end of class I was able to run back and send folks off with a nice parting piece. Not to mention stoning out the new administrative assistant with the aroma of toner. 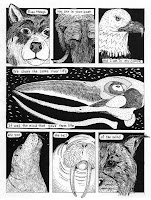 I worried that after such a long, intensive span of time spent focused on this particular assignment it would be anticlimactic to not have some sort of formal review. But my hopes were to offset any potential disappointment by presenting everybody with their own photocopied set of all the work turned in to take home with them over the long holiday weekend to mull through in private. As an aside, I was very pleased that fourteen out of fifteen students completed their pages, with one individual cranking out a total of seven pages - this from one of the semester's most worrisome underachievers, so it's always an unexpected bonus to witness firsthand someone finding their niche as it were. 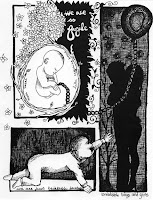 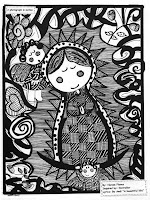 Also I mentioned to them in closing that so far this was by far & away the most impressive overall effort by any beginning class to date. Someone then said "Aww, you're just saying that" to which I could quite truthfully reply that knowing what they do of me by now, does anybody really think for a minute that I'd not be totally honest, if not blunt about anybody's art? 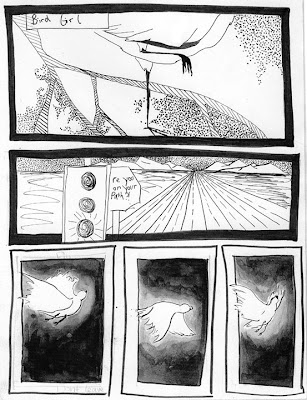 "Comics, at least in periodical form, exist almost entirely free of any pretense;
the critical world of art hardly touches them, and they're 100% personal." - Chris Ware