“A successful person is one who can lay a firm foundation with the bricks that others throw at him or her.” - David Brinkley 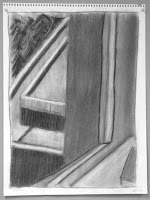 Arrived really early; makin’ copies, grading the last assignment and wading around the knee-deep snow outside around the building harvesting dried leaves for today’s in-class exercise. Started off with the critique; this time with rigid, military-like precision, as there was so much to cram into today that I needed to keep everything moving right along. Several students I was very glad to note made significant breakthroughs with their pieces; the overall quality of the work wasn’t exactly up to par, but each unto themselves merited special note if only for that. And a couple other students catapulted into wow-ness, putting up some flat-out impressive efforts, setting the bar high for everyone else. 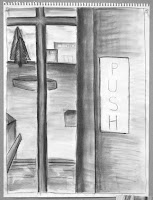 A couple individuals came so late that even after surreptitiously tacking their pieces up I pointedly overlooked ‘em anyways. I recall a comment from one of the teachers who I respected a lot in graduate school; he let it drop that, in his opinion, whenever someone shows up late to one of his classes, basically what they are saying to him is “fuck you.” Needless to say, after that, everyone was prompt. I don’t necessarily adopt the same outlook, as I don’t tend to really take it all that personally, but it helps put habitual offenders in perspective. As for the show, pleased to see slowly but surely everything dovetailed together; 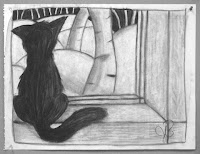 a little linear, little atmospheric perspective, some nice gradations between a full range of value (including some rich darks) with sooth transitions in-between, a touch of subtractive technique, maybe a hint of white conte crayon, thoughtful and purposeful composition, a real sense of depth to the pictorial plane with added overlapping and foreshortening. A small batch even made it up into a hallway display in the spiffy new cases that we just had installed around the department. 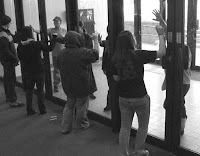 Right after the review (around 45 minutes), a brief introduction to the next area of focus; contour line, and how beautifully effective it can be at defining an object in space, giving further descriptive qualities and volume to shapes that linear perspective and/or value fail to adequately render. We ran down the hall to some convenient doors to split up – half the class taking up position on one side, arm extended while resting one hand against the glass, the other half taking up dry-erase markers and standing opposite.

Directly facing their “partner”, and while maintaining their position (not moving at all except for their drawing arm), they then did a contour drawing of the entire figure. Briefly before that I had picked a volunteer and did a demo with running narration on exactly it is done; what , how and why, plus hints (like closing one eye while drawing). This also had a couple added bonus lessons; yet another quick & dirty approach to de-facto figure drawing, plus a grand-slam demonstration of foreshortening. After five minutes or so, the students traded off, reversing positions, and so on for a total of two drawings per person + two modeling stints. Now the janitors probably don’t appreciate the wall of graffiti we left, but it causes no end of puzzlement and amusement for at lest the rest of the day to folks entering the building.

After a ten-minute break - the door exercise taking approximately half an hour - I pass out photocopies of both the next assignment and the next critique (which is a long ways off, but they need to know why we are going on Thursday’s field trip, as it’s for reference sketches directly related to their next big piece). As per usual routine, a ten-minute show & tell of samples from other classes, questions and additional explanations. Also a couple other random announcements, as this upcoming Friday is a “First Friday: with some exhibitions of note (the best one by far is a show that we will be taking a special field-trip to see towards the end of the month, so they are told to skip that particular gallery), plus the International Ice Art wraps up the multi-block competition this weekend, always worth a visit. Lastly I drew a map on the board to where the class will be meeting on Thursday, and noted what materials to bring (just their sketchbooks – containing their homework of the thumbnails for Assignment #3 – and a selection of pencils). 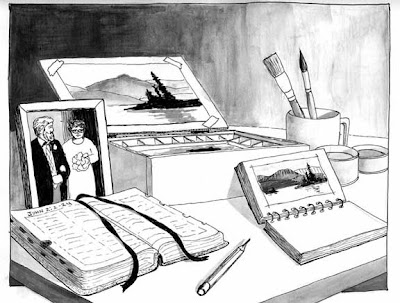 ASSIGNMENT 3: PERSONAL STILL-LIFE
An assortment/arrangement of objects/items/mementos that reflect you, your interests…think shrine, symbols, sepulcher…
Graphite + Wash on Bristol board (9x12”)
Emphasize contour line, also perspective & use full range of values in the composition.
*thumbs (2 panels in sketchbook) due Thursday, March 5th - Final piece due in class for review Tues. March 17th
_______________________________ 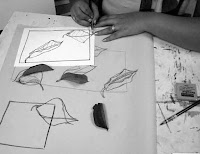 Then I passed out three painstakingly hand-selected, exquisitely contorted leaves per student, and they had about ten minutes to knock out a couple rough compositional studies, focusing on contour line and arrangement of the elements within a panel (also playing with breaking the border with overlapping, tucking forms underneath for layering depth, and experimenting with horizontal + vertical formats). Then in the meantime I also passed out pieces of some thick watercolor stock for them to do one finished drawing in graphite on, using simple, bold, crisp and clean contour linework – and when that was completed I did a demo on how to use the wash pencil (“Derwent Sketching” brand) to achieve quick value studies. At the end of class we gathered around the central table to compare & contrast and add a few more points of technique over adding yet another tool to our growing repertoire.
After a whiplash tour-de-force day in the studio like today’s blitz, it’ll be a nice, relaxing change of pace to just concentrate on sketching for the entire session on Thursday. For everyone. 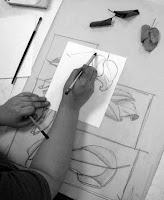 A personal side musing: there are some mornings like today when I wake up, and while during the outhouse interlude, I’ll just get deluged with ideas and inspiration; and I sit and wonder what it’d be like to have “just one more day.” Because usually the morning after I’ve spent twelve or fourteen straight hours immersed innon-stop creative output, I really. really hate shutting off the spigot, breaking that rhythm and interrupting the flow. It’s like taking a Sunday drive versus a road-trip. Makes me somewhat (a wee bit, mind you) sympathetic towards students who are juggling a full load of classes while still trying to meet my expectations, along with maybe a job, and a life. It confirms the hypothesis that the crucial and determining factor in the equation is … more often than not … simply time. That’s evident in looking over the pieces today; easy to see who invested time into their work, took some basic pride of craftsmanship and ownership as the creator. That’s all I really ask; is to please just take it seriously. After a round of grading like this morning there’ll maybe be a third of the works bearing post-it notes that have a “please see me for specific suggestions” line on it, and usually only some of the students take me up on the offer to stay after class and get some customized individual attention. The rest you have to let go, knowing you did what you could, and hey, it’s college – can’t baby-sit or force them to go that extra distance. It’s one of the harder lessons to learn for myself; sitting alone at home in the cabin and staring down my own blank sheets of paper at the drawing board.

“Very few people possess true artistic ability. It is therefore both unseemly and unproductive to irritate the situation by making an effort. If you have a burning, restless urge to write or paint, simply eat something sweet and the feeling will pass.” - Fran Lebowitz
at 7:43 PM